The challenges of mobile game adoption are real. While it’s relatively easy for consumers to access and buy mobile games through marketplaces like the the Apple App Store and Google Play Store, Verto Analytics’ latest report on the mobile games industry reveals that fewer than 20 percent of mobile gamers stick around after 30 days; even fewer make in-app purchases.

While this ecosystem has allowed indie games like 2048 and Flappy Bird to achieve “hit status” and successfully compete among developer heavyweights such as Supercell and Zynga (and, most recently, Nintendo), how can a single mobile game stand out among literally hundreds of thousands of available selections?

Dramatic drop-offs: do you know yours?

Verto Analytics attribution analysis reveals rapid declines in mobile games usage within the first 24 hours. Depending on the title, 40 to 60 percent of users drop off within the first full day post download.

Moving beyond the first few days to 30 days post download, average retention figures drop to between 10 percent and 20 percent of users who have successfully installed the game. In other words, fewer than two out of every 10 successful game downloads retain users after 30 days. For a title like Pokémon Go, the first 30 days on the market is a critical time, as spiking user adoption rates level out and the media hype fades.

Tracking further out, the number of remaining users who participate in in-app pay features within games apps is smaller still — remarkably so. According to a study by GameAnalytics, less than 3 percent of all active players account for all in-game player revenue.

As detailed in the figure below, all app categories — even social and shopping — must contend with the stark realities of the sampler segment. By day seven, apps in some categories may see user retention rates drop to a mere 20 percent or even lower as the weeks progress. 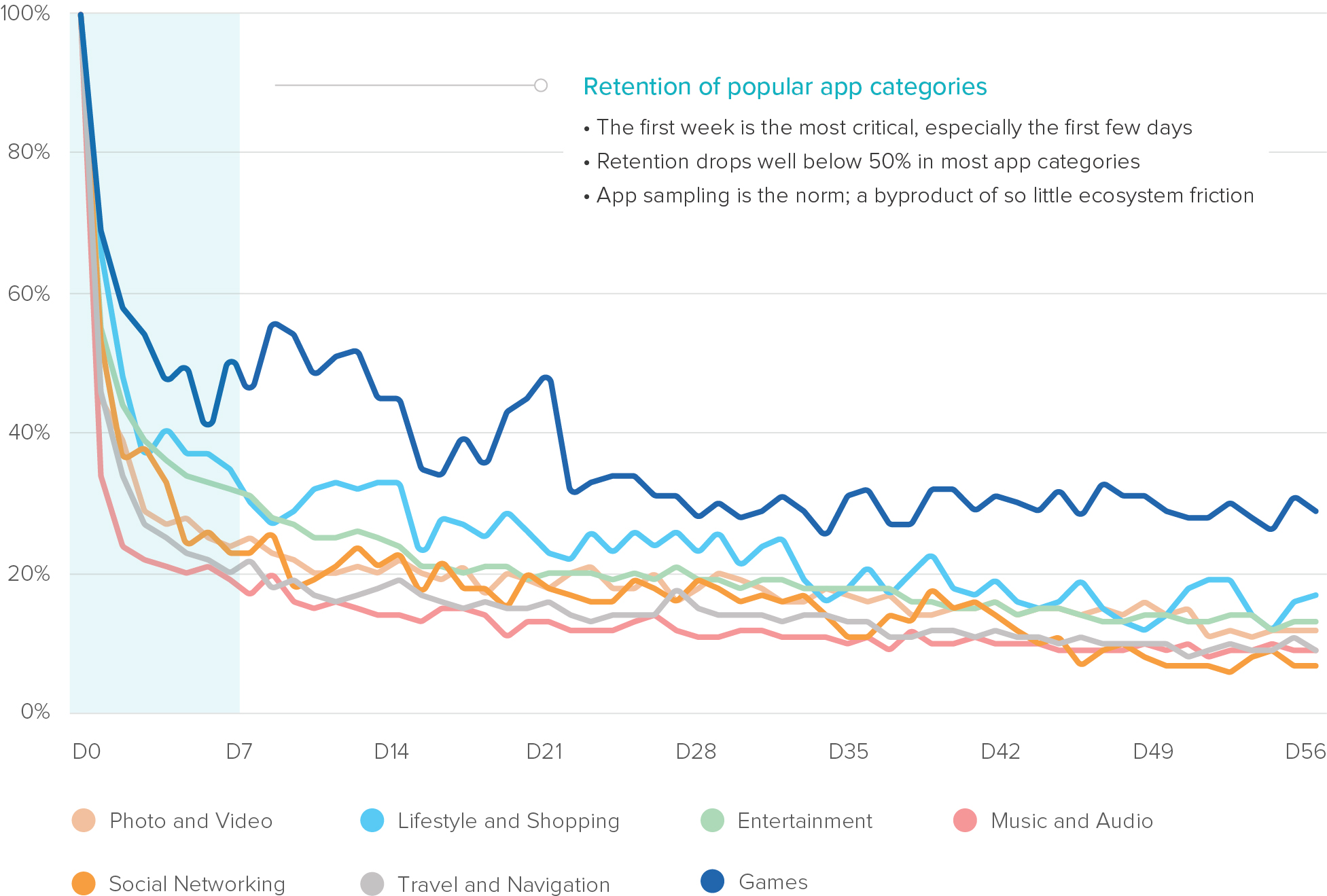 The games category has a slightly more positive adoption story to tell. Boasting some of the most passionate users, mobile gamers tend to be somewhat more selective with their download choices. As seen in the graph above, retention rates for mobile games consistently outperform all other categories over their first two months of use. For example, a comparison of four popular mobile games shows that each has a slightly different retention makeup, as seen above. For example, strategy game Clash of Clans (CoC) boasts some of the most loyal users, with retention rates flirting around 60 percent for several days during the first week of usage. 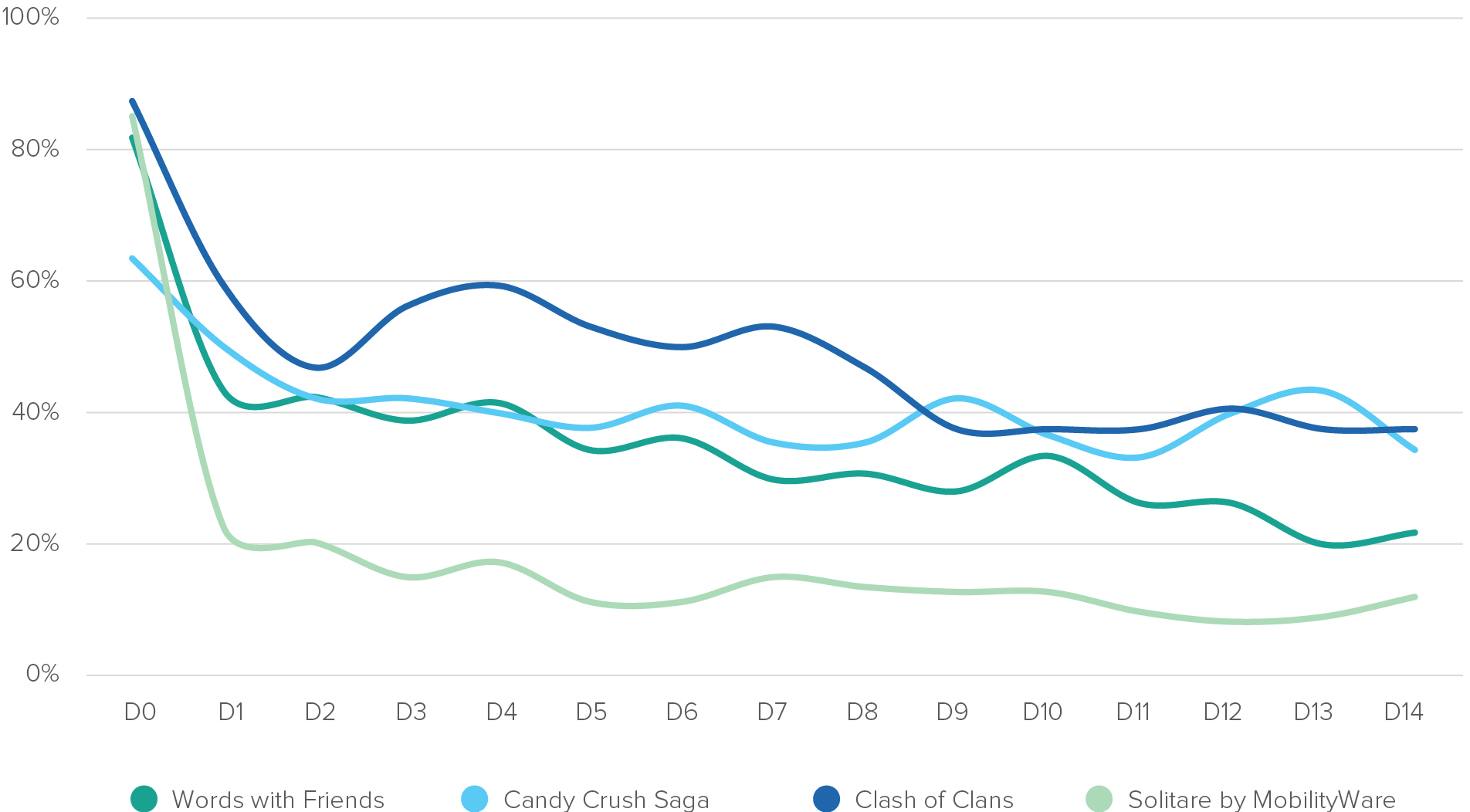 Conversely, a mobile game like Solitaire by MobilityWare is hugely popular, even though card games have multiple variations available from multiple developers. However, it is consistently challenged by lower-than-average retention rates (20 percent by day one). Though samplers may try the card game, many quickly move on and seek a different experience.

Every game (and user) is different

Each mobile game offers a slightly different adoption story — something marketers should keep in mind when considering their messaging strategies, especially if the goal is to foster greater player loyalty and improve overall adoption. But regardless of the mobile game, for any mobile game developer, marketer, or publisher, it’s critical to track user behavior along every stage of the app ecosystem and to identify how to engage the primary user constituency — the players who remain after the first few days and are potential candidates for a game’s core user set.