The MMO world is buzzing as Final Fantasy XIV grows more popular as World of Warcraft seems to be losing players. But the genre is also getting some new blood, including Amazon Games’ New World.

New World launches for PC on August 31, and its closed beta begins tomorrow (July 20). During a recent preview event, I played through the early portion of the game, learning its core mechanics and getting an introduction to its rugged fantasy world.

The MMO starts you on a shore after you find yourself shipwrecked. Here, you learn the basics. Unlike most games of this kind, New World has a focus on action. You don’t automatically target enemies. You have to position yourself so that you sword swings connect, and you need to block at the right time to avoid taking too much damage. It feels more like The Elder Scrolls and less like World of Warcraft.

You also learn that your weapon determines your character’s class. If you’re holding a staff, you’re a magic user. If you have a sword and shield, you have a mix of offensive and defensive abilities. Each weapon also has its own skill tree, and you can earn points for these by playing as those specialization. These skill trees can give you passive stat bonuses or new abilities.

Your character also levels up independently of your weapon proficiencies. When you gain a level, you can increase your stats. This will make you better with certain weapons. More points in dexterity will make you stronger with bows, for example. At first this worried me, since the system seemed likely to force players to stick with a certain playstyle. But Amazon Games told me that you can refund your points for free until a certain level, and then it costs just a bit of gold.

Soon after this introductory sequence, New World spirited me off to the game’s first settlement. Here I learned the importance of crafting. Most MMOs have crafting, but it’s often an optional and insignificant part of the experience. Here, it looks to be major focus. Many of the early quests send you out to gather resources like timber and stone. Then you return to town and refine them weapons or other materials. 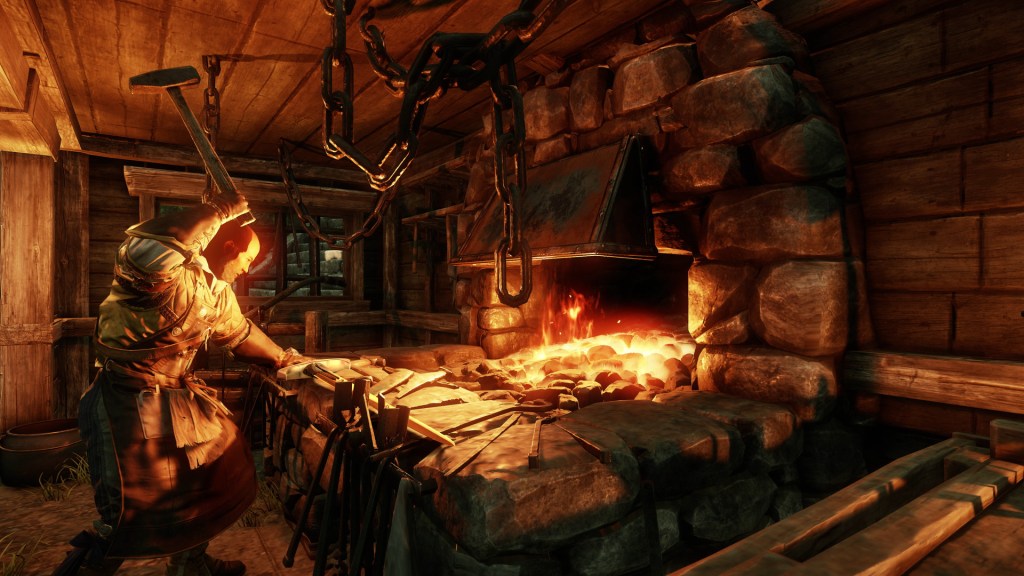 Above: Crafting plays a bigger role in New World than other MMOs.

The combat and mechanics are interesting. I’m a bit more worried about the aesthetics. New World goes for a more realistic, fantasy vibe. It can be a bit dark and dingy for my taste. Performance was also an issue. I’m not a huge specs guy, but I’m able to get other MMOs to run at a smooth 60 fps on my PC. But I was struggling to get New World run that well, even when I lowered the graphics settings. The frames would take an especially big dive when I was in town.

Now, the game is about to start its closed beta, so performance could improve before the full release. As far as the art, that’s more of a preference issue. I just happen to like brighter colors and more cartoon-like visuals.

But when it comes to MMOs, I’m mostly concerned about the gameplay, and New World shows promise. Even at low levels, fighting can be fun, since you have to worry about aiming your attacks and timing your blocks. In other MMOs, those early levels can be a slog where you’re just hitting the same three buttons over and over. It’s nice to have combat feel interesting right from the start.

I’m also curious about how the game’s social features work. At the start of any MMO, it’s impossible to get a sense for any of that. Sure, I was technically in a party with other players, but we were just running around doing our own things, occasionally running into each other and maybe helping take down a wolf together. I wonder just how much the full game will encourage (or require you) to adventure with others.

This preview was enough to make me want to play more. I’ll be curious to see if New World can take this promising start and deliver a fulfilling MMO experience.