The global market for cloud gaming will hit 23.7 million paying users and $1.6 billion n revenues in 2021, according to a report by market researcher Newzoo.

While that percentage is small, the numbers are still impressive, given how cloud gaming has had some false starts in years past with companies such as OnLive generating hype and failing to deliver. This report shows the latest wave of of cloud gaming technology to hit has grabbed traction in both users and revenues.

“The number of people who use cloud gaming services keeps increasing at a similar pace to the one registered in 2020, according to companies we spoke to. In terms of paying users, our forecasted growth rate is slightly higher than in our March 2021 forecast,” said Guilherme Fernandes, a market consultant at Newzoo, in an email to GamesBeat. “Existing services continue to see their userbases growing and new services are launched every month. According to our consumer research, over 90% of the players who know what cloud gaming is have either already tried it or want to try it. Moreover, satisfaction rates among those who use cloud gaming are also very high. Thus, consumers are increasingly receptive to this new technology.” 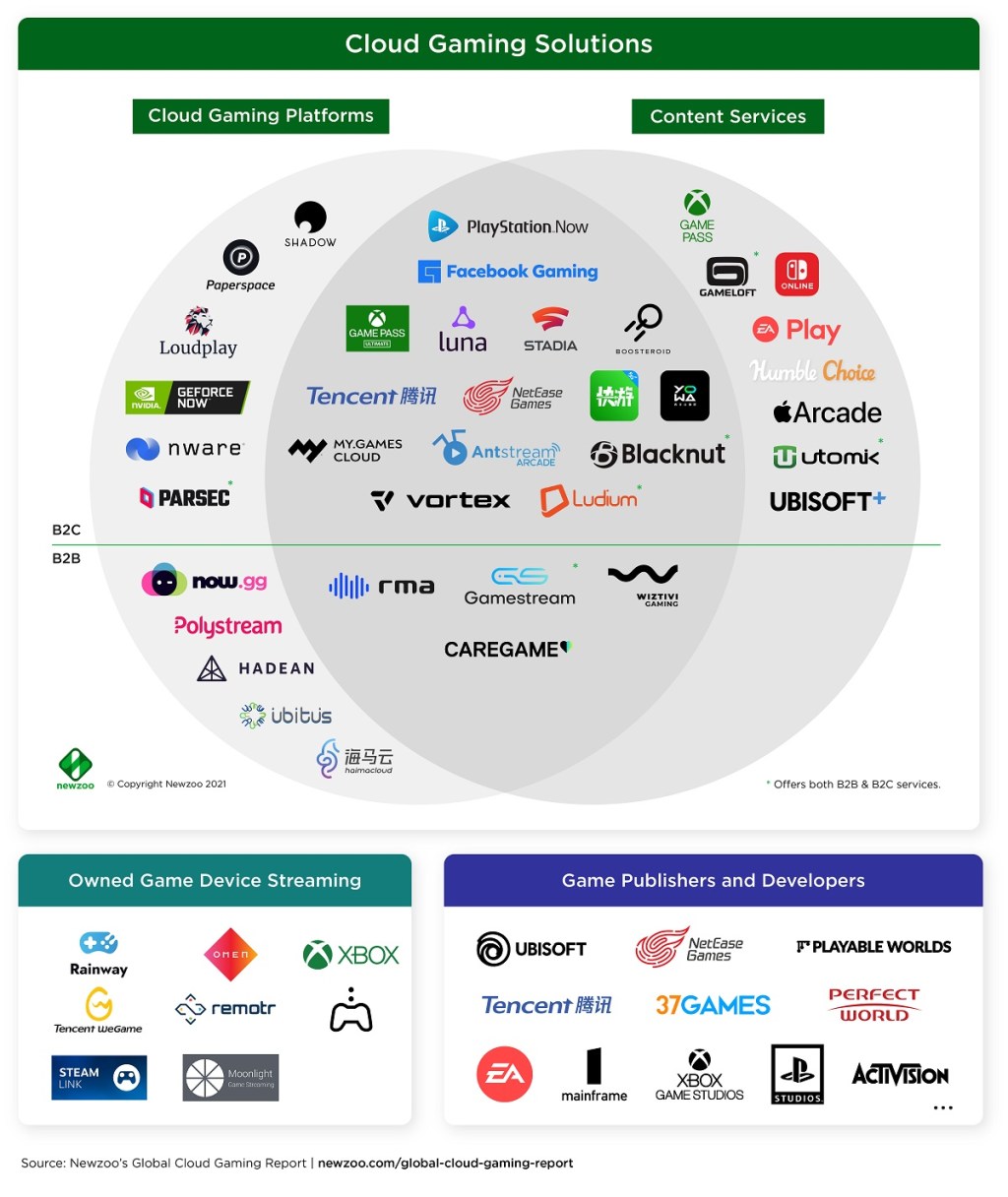 Above: Newzoo’s view of the cloud gaming market.

Throughout the pandemic, cloud gaming has offered an accessible alternative for players to play games — as well as a gateway to gaming for new players, Newzoo said.

At the same time, the global semiconductor shortage has hindered the supply of high-end PC components and new-generation consoles, further emphasizing cloud gaming’s use case of high-end gaming without needing expensive hardware.

On the business side, many cloud gaming service providers have shifted their marketing strategies to deemphasize the technological side of cloud gaming from the main narrative. Instead, these services present themselves as tools that enable gamers to play the latest titles instantly and seamlessly on any device, Newzoo said.

Will the spike continue? 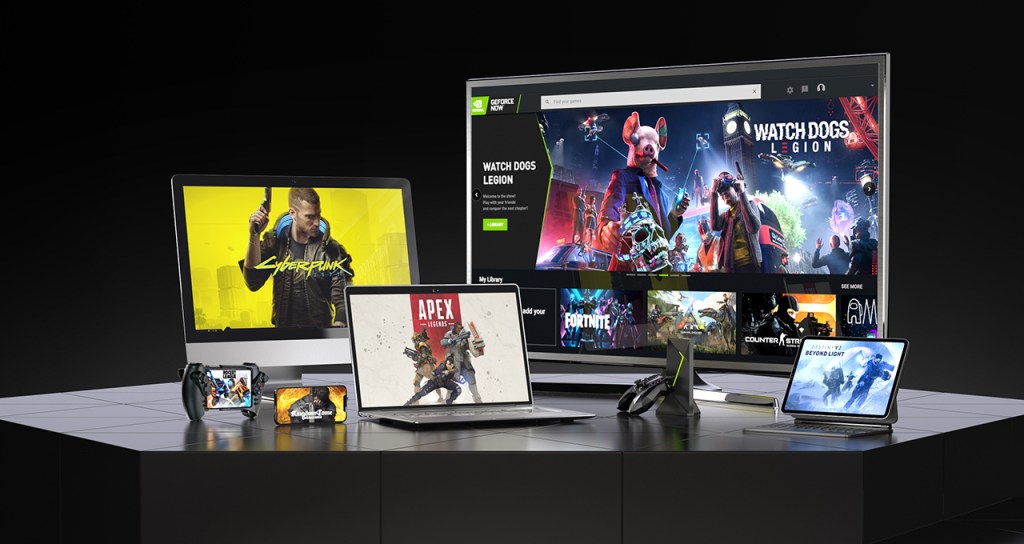 Above: Nvidia’s GeForce Now will now be $10 a month for new subscribers.

Cloud companies had trouble keeping up with demand at first, but now they’re growing again. Newzoo expects that the cloud gaming market will continue to grow healthily, hitting $6.5 billion in global yearly revenues in 2024.

The ability of companies to reach would-be cloud players will determine the success of the market. While services initially targeted a few prominent regions, cloud gaming services are signing new partnerships with internet providers and local communications service providers (CSPs) all around the world every month.

For example, by the end of 2021, Nvidia’s GeForce Now will have reinforced its presence in Latin America and the Middle East while also expanding to Southeast Asia, owing to partnerships with local providers. As far as the total possible reach in 2021, Newzoo believes it is 164.6 million at the end of 2021. That means that if every person who could get it signed up, that’s how many people it would reach.

Those are the people who are aware of what it is, have sufficiently good internet connection, and are potentially interested in paying for a cloud gaming service. Phil Eisler, head of GeForce Now at Nvidia, told Newzoo that 80% of GeForce Now sessions happen on devices that cannot otherwise play games because the hardware is below the minimum spec or incompatible.

Cloud gaming executes games in an internet-connected datacenter and sends video of interactions back and forth to the user’s device, which mere displays the video. So the device itself does not need to execute high-end graphics. With improving 5G service, cloud gaming over mobile connections will be able to reach more consumers in the future.

Of the respondents who have tried cloud gaming, over a third now play games via the cloud for three days or more a week. Another 29% play via the cloud once or twice a week, and 19% once a month. Consumers on the enterprise side, which are service by companies like Parsec, are also using remote work services that are similar to cloud gaming. 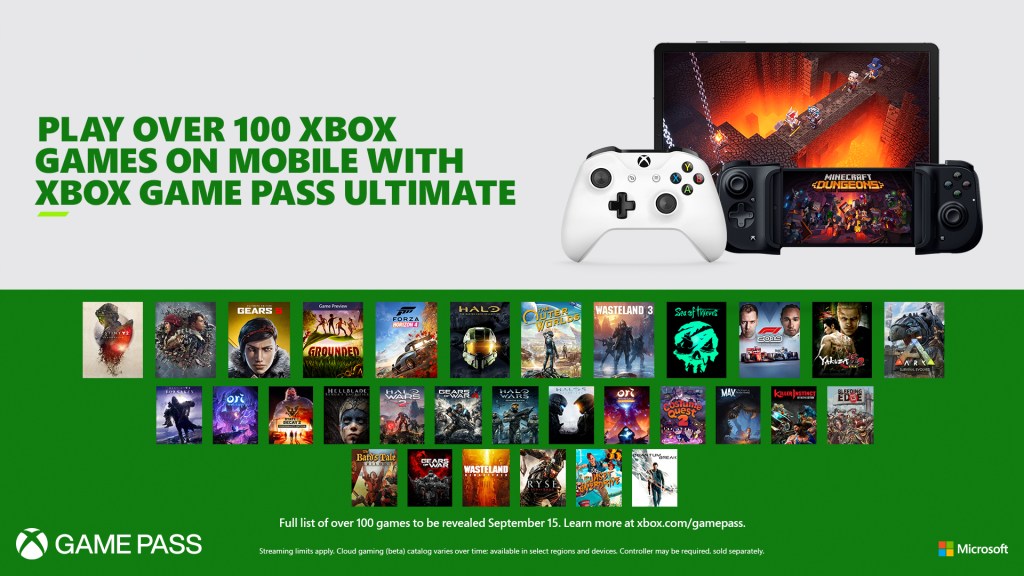 Above: GamePass with xCloud.

“Similar to what we saw happening in the broader games market, COVID-19 helped accelerate the adoption of cloud gaming, by both consumers and enterprises,” Fernandes said. “However, there is more to cloud gaming’s growth than just the temporary effects of the pandemic.”

He noted that new cloud gaming services continue to launch, and existing ones are expanding. Publishers have embraced cloud gaming as an alternative distribution option. Day-one releases on cloud gaming platforms (and future cloud-native titles) represent massive growth opportunities. He also said the tech is getting better and gaming hardware shortages will persist in to 2022.

Fernandes said Newzoo has seen more services focusing on emerging markets such as Latin America, the Middle East, and Southeast Asia. Player awareness of cloud gaming in these regions is actually higher than in Western markets. Likely, players from these growth markets perceive higher potential benefits from using this technology as (gaming) hardware tends to be prohibitively expensive to own. The profiles of those who play included both bargain buyers and ultimate gamers.

He added, “Nevertheless, North America and Western Europe will still dominate the market in 2021, as combined players from these regions are expected to generate more than half of all consumer spending on cloud gaming.”