Gamers spent a lot more time playing games during the pandemic, and game and esports data firm Newzoo is predicting that people will continue to stay engaged with the community and social sides of gaming as the pandemic subsides.

Newzoo is still predicting the game industry will shrink in revenues about 1% to $175 billion for the first time in years in 2021. But the company said the COVID-19 pandemic has accelerated gaming trends already in motion, leading to an expanded gaming audience and through-the-roof engagement for much of the past year.

Will engagement continue after the pandemic?

Newzoo believes people enjoying renewed freedom (and spending more disposable income on non-gaming activities) will spend time away from games, but it also believes that the trend of using games as social spaces is here to stay.

Newzoo’s data also shows a clear connection between age and increased time spend playing games. As you can see in the image below, the younger the age group, the higher the likelihood of playing. 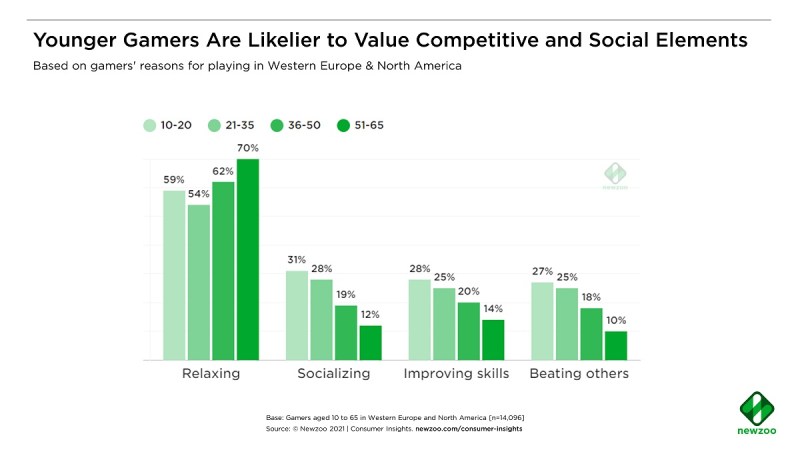 Above: Newzoo says younger gamers like social and competitive games.

Asked why they played, a third of 10-20-year-olds cited socializing as a major reason for playing. The group is also more likely to cite competing and improving skills as major factors. Meanwhile,
older age groups are likelier to value relaxing experiences.

Newzoo noted that watching games also became more popular. By the end of this year, the games live-streaming and esports audiences will hit 728.8 million and 474.0 million, respectively.

But gaming fandom is much more than just playing games, viewing live streams, and owning peripherals. Not only do many gamers play titles and watch their favorite creators live on sites like Twitch and YouTube; many also read, watch, and listen to industry news and developments via websites, apps, and podcasts.

The also actively contribute to discussions on Reddit, Discord, ResetEra, and other communities. And they discuss developments with friends, family, and peers (virtually and in person). This goes even for casual gamers.

In the past six months, 80% of gamers in North America and Western Europe talked about games with peers. Sixty-one percent engaged with gaming communities. And 60% visited gaming  websites/blogs/listened to podcasts. 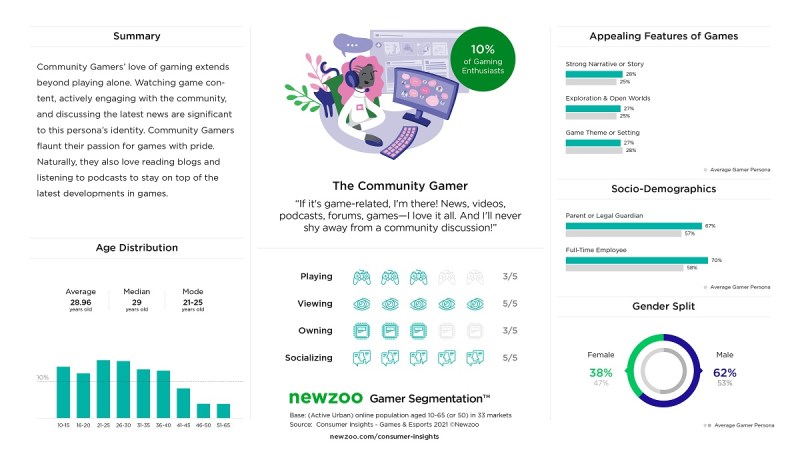 Above: Newzoo’s report on gamer behavior talks about community gamers.

Based on 33 markets, 10% of all game enthusiasts are what Newzoo calls “community gamers,” and social engagement and viewing are more important to this persona than playing. Community gamers also skew male, have an average age of around 29, and are likely to enjoy value non-competitive elements of games more, such as strong narratives and stories, exploration and open worlds, and specific themes.

The unique ways community gamers engage with games also means the ways brands and publishers can reach them are also unique. This uniqueness may be important, as this group drives online conversations by nature, making community gamers inherently influential on the online narrative around games, game-related brand promotions, and more.

This group, and many others, has been engaging with games even more throughout the pandemic, and Newzoo believes that the trend of using games as social spaces will stick. Gaming was always massive, but now it’s even bigger. It’s bigger than movies, and is a true entertainment innovator, Newzoo said. Thanks to the burgeoning metaverse trend, social aspects of games will play an even more vital role going forward, and the community is at the heart of it all, Newzoo concluded.