Five years ago, when Newzoo launched its first global games report, industry revenue was $70 billion. In that five years, the industry grew 56 percent, and in 2016, it topped $100 billion for the first time. Newzoo said, that “illustrates how game companies have not only pioneered new ways of engaging and entertaining consumers, but have also led the way in innovating business models to suit the digital age.”

“The future outlook for games has never been better but requires a new way of looking at the market,” Newzoo added. “Most games now provide consumers with entertainment on three different levels: playing, viewing, and creating. Game companies are quickly evolving into all-round entertainment companies, pushing engagement time up dramatically and securing gaming’s position as the world’s favorite pastime. ”

Newzoo said that games are emerging as the world’s favorite pastime. In fact, the term “gamer” is becoming obsolete, and “game enthusiasts” might be better because it captures the phenomenon of people watching games being played on streaming services such as Twitch, Newzoo said.

“Consumers are spending more time than ever on games, and this is especially true for the millennial generation. The reason for this is that games now cater to a much wider variety of interests,” Newzoo said. “This includes lean-forward (gaming intensely or casually), lean-back (viewing content created by peers or provided by the professional gaming scene), creating unique content and sharing (on-demand and live streaming). Viewing professional or amateur game video content is bringing back millions of lapsed gamers who no longer have the time to play but whose passion is reignited by viewing other players and worldwide championships.” 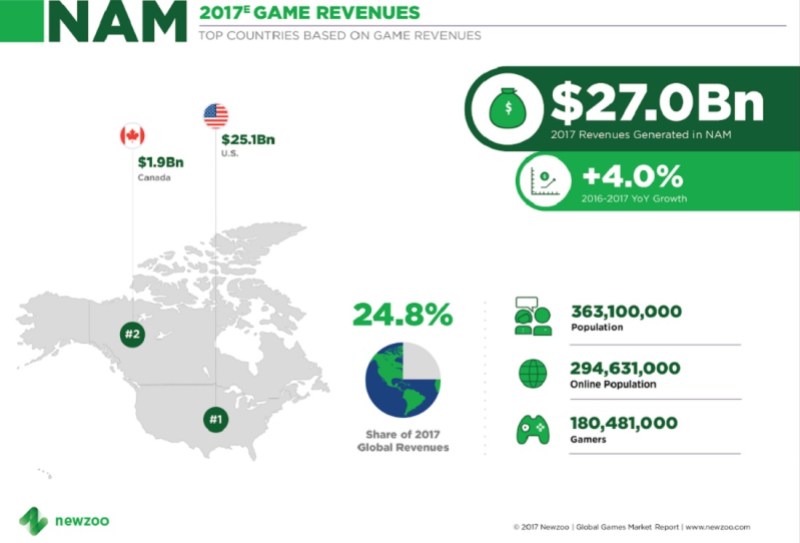 “Game companies are the champions of interactive entertainment and are outstanding at stimulating social, creative, and sharing behavior,” the report said. “They also rely almost entirely on direct consumer spending, as opposed to the advertising-based model of many digital or broadcast media companies. At the same time, the
number of hours spent watching non-interactive (video) content around game franchises has exploded and is no longer seen as free marketing but as a serious new business opportunity.”

By contrast, traditional media are struggling to offer an interactive component around their content. Game companies are quickly learning how to monetize video content and its millions of viewers.

“This could ultimately lead to a media landscape in which game companies hold a key position, as they master both skills,” Newzoo said. “The biggest game companies already entertain a far greater audience than most of world’s biggest traditional media and entertainment companies.”

One of the key drivers of growth is that Chinese gamers are increasingly interested in the top Western PC franchises. Newzoo noted that the last traditional game companies have now acquired digital businesses. Competitive games are the norm, and single-player games are on the way out. And not all legacy franchises will make it through these changes.

In 2017, the Asia-Pacific region will generate $51.2 billion this year, or 47 percent of total global game revenues. This growth represents a 9.2 percent increase from a year ago. North America is the second-largest region, taking a 25 percent share, or $27 billion slice of the market. Europe and the Middle East will hit $26.2 billion, while Latin America will hit $4.4 billion.

Mobile gaming (smartphone and tablet) is the largest segment in 2017, accounting for 42 percent of the total global market. The segment also has the most gamers with 2.1 billion, the majority of whom are gaming on smartphones.

Console is the second-largest segment with revenues of $33.5 billion 2017. PC browser game revenues will decrease by 9.3 percent to $4.5 billion as gamers continue their transition to mobile. Revenues for boxed/downloaded PC games will also drop by 1.3 percent to $24.6 billion.