Mobile game revenue will grow from $38.6 billion in 2016 to $65 billion in 2020, according to market research firm Newzoo. That represents a 66 percent growth rate.

Most of this growth will come from Asia-Pacific and the Middle East and Africa, while the more mature markets of North America and Europe will continue to grow at a lower but stable rate. By comparison, the overall total for global app store revenues will grow from $46.2 billion in 2016 to $85 billion by 2020. As non-game apps catch on, games will fall from 84 percent of total revenues in 2016 to 76 percent in 2020. 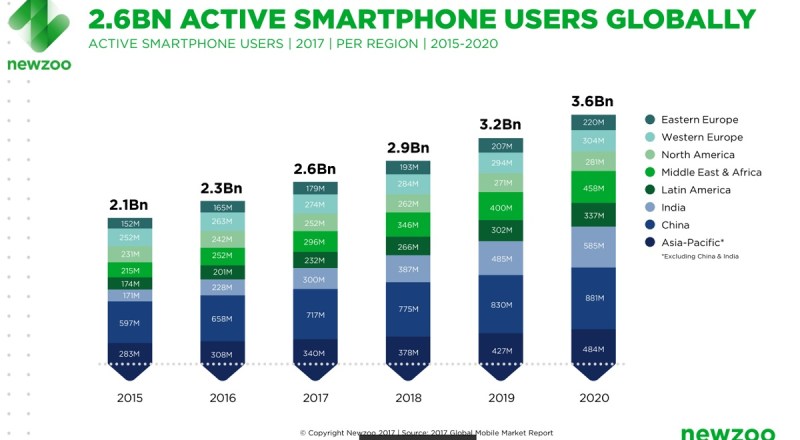 Above: Newzoo’s estimates for smartphone growth.

At the end of 2016, 2.3 billion consumers actively used a smartphone, or 31 percent of the total population. In 2020, this will grow to 3.6 billion smartphone users, close to half of the world’s population.

Samsung is the leading smartphone manufacturer, with 859 million of all smartphones used. Apple ranks second with 704 million smartphones. Together, they are responsible for 56 percent of the world’s used smartphones. 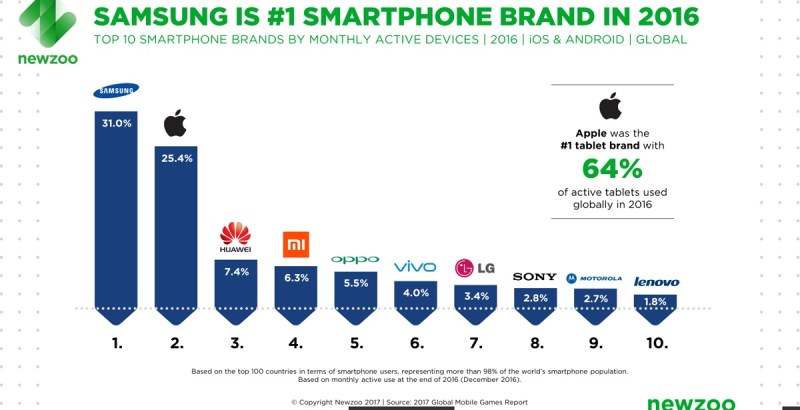 Above: Samsung is the top smartphone brand.

Newzoo also looked at the virtual reality market. It noted that Sony’s PlayStation VR saw almost 1 million devices sold in its first four months on the market. The consumer interest for these devices will remain strong, Newzoo said, but they are unlikely to become mainstream until prices come down, more (non-gaming) content is available, and various practical issues are solved.

Samsung said it sold more than 5 million Gear VR headset for its smartphones, but that amounts to less than 3 percent penetration of a total addressable market of 180 million Samsung devices.

In China, mobile VR has been enthusiastically received. As VR arcades and “experience zones” mushroomed across cities and shopping malls, local manufacturers have been very quick to spot the mobile VR opportunity. Baofeng Mojing reported selling more than 1 million devices priced at around $30 each, and online retailer Alibaba reported sales of more than 300,000 mobile VR devices per month. These
are all manufactured domestically, based on the open-source Google Cardboard specs, by brands like RiTech, VirGlass, Pico VR, Baofeng Mojing, and Deepoon, as well as devices made by smartphone manufacturers, generally retailing for somewhere between $20 and $100.

Newzoo believes that mobile VR will get to mass adoption first, due to quality improvements and lower prices. But most smartphones still aren’t capable of running mobile VR apps.

Global app store revenues are poised for large growth in the coming years. As the number of smartphone users increases from 2.1 billion in 2015 to 3.6 billion in 2020, the potential for apps to monetize their experience on services through different app stores expands accordingly.