The global mobile app market will generate $44.8 billion in gross revenues in 2016, and 82 percent of that comes from mobile games, according to market researcher Newzoo.

The report says there are 3.39 billion mobile users worldwide, with 2.3 billion of those using smartphones. Peter Warman, CEO of Newzoo, said the new report marks the launch of Newzoo Mobile and its Mobile Intelligence Suite, which has been in the works for two years.

The Asia-Pacific app market will account for 56 percent of global app revenues this year, or $25.7 billion, and will grow to $42.9 billion by 2020, a CAGR of 17.4 percent. This is almost identical to the global average but masks important differences between individual countries and sub-regions, with much slower growth in mature markets such as Japan and Korea and faster growth in China and Southeast Asia.

China overtook the U.S. in 2015 in total app revenues and will continue to pull away, benefiting from its sheer size and untapped potential, Newzoo said. The share of revenues claimed by games will remain relatively high in China, as the China mobile gaming market is expected to continue to show strong growth over the next couple of years.

US app revenues will reach $9.4 billion this year and grow to $14.2 billion by 2020. The share of revenues taken by games will lower significantly from 72 percent to 57 percent, partially caused by slowing growth in U.S. gaming revenues. The fastest growing non-gaming categories across all regions include finance, (video) entertainment, lifestyle, and music. 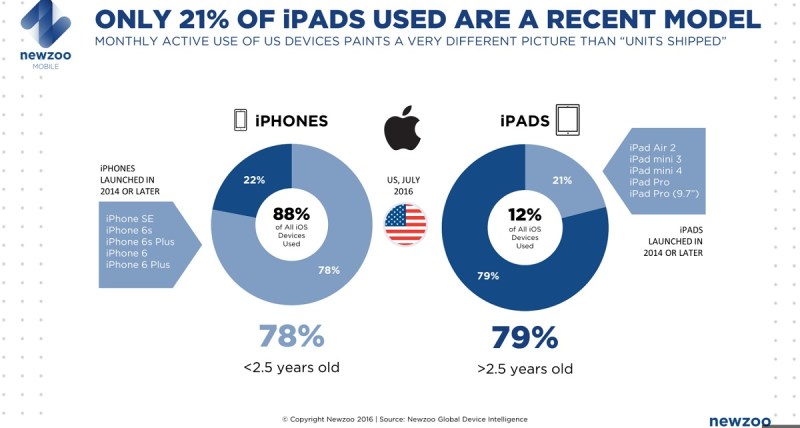 Newzoo’s analysis of July U.S. data shows that more than 79 percent of actively used tablets in the U.S. were models that were launched more than 2.5 years ago.

For iPhones, the opposite is true: 78 percent of actively used iPhones are models that have been in existence for less than 2.5 years. In fact, Apple’s iPhone 6 (Plus) and 6s (Plus) together account for more than 50 percent of all actively used smartphones in the U.S. Evidently, a longer lifetime of iPads lowers demand for new units, but this has no impact on active use of iPads, including spending on app-based services.

Recent reporting on the rapid decline of tablets are based purely on “units shipped” and not on actual use, Newzoo said. 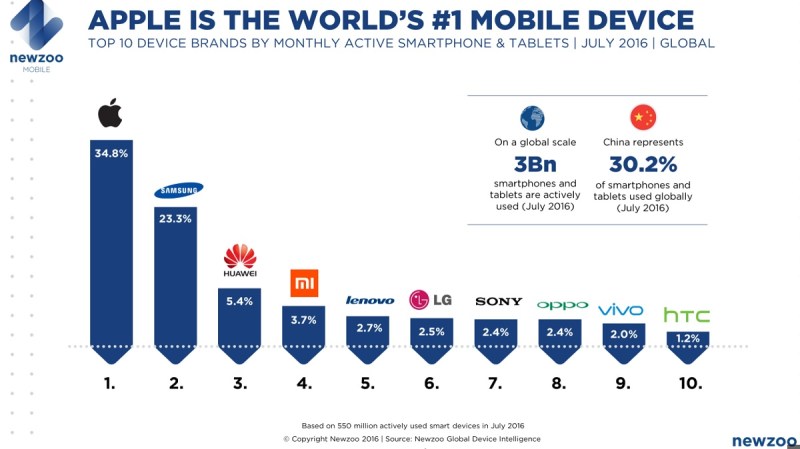 Above: Apple has 34.8 percent market share in actively used smartphones and tablets.

Apple is the global leader with a market share of 34.8 percent in monthly active users. No. 2 is Samsung with 23.2 percent. Chinese brands account for seven of the top ten global brands, testament to sheer size of the Chinese market, which accounts for 30.2 percent of the actively used mobile devices worldwide.

Apple’s strong performance in China in terms of active use plays a crucial role in its leading position. After Samsung are three leading Chinese manufacturers: Huawei, Xiaomi, and Lenovo. The number of Chinese firms in the top ten is testament to sheer size of the Chinese mobile market: 30.2 percent of the world’s active smartphones and tablets.

On a regional level, Apple is the smart device brand with the most active users in North America, Middle East and Africa, as well as Asia-Pacific, while Samsung has a clear lead in Latin America and Europe. In fact, Samsung has an impressive 48.4 percent market share in Latin America, with Apple and Motorola trailing behind with 19.9 percent and 18.1 percent, respectively. 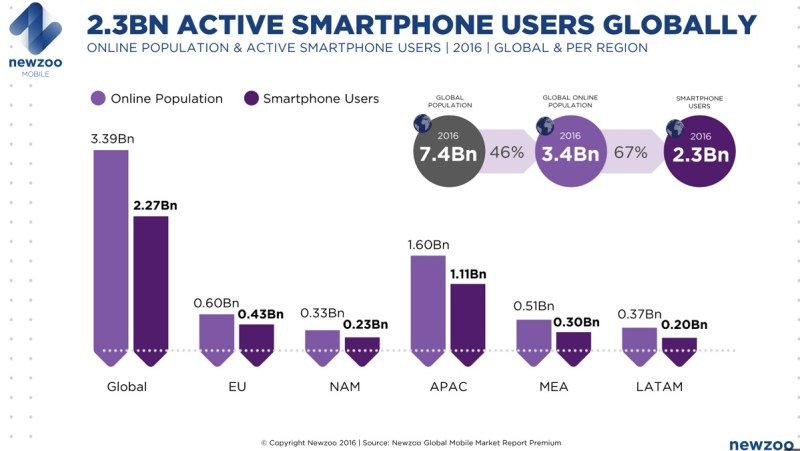 Above: Newzoo says there are 2.3 billion active mobile smartphone users.

This year, 2.3 billion people across the globe, or 31 percent of the world’s population, will use a smartphone, Newzoo said. The data is derived from Newzoo’s device and usage models that comes from 150 individual countries.

Using demographic and audience profiling data, the report shows that Amazon users are the most likely to have a full-time job and to be big spenders on digital media, including games and subscriptions like Spotify. Amazon also scores well in terms of spending, illustrated by an average revenue per paying user (ARPPU) of $23.40, higher than the average across all Android smartphones and tablets.