The top 25 public companies by game revenues generated a combined $94.1 billion in 2017, an increase of 29 percent compared to 2016, according to data collected by market researcher Newzoo.

The numbers showcase the ongoing consolidation of the industry, as growth for the top companies once again outpaced the total games market, which grew 14.3 percent from a year earlier. Together, these top 25 companies captured 77 percent of the $121.7 billion global games market in 2017.

China’s Tencent once again earned $18.1 billion in revenues, or 15 percent of the total global market, and was the No. 1 gaming company in the world for the fifth year running.

It is followed by platform owners Sony, Apple, Microsoft, and game publisher Activision Blizzard, respectively. That means the top five gaming companies were unchanged from 2016. 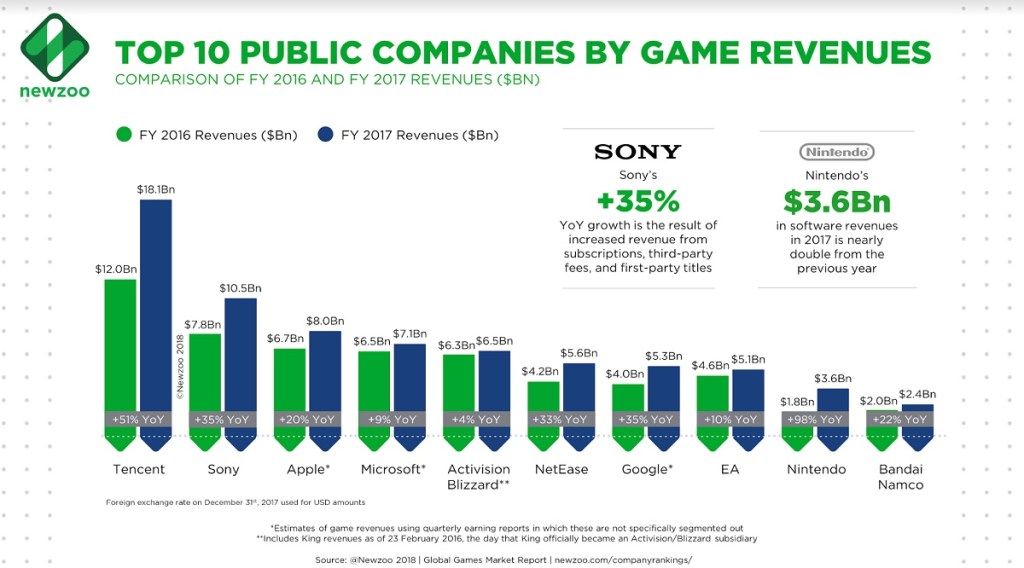 Contrary to last year, when most growth was consolidated in the top 10 companies, the top 11 to 25 companies in 2017 grew 24 percent year on year, keeping pace with the market leaders.

Japanese mobile gamers spend the most per payer globally and this is not lost on Japanese companies. Traditional publishers such as Bandai Namco, Konami, Sega, and Square Enix, now earn more through mobile games than console.

Konami, well-known for its popular console franchises such as Metal Gear and Silent Hill, now earns more than four times as much on mobile than it does on console with titles such as Yu-Gi-Oh! Duel Links.

South Korea’s NCSoft was the fastest riser of the top 25 companies with a year-on-year revenue jump of 104 percent. This increase can be largely attributed to the success of Lineage M, a mobile adaptation of the long-running PC MMO Lineage.

Newzoo said it is interesting to note that companies with a truly mixed portfolio, defined as companies that earn at least 15 percent of their revenues through each segment (PC, console, and mobile), showed less growth than companies focused on either one or two segments.

Tencent dominated the Chinese market by its grip on both PC and mobile social platforms. This dominant position, combined with smart, diverse investments, has kept Tencent at the top of the gaming industry for the past five years.

The advantage of owning the distribution platform is abundantly clear in the mobile games space. Both Apple and Google had a record-breaking 2017 in terms of game revenues, earning $8.0 billion and $5.3 billion, respectively. Apple is now the third-largest gaming company in the world.

Sony, Microsoft, and Nintendo continued to outperform the global console market, earning an increasing share of revenues through third-party sales in their online stores. In fact, the three companies accounted for 57 percent of all console revenues in 2017. (Other game publishers accounted for the rest of console revenues.) Switch sales, and the resulting revenues from its first-party titles, drove Nintendo’s revenues up by 98 percent year on year.

Netmarble’s full-year revenues increased by 82 percent year on year to $2.3 billion, driven by the worldwide success of the mobile massively multiplayer role-playing game Lineage 2: Revolution. The global success of the game has made Netmarble less dependent on its domestic market, as 54 percent of its revenues come from outside of Korea.

NCSoft, which owns the Lineage IP, saw its revenues surge 104 percent to $1.5 billion, driven by the immensely popular mobile adaption of Lineage M. Mobile accounted for 57 percent of its total revenues, compared to none in 2016.

Disney, whose revenues dropped 4 percent to $870 million, was the only company in the top 25 to record lower results than 2016. After discontinuing its last proprietary gaming IP in 2017, Infinity, its game revenues are now purely based on licensing.

Notable omissions from the top 25 compared to 2016 are GungHo Entertainment and Facebook. GungHo Entertainments’ revenues declined 15 percent as fewer gamers were playing its main title, Puzzles & Dragons. Facebook’s gaming-related revenues declined 6 percent as gamers continued to move away from browser-based gaming. Facebook has shifted its efforts in the gaming industry to target hyper-casual gamers through its Instant Games platform.

New in the top 25 are Perfect World at No. 23 and 37 Interactive at No. 25. Both companies are mobile-first Chinese publishers that benefit from the massive size of the Chinese mobile gaming market.