Skins (cosmetic add-ons that customize the look of game characters) have become a staple of modern video games like Fortnite, and 85% of U.S. gamers ages 13 to 45 are aware of them.

That’s one result of a survey of U.S. players by market researcher Newzoo and gaming monetization firm DMarket. Skins (and battle passes) are the main reason that Epic Games’ Fortnite makes more than a billion dollars a year in revenue, and they have become a key monetization element in free-to-play games. DMarket, which has a platform for trading skins, estimates the skin market is $40 billion a year.

Newzoo’s report also said that 81% of those aware of in-game cosmetics want to trade skins for real-world money. And 75% of players who are interested in skin trading say they would spend more on them if they had a monetary value outside of the game. Permitting players to sell skins outside of a game is a key monetization decision for game companies today.

Young male players are more likely to engage with cosmetics in games. And 43% of players claim they use skins to change the appearance of their avatars/characters, weapons, and vehicles.

Newzoo estimates the world has 2.7 billion gamers, a number that it expects to surpass 3 billion in the next three years. Game-related engagement is higher than ever and the way gamers engage is changing, Newzoo said. Gaming’s trajectory over the past two decades has also given rise to live-service games, which are often free-to-play and are typically monetized via skins for in-game avatars. 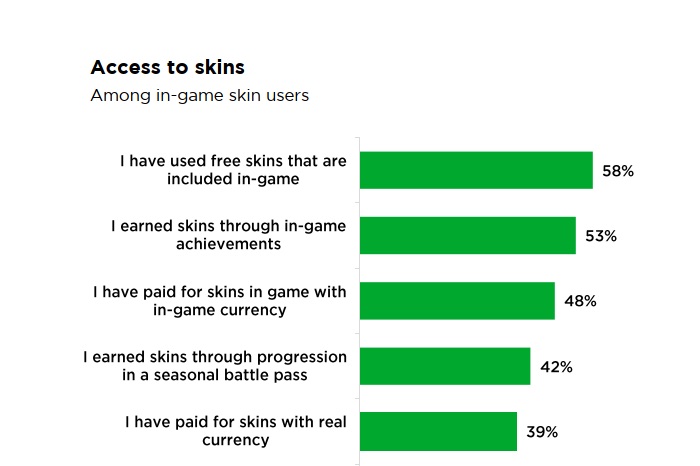 Above: Stats on skins

The most popular games, including Fortnite, Roblox, League of Legends, and Call of Duty, feature skins prominently. Big spenders (called “whales”) spend, on average, more than $15 a month on skins. The whales tend to skew older. Almost 80% of Fortnite’s recent players engage with its cosmetics in some way.

DMarket CEO Vlad Panchenko said in an email to GamesBeat that gamers are accustomed to in-game currency and spending virtual money in games.

“You do not need to explain to gamers what virtual money is and the value of it,” he said. “They are aware of that. And it’s one of the reasons why they were among the first to adopt cryptocurrency.”

DMarket itself has more than 700,000 users who are using cryptocurrency to trade in-game assets. On top of that, if the item they are buying is a cryptocurrency-based skin, they are willing to pay around 20% more for it than for a regular one, Panchenko said.

Yet the majority of cryptocurrency-based skins are more tradable among crypto traders, not gamers. That means that sometimes the trading is happening based on speculation that the value of the item will go up, he said.

Panchenko thinks that “loot boxes,” where gamers buy a mystery box and the item purchased isn’t known ahead of time, have been harmful to customers and they will eventually be done away with due to regulatory concerns that they amount to illegal gambling.

Panchenko said gamers prefer to buy from wherever it is more user friendly and cheaper. Buying from a publisher or a third party requires a factor of trust, but once the user has that trust, then it doesn’t matter if it’s a game company or a third party.