South Korean publisher Nexon has been making a concerted effort to expand its reach in the West. It’s formed a number of key partnerships of late, the most recent of which is to publish the unannounced project from Dallas Dickinson, formerly of BioWare Austin.

This online action game is the first project from the newly formed studio, QC Games. The staff includes a number of industry veterans from studios across the gaming landscape, such as NCSoft, Harmonix, and Maxis. None of the people who have formed this studio are household names, but their games certainly are. Star Wars: The Old Republic, Rock Band, The Sims, and Doom 3 are all represented here, which hints that this studio may be worth taking seriously. 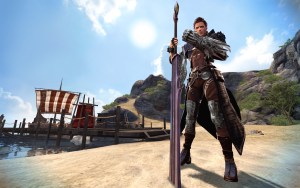 What’s most fascinating is that Nexon is continuing to gain ground outside of its own territory. The publisher formed Nexon America exactly to fund Western projects, and it has been making serious headway in that area. Its most notable partnership is with Cliff Bleszinski, the mastermind behind Gears of War. His studio, Boss Key Productions, is creating LawBreakers, a free-to-play, first-person shooter that debuted last week at PAX Prime. Nexon has also formed a partnership with Sleeping Dogs’ developer United Front Games (untitled free-to-play game) and Batman: Arkham Origins’ developer Splash Damage (Dirty Bomb).

Nexon’s expansion could be a good thing for people across the globe. LawBreakers is its most touted partnership, but a less-heralded one may prove to be even more important. The South Korean publisher is set to release Titanfall for the PC in Asian countries. The most glaring problem with the PC version of Titanfall is its small player base. By expanding to more territories — especially on a continent rich with PC gamers — people who stuck with the online shooter for the last couples years may finally have an ample community to compete with.

That worldwide audience could be a key part of QC Games’ fate as well. Nexon is publishing and marketing that studio’s first game worldwide. That means a much bigger potential audience and, considering it’s an online-centered game, that could spell the difference between success and failure.

Nexon’s push to expand its reach could have a sizable impact on the gaming landscape. South Korea has a huge community of online players, with more than half its population regularly spending their free time in digital pastures. We could see a spike in gaming communities if Nexon continues to release games across the globe.