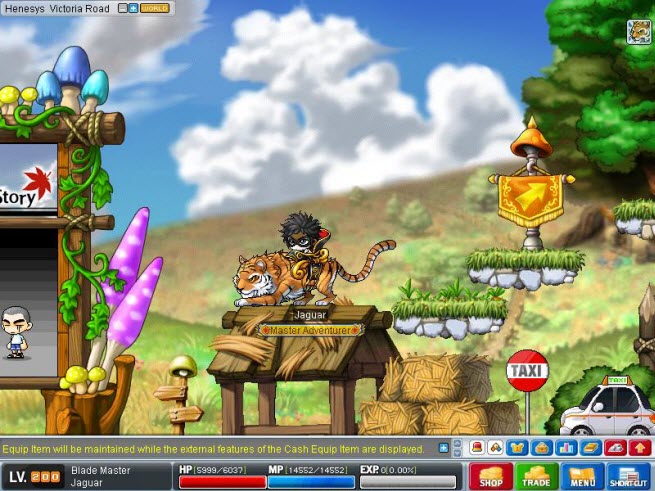 Owen Mahoney was bored at the Electronic Entertainment Expo (E3) this year. As the chief financial officer of Nexon, he is immersed in digital gaming — social, mobile, and online — that is much more popular in Asia. More than a decade ago, Nexon pioneered free-to-play downloadable online games in Korea. But there was very little mention of new business models and new ways to play games at E3, from Mahoney’s point of view.

Mahoney helped steer Nexon through an initial public offering that raised $1.2 billion in 2011. His company has doubled down on the massively multiplayer online game market with a majority investment in NCsoft. And it is figuring out how to spread its success in digital games through the rest of the world.

We sat down with Mahoney this week. Here’s an edited transcript of our interview.

GamesBeat: What did you think of E3? 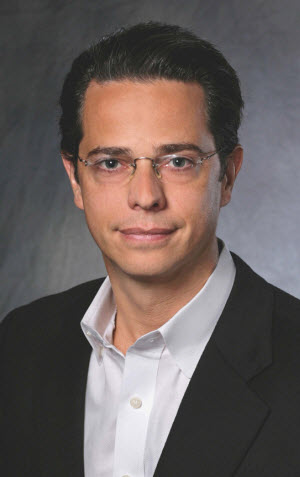 Owen Mahoney: I found less than I hoped that was really interesting. The whole discussion of $399 versus $499 for the consoles is sort of a non-issue. People are making a lot of noise about it, but it doesn’t seem very important to the future of the industry. Whatever mistakes or tactical errors that someone makes — if they are mistakes at all, especially on a pricing decision like that — they can always reverse them later.

What matters to me is, are there a lot of fun games to be played on these new platforms? What do the new platforms provide? I saw very little that I was excited about as a consumer. It felt a lot like it did 10 years ago. We were pushing more pixels as an industry. I don’t find that particularly interesting. When I think about the games that I’m playing and that my kids are playing, it has nothing to do with all that stuff. I see more and more people playing Minecraft on their laptops sitting in front of a turned-off 60” plasma display with a console attached to it. They’re sitting there playing an online role-playing game instead, or a mobile game. I’m not sure everyone’s clued into that. When I think about the convergence that’s happening in platforms right now, I think everything’s going to get turned upside down within a couple of years.

I remember at this point in the last console cycle, there was a lot to talk about from a technology perspective. It wasn’t all about pricing. It was about much more interesting stuff.

GamesBeat: We haven’t seen much about digital gaming from the big folks. Microsoft is defending its used-game policy, but they’re not talking about putting up a whole library of games for you to access, or somehow making use of digital in a way that’s new.

Mahoney: Yeah. [Sony’s] Gaikai and OnLive weren’t a discussion topic this year. We have this perspective at my company, which is informed by the world we live in, which we continue to believe is the future of North America. I don’t envy my former colleagues at EA trying to figure out how to get the consumer to spend $60 on a piece of entertainment software. That’s a hard job. You’re going to be in for tens of millions of dollars.

While all this noise is happening and all these billboards are all over and there’s all this TV advertising, there’s a few companies around the world that are very quietly picking up all the dollar bills lying around the industry.

Did you ever see the movie Moneyball? You remember the scene when all the scouts are spitting and chewing and talking about what they think of various players? Then there are two guys there, Billy Beane and his numbers guy, saying, “No, these are the stats you need to worry about.” It feels like one of those things where there’s a real disconnect in the industry between what matters for consumer fun, what matters for profitability and growth, and then what everybody’s talking about.

Again, I have these conversations sometimes and people say, “My God, I had no idea about your company’s growth and profitability.” Once again, last year we grew 25 percent year-on-year — more than $1 billion U.S. Our operating margin was more than 46 percent. When I was at EA, you couldn’t dream of 46 percent in the thick of a console cycle, much less at the transition. We’re not the only ones. Look at Tencent’s business. Lots of companies in Asia have our model. I’m not talking about casual games that explode and then go away. We’re talking about games that are consistently huge earners. It’s because of online connected synchronous multiplayer and free-to-play.

Another interesting stat comes from NCsoft, the Korean game company. We’re the biggest shareholder there now. Their game Lineage, which came out in 1996 I believe, just hit a new peak in the last month and a half. It’s still growing. That tells you a lot. Even Activision can’t imagine a game that old that’s still growing. 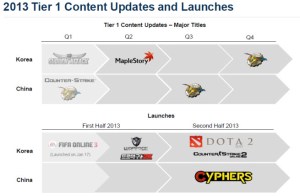 GamesBeat: It’s always surprising to me how many games are out there in Asia that westerners know nothing about. Puzzle & Dragons is just now finding some awareness here. Same with CrossFire.

Mahoney: CrossFire’s the number one game in China, or number two at least. Dungeon Fighter, our game, which is also up there, nobody’s heard of it here. It’s interesting. Again, what are we all in business for? We’re in it to make money by delivering fun stuff. It’s a great business. But you have to do both of those things. One defines the other. We want big audiences and to be profitable and grow. Everybody in this room would like that for their company, and a few companies around the world are doing it. Somehow, though, that’s not what we’re talking about as an industry here.

GamesBeat: How do you guys take your success and use it to expand in the west?

Mahoney: We think there’s a huge opportunity that we’re pursuing, certainly over the course of the year through the next E3. We’re taking what we know about free-to-play — which is very hard to do, and very misunderstood in the west — and combining it with great IP, great physics, great graphics, and gameplay that’s popular in the west. We already have some experience of doing this and partnering this way in the east, and we’d like to make those same combinations here.

For example, we have a very close relationship with Valve, which we think is one of the best, if not the best, western developers. We had a viewpoint several years ago as to how to makes Counter-Strike into a free-to-play game. We created Counter-Strike Online. They essentially allowed us to use the assets – the technology, the art – and make a free-to-play game out of it. It worked beautifully. It’s one of our biggest games in Korea and Japan.

We’ve picked up the FIFA Online relationship with Electronic Arts. That game originally was created with another company in Korea, where EA provided the FIFA engine while their other partner provided the front-end and handled free-to-play. The lead developer in that company was actually a former Nexon employee who’s come back to us. He started a company that we’re an investor in. It worked beautifully. Now Nexon is the publisher of that game in Korea. We want to do more of that and do it here as well. There’s a lot of great IP in the west.

The challenge for us is, great developers like Valve and EA and Crytek and so on, with their physics engines and graphics engines and so on, they’ve spent a lot of time and effort and money to develop these great games. That’s a great strength. It beats a lot of what you see in Asia. It’s not that Asia has bad graphics, but they’ve got things that work well in the west, that are very advanced. What we have is the knowledge of free-to-play.

There’s a massive misunderstanding of what free-to-play is. You play a lot of free-to-play games, especially the casual type on Facebook, they’re not free-to-play at all. They’re pay-to-play in the guise of free-to-play. What we’ve learned from experience from more than a decade ago is that if you make it impossible to progress in a game without paying, it’s not a free-to-play game at all. You alienate your users and you lose them over time. You have no longevity in the end. We have 10-year-old games that continue to grow.