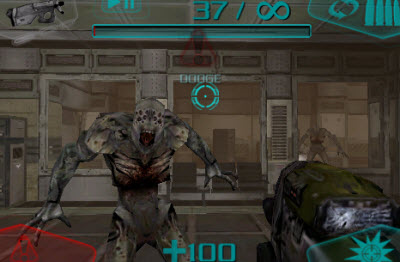 One of the true next-generation games on the iPhone debuts next week. Doom Resurrection from id Software will be available in the AppStore to give gamers what they’ve been waiting for: much better 3-D graphics than most first-generation iPhone games.

It’s the pet project of id Software’s technical guru, John Carmack, who led a team of six people at Escalation Studios to get the game done over the past six months. Carmack’s endorsement means Apple has one of the leading game developers in the whole industry on its side.

“I love the iPhone,” Carmack said in an interview. “It’s a real game platform, not a tiny little toy.”

The first round of iPhone games have been phenomenal in many ways. They’ve driven the excitement about the iPhone as a true gaming platform. On the 40 million iPhone and iPod Touches sold, games are the No. 1 application, accounting for more than 10,000 of the 50,000 iPhone apps created to date. Many of the games are cool, particularly for casual gamers who have some time to kill. But I’ve been waiting for hardcore games to play seriously, not just as a diversion. And Doom Resurrection offers exactly that.

Carmack said the project wasn’t easy. He hit a road block and had to go back and redo the core shooting/aiming mechanic of the game. But he said the team was able to take much of the textures — core art work — of the PC game Doom 3 and use it for the iPhone game. He said he was pleasantly surprised that the team didn’t have to completely redo the PC game art for the iPhone. The art is “downsampled” to fit in the iPhone screen. He played a few tricks with the graphics in order to make sure everything ran smoothly.

The game has eight full levels and about five hours of game play. The team expects to be able to use various iPhone software 3.0 features once they are released, but Carmack said the game was built to run fine on the current iPhone operating system. The game runs at 30 frames per second on the latest iPod Touch, and perhaps half that speed on the earliest iPhone handsets.

“If you look at it in raw hardware horsepower, the iPhone should be better in performance than the Nintendo DS and the PlayStation Portable,” Carmack said. “But the truth is, you can’t exploit it all because of software inefficiencies.”

The plot of the game is similar to that of Doom 3, but it takes place in a different part of the space station than the Doom 3 story. You are the sole Marine survivor on a remote research facility on Mars where all hell has broken loose in the form of demons from hell. Hence, it’s a completely original game in that sense. Players can talk with scientist characters in the game. And they can use all of the same weapons and fight the same monsters as in Doom 3.

Carmack said he is meeting with Apple to offer advice about how to improve the iPhone as a game platform. He is happy with the faster iPhone 3G S that Apple announced Monday, but he said he’s also focused on making sure that his games run on the widest number of iPhones.

So far, Carmack said he is watching how demand unfolds for other smart phones such as the Palm Pre, but for now he is only focused on making games on the iPhone (as well as id Software’s traditional game platforms such as the consoles and the PC). It would be more convenient, Carmack joked, if the iPhone crushed everyone else.

Carmack said the game has features that could be unlocked later with the release of iPhone 3.0 software. That includes peer-to-peer cooperative multiplayer, where gamers can connect with each other and play in the same multiplayer game, said Tom Mustaine, managing director of Escalation Studios.

[Are you an entrepreneur or executive active in mobile? Join us at MobileBeat 2009, our mobile conference for industry leaders. Sign up by today (we’ve extended the earlybird), and save $145.]