Star Wars fans are going to want to pay attention to the next mobile game, even if they typically stick their noses up at free-to-play stuff.

Star Wars: Uprising is an action-role playing game from developer Kabam that lets players make their own characters and go on missions to earn loot alone or with friends. However, the real exciting part is that Uprising takes place after Return of the Jedi and before the new movie, The Force Awakens. This makes it the first Star Wars game set after the death of Darth Vader and the Emperor since Disney reset the canon (sorry, Dark Forces fans).

And this also means we now have our first idea of what happened in the Star Wars galaxy after the movies.

Uprising is set in the Anoat Sector, the area of the galaxy that contains familiar planets like Hoth and Bespin. After the Emperor’s death, the region’s Imperial governor closed off the sector from the rest of the galaxy with a blockade, shutting out the Rebellion and destroying anyone who tried to spread word of the Emperor’s death. Now, local smugglers, bounty hunters, and concerned citizens (including you) are fighting to find out the truth.

GamesBeat talked to Daniel Erickson, who was the creative director of the role-playing game Star Wars: The Old Republic over at BioWare. He talked to us about the new game and working with Lucasfilm to help establish Star Wars’ new canon. 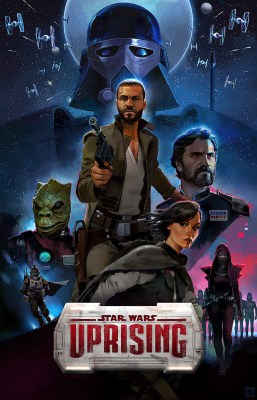 Above: Uprising even gets its own Star Wars-style poster.

GamesBeat: You must be in an interesting position. You’re talking with Disney and Lucasfilm, obviously, and getting some information about what should be happening in this post-Return of the Jedi world that no one’s really heard before.

Erickson: It is in fact the most carefully orchestrated and beautifully done multi-discipline thing I’ve ever seen. I’ve done everything from getting to sit down and look at different books to being taken to fully white rooms with no details in them, given a single piece of paper that I’m only allowed to read and not take notes under guard, and then marched out again. It’s unlike the old Extended Universe [now called “Star Wars: Legends” and all non-canon], which tended to get a little out-there — it had a lot of different people putting things in. Before Knights of the Old Republic, you had to almost put it together like old religious scripts and try to find the truth of things.

They had a central story team at Lucasfilm that is very, very carefully laying out everything that’s happening in this space. We get these interesting, strange pieces where we try to do something, and someone will say, uh, you actually can’t do that because of things I can’t tell you about. Or things where, hey, what you’re doing here is actually kind of interesting and looks a little bit like what these other three people are doing in different places. Let’s get this all together and make it the same thing. Let’s connect these dots. You have a really interesting character that you’ve put together here. Let’s make sure we know how this would look in these other properties. So fans are going to find a lot of threads, not just between Uprising, but between all of the things that are being pulled out from Lucasfilm right now.

GamesBeat: You said this is in a sort of quarantined sector. Should we not expect to see any famous characters?

Erickson: The interesting thing about that is, there are sort of pluses and minuses to it. You will definitely see particular people make appearances. They are not the stars of this thing. The most controlled storylines are obviously what’s going to happen to that small handful of people. We know what’s going to happen to them, so we can include some of that stuff, but we are not trying to tell that story.

GamesBeat: I do have to ask specifically about Lando, though. You have Bespin in there. Cloud City is floating around there.

Erickson: Yes, yes, yes. That’s part of the excitement, to get in there. Obviously, it’s Bespin that is most closely — we have to really dig in there and say, OK, let’s build a timeline. The Emperor is killed. There’s a celebration in Cloud City because the Imperial garrison pulls out. What happens next? Those are all fun things to work with.

GamesBeat: Is this going to be a free-to-play game?

Erickson: This is a free-to-play game, yes. Kabam RPG is dedicated to doing what we call “white hat free-to-play.” We come at it very much from a “there are no pay gates” angle. There is never something that doesn’t drop in the world. There is never any time you would have to pay. Our players pay because they are incredibly involved, because they are paying against the grind. They say, hey, I’d rather take a roll of this for premium currency than I would to hunt down that boss and hope I get the drop. The first game we did was Spirit Lords. There were things in there that still smelled to our players of free-to-play games, where they had bad experiences. We did work on the stamina system. We’ve removed anything you see — as a walk-in, first impression — that looks like free-to-play done in a way that people have not liked in the RPG space.

GamesBeat: What kind of things would people be buying?

Erickson: We still have a system where you can go to the supply guy and get random rolls for loot and gear. But all that loot and gear also drops out in the world. Through the sector battle system you can go in and — you basically run scouting missions to get battle plans, and you use those to do really high-powered missions and get the most victory points. You can pay directly for that if you want. If you don’t want to do the work to get the battle plans, you can directly pay through with the premium currency and just do you battle plans. Everything is either about maximizing what you’re doing at the moment or saving yourself time in the aggregate.