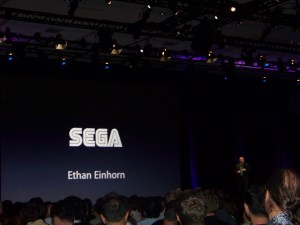 Apple’s first guest on stage today at the WWDC conference is Ethan Einhorn from Sega to talk about an iPhone game: Super Monkey Ball. He says Sega created four stages from scratch in a few weeks. Now it’s cleared through 110 stages.

The game uses the iPhone as a kind of slate with tilt control. You move the iPhone horizontally, up and down, to control a rolling ball. You knock things down and roll the ball into holes etc. It takes advantage of the phone’s accelerometer, which measures which way the iPhone is facing. It will be available through Apple’s upcoming App Store for the iPhone for $9.99. It’s just like a the old console versions of the game. Tilt!

Other new apps being added: eBay, Typepad blogging, Loopt friend locating, Associated Press news reports (native for the iPhone). Another game from Pangea Software is Enigmo, a physics based game that uses the touch feature on the iPhone. You can use it to scroll and move things around through 50 different levels. The game is able to show thousands of little balls flowing around, making full use of the iPhone’s CPU. Cro Mag Rally is the second game, a 3-D rally racing game. Both games will cost $9.99 each at the App Store. 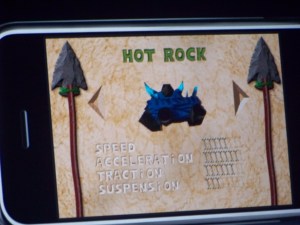