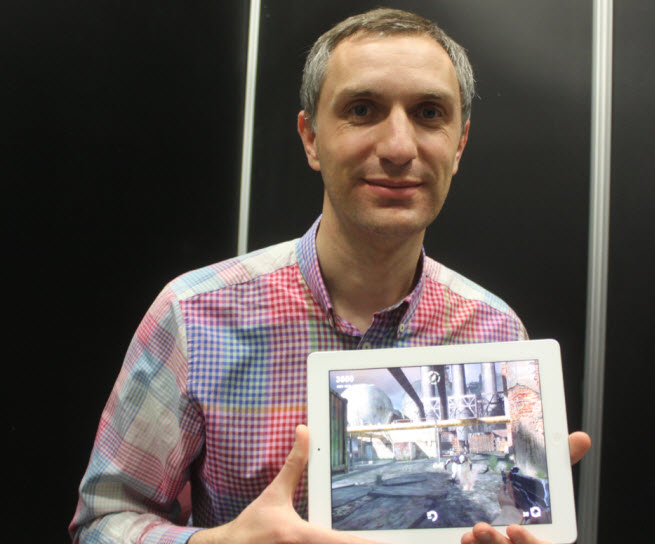 Ben Cousins made the move from AAA console games to mobile entertainment. But he refused to leave first-person shooters behind, even though it’s exceedingly hard to make a shooter that can be controlled with a touchscreen on a smartphone or tablet. But at DeNA’s Scattered Entertainment studio in Stockholm, Cousins’ team of former Battlefield game developers has done just that  with a title that they call The Drowning.

The Drowning uses some unique controls that make it simpler to play a shooter game on a tablet. You tap on the screen with two fingers, and that lets you fire a bullet at the mid-point between your fingers. You tap with one finger to move to a location on the screen. And you swipe to turn your head. That simplifies the way you shoot a bunch of zombies at the same time. After more than a year of development, The Drowning is nearing its launch date.

We caught up with Cousins at the recent Game Developers Conference in San Francisco, where he gave a talk on The Drowning and showed us how the game monetizes through its random scavenger reward system. The game is looking quite polished, and it has been tailored to mobile devices in a clever way. Here’s our edited transcript of our interview with Cousins, which included an in-depth demo. And be sure to check out the video at the end. 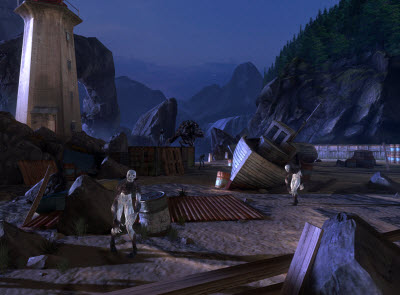 GamesBeat: Is there anything in particular you learned  from making this game?

Ben Cousins: A lot of the decisions were made before I even had a team in place. It goes through my journey of deciding what type of game I should work on. Should I work on PC? Should I work on mobile? What sort of game should I create? What sort of audience should I target? My bible for all these decisions was Clayton Christensen’s The Innovator’s Dilemma, which is something I always talk about. I think he’s a genius. This concept of disruptive innovation is important at the moment in the games industry.

What we’re seeing happen is what happened hundreds of times in other industries. It’s been codified and analyzed and proven by Christensen. People who followed his writings are going to be successful in the current games industry and the tech industry as a whole. Steve Jobs was a big fan. Apple’s trajectory since 1997 is very much informed by The Innovator’s Dilemma.

The talk is about The Drowning and The Innovator’s Dilemma and how that book influenced a lot of my high-level decisions. It’s not really about the development of the game, but it’s about those decisions. I want to show the game as well. I’m proud of it.

Cousins: Yeah. I go into this in my talk. We decided to play to the strengths of the platform. Rather than try to create a direct competitor with a Call of Duty or a Halo, we decided to create a shooter you can play in the moments when there isn’t an Xbox around. We think we’ll be able to compete with them in the future, but at the moment, the two-minute game rounds, the inventory management, the simpler story, the 2D cutscenes, all of those elements try to play to the strengths of the platform. We’re creating a game you can play when you’re waiting for a meeting or when you’re on the train or when your kids have capsized the TV.

We’re very influenced by other mobile games. Some of the biggest influences here, as I mentioned, are games like Angry Birds or Bejeweled Blitz, or the DeNA mobile games like Blood Brothers and Kaito Royale.

GamesBeat: You know Puzzle & Dragons? I’ve been thinking over why it’s so addictive. It’s got that Bejeweled gameplay in it.

Cousins: Puzzle & Dragons actually has one of the same mechanics as our game, which is you’re spinning a gacha to collect sets of things. Kenji Kobayashi, who’s one of the top guys at DeNA in Japan,  played our game and said, “Ah, it’s a bit like Puzzle & Dragons.” It’s a really addictive game. You have fun gameplay in the puzzle element, but there’s also that addictive gacha mechanism (sort of like a slot machine wheel) mixed in. The great Japanese games are about excitement, chance, the unexpected, and taking risks. The monetization is all around those emotions, unlike a western game, which is about going to a store and buying a better gun to go be powerful. It’s a very different approach.

GamesBeat: The violence level doesn’t seem as high as some of the other zombie games. It’s not so much of a splatterfest. Is that because of the platform again, because this is a broader platform?

Cousins: I wanted a game that would not be rated mature on iOS, because that reaches a broader audience. This game was on the expo floor at SXSW, and it was great to see kids playing the game. They loved it. But also, a lot of it just falls out of our intention not to make a typical zombie game. We didn’t want to have viruses and a city environment and a guy in a business suit with blood dripping out of his mouth. We wanted to break some of those clichés and hopefully have some of the stuff that’s exciting about zombie and post-apocalyptic settings, but without the, “Oh, okay, here we go again. It’s a George Romero game.” That ended up giving us a different violence level.

Things are still being destroyed and blowing up into parts, but there isn’t any red blood. It isn’t someone who was obviously previously a human being. It feels quite good to have a violent game, but not a gory or gross kind of game. 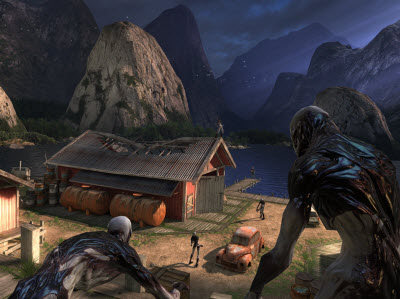 GamesBeat: It seems like zombie games got into that kind of arms race, trying to be…

GamesBeat: Do you have a sense for what the market is like for an action title? Is it going to appeal to different crowds?

Cousins: It’s probably going to see the most success with the audience in the west. I’m excited about the potential of China and Korea for a game like this, though, because shooters are big over there. I’ve done games that were released in Korea with EA. Guns and zombies and shooters are really popular in those markets. In Japan, not so much, but maybe the gacha elements and the collection elements might appeal to a Japanese audience. The Japanese guys at DeNA are split down the middle on this game. Some of them are like, “That feels a little more western,” but some of the guys in Japan really love the game.

GamesBeat: Is the touch screen doing everything you want it to do, or are there some improvements that could still be made?

Cousins: The touch screen itself is great. We’re not missing gestures or dealing with latency or anything like that. It’s a nice interface. I’m excited to do more touch screen games. We just want more powerful tablets. The team being who they are, they want the biggest CPUs and the biggest GPUs.

GamesBeat: Do you think the graphics level hits a mark where you could compare it to console or PC games?

Cousins: We’ve got high-dynamic range lighting. We’ve got color grading. We’ve got bloom. We’ve got normal maps and specular maps. Most of the techniques that you would use on a console are here, although maybe not a high-end PC game. It’s just that we’ve got less geometry. If you fit an Xbox game on this screen, it would be taking that many pixels. I’m not exaggerating. These are sub-720p games, so we’ve got to balance things out a bit.

GamesBeat: Is it harder to move fast, then?

Cousins: Things like fill rates, that particular computational task, are more difficult if you’ve got lots of pixels. At the same time, this has got more RAM than a PS3 or Xbox, so we can have high-resolution textures. It swings around and around. What we’re looking for, and I think we’re quite close to it — a game like Real Racing is close to it as well — is the point at which you say, “This is alright. This is okay. This is what I need. I don’t need a PS4. I don’t need an Xbox. This is good enough. This is more convenient and it’s free.” We want a certain console consumer to be thinking in that way.

We believe that there is an opportunity there. To see a game like Real Racing be a success—That’s the biggest download size for a free-to-play game. This is a 600 or 700 megabyte download like they are, and there haven’t been many freemium games on mobile that are that size. We feel like there’s a group of developers all moving in the same direction. We’re excited about everyone that’s going there, whether it’s NaturalMotion or Chair and Epic. We’re starting to see many more of these games coming through. It’s about time, I think.