Games of all kinds now take up about 10 percent of the leisure time of gamers in industrialized countries around the world, according to the Nielsen Gaming 360 degree Global Report. About half the population in these countries identify themselves as gamers.

And games have moved into the living room and beyond with strong usage across PC, console, and mobile devices.

“Gaming is as much an aspect of modern culture as anything else,” Nielsen said. “But as is the case with other consumer behaviors, gaming preferences and trends vary around the globe, which means that marketers need individual strategies to engage them.

Mobile gaming has made the growth possible.

“The ability to take gaming on the road and integrate it into our daily routines via powerful mobile devices has been significantly influential in bringing gaming into the mainstream over the past few years,” Nielsen said. “In North American and Europe, console and mobile are tied as the most popular gaming platforms, whereas mobile dominates the Chinese market by a wide margin. Comparatively, console remains the top choice in Latin America. Understanding the penetration of each platform across regions is critical for any publisher developing and launching global games.”

Nielsen said that the patterns of platform usage vary by market, but the picture of the modern gamer is consistent globally. 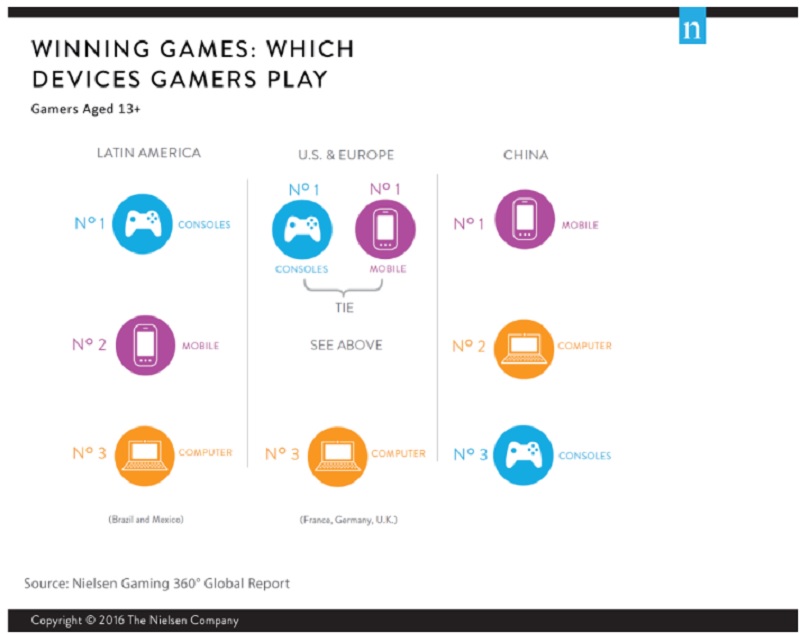 “Not only have the gamer boys grown up, but they’ve enticed their friends and families to join as well. Today’s gaming generation is very inclusive, with tailored experiences across demographics,” Nielsen said.

By now, gamers have become a balanced demographic across ages and genders. Mobile is the newest and most accessible platform to both men and women of all ages. However, we can see a shift in traditional hardcore gaming as well, with Lara Croft’s evolution from a virtual (and very pointy) pin-up model to a smart, scrappy and very real role model, highlighting how gaming has clearly broadened its audience, the report said.

Console gamers are still a little younger, and PC gamers are older. And both groups skew slightly male. In some regions, there are differences.

“For example, gamers tend to be younger in Latin America, while the average age of gamers is highest in Germany,” the report said. “As with all art, however, some trends transcend sociocultural boundaries. For example, Nielsen found that when it comes to console games, action-adventure, shooters, and sports are genres with universal appeal, driven by the highly successful blockbuster franchises in these genres. Regionally, specificities do emerge: Chinese gamers prefer role-playing games (RPGs); fighting games are a successful category in Latin America; and racing games are strong performers in the Western world.”

For mobile, puzzle and general entertainment are the most popular genres across markets, though again some regional differences exist. The casino/card/board games tend to be more popular outside of Latin America.

When it comes to monetization, gamers are very different around the world.

“When given the choice, people will always opt for free games regardless of where they live,” the report said. “This isn’t too surprising from an overall perspective, but it’s worth noting that there are country-specific payment preferences. For example, in the mobile realm, gamers in China and the Latin America markets have the heaviest preference for freemium titles, while players in Germany have a strong preference for paid games. At the end of the day, one thing is certain: Gaming is a global phenomenon, but marketers need to be sensitive to the specificities of each territory to make sure they fully connect with gamers.”

Nielsen’s data is based on a consumer online survey in the first quarter. More than 10,000 consumers were interviewed in seven countries, from teens to adults. Half of those surveyed were male and half were female.