Nier: Automata was one of the most-talked about games of 2017. The action role-playing game sold over 2.5 million copies after its February 2017 debut and has attracted a following that’s fallen in love with its unique, postapocalyptic world (and, to be honest, sexy androids). This is a surprising feat for a sequel for a 2010 game, Nier, that only sold about 500,000 copies.

At the Game Developer’s Conference in San Francisco earlier this month, I interviewed Nier: Automata’s director, Yoko Taro, and designer, Takahisa Taura. Taro has been the series’ shepherd. The franchise started in 2003 with Drakengard, a more fantasy-based action role-playing game for the PlayStation 2. The first Nier is a spinoff of that series. Taura is from Platinum Games, a studio known for flashy action games like Bayonetta and Metal Gear Rising: Revengeance. Automata was Platinum’s first project in the Nier franchise.

Both men have a clear respect for each other — Taura for the veteran director and storyteller, and Taro for the young, hard-working representative of a new generation of game designers. Taro started as a background designer for Bandai Namco arcade titles like the 1996 skiing game Alpine Racer 2, but Drakengard established him as writer of dark and unique stories. Taro’s reputation goes beyond his skills. He likes to wear an odd mask, itself a design from Nier, when making public appearances. It has helped to give him a reputation as an eccentric. Going into my interview, I wasn’t sure what to expect. But with or without the mask, Taro is a gracious, self-deprecating, and thoughtful man who is thankful for, if not a bit confused, by Nier: Automata’s success.

A bit more than a year after the game’s release, I talked Taro and Tauro through translators about that positive reception, and how it impacts their job as game makers. 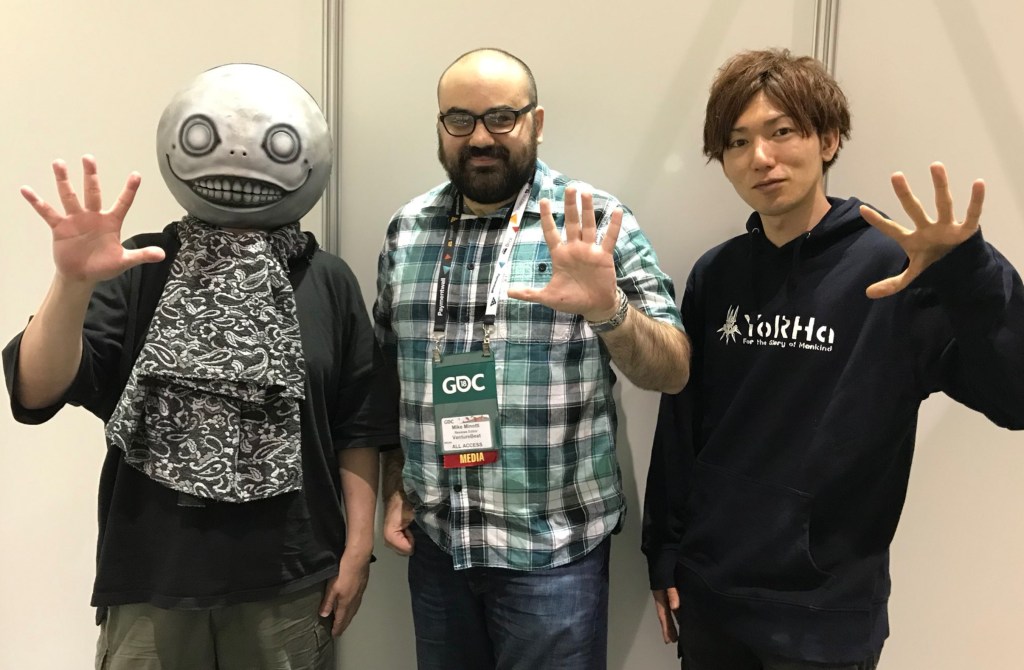 Above: Yoko Taro (L), me (Mike Minotti) and Takahisa Taura (R). Also I need to iron my shirt.

GamesBeat: Are you surprised by Nier: Automata’s success?

Yoko Taro: Yes. [Laughs] We just recently announced we’d exceeded 2.5 million sales. That’s one metric we can use. Our previous title, we sold only about 500,000 units. This time, I was thinking maybe around 750,000, because Platinum Games was developing for us. One-and-a-half times more seemed like a good simple calculation. So in that sense it definitely exceeded expectations. It’s amazing that media and fans will still come to see us, come to our panels, have interviews. It’s been a year where I felt a lot of support from our fans, that we’re able to do something like this a year after the game.

GamesBeat: I played Nier: Automata without playing the first game. Considering the sales difference between the two games, that’s true of a lot of Nier: Automata’s fans. What do you think brought so many people who’d never played the series before to this game?

GamesBeat: The characters really seem to have resonated with people, especially 2B. What do you think it is about her that developed this following?

Taro: I think it’s a combination of things. Her personality and her design are great. When we were creating the game we felt that she was a character not that many people would dislike, and so on the opposite end, I think that’s what led to so many people actually liking her. I also think that because her eyes are hidden behind the goggles — I assume it’s a lot easier to cosplay as her as well? That might also be one reason why she’s so popular.

GamesBeat: Hiding her eyes is interesting, because you’d think it would be a detriment. It should make it harder to read her emotions. But when she does rarely take her blindfold off, I get upset. It doesn’t look right.

Taro: The reason why — the biggest reason why we designe her with her eyes covered is because there aren’t any other protagonists that do that. We thought that would be unique for her. We didn’t even expect that it would be something that was really popular, or become popular. I’m surprised by that myself. 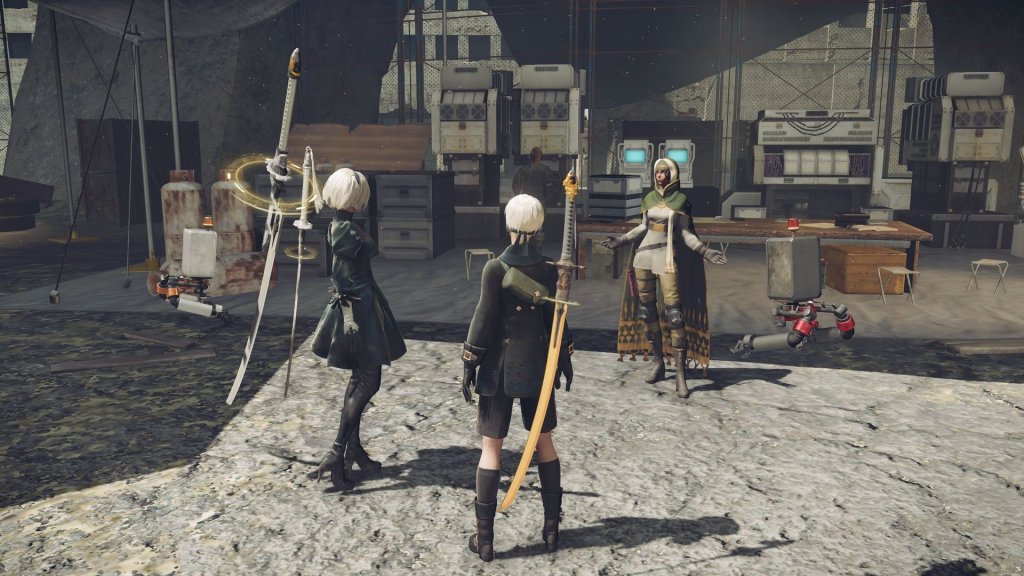 Above: Nier’s world isn’t a happy one.

GamesBeat: How is working with Platinum Games different from the other teams you’ve worked with in the past?

Taro: There are multiple teams within Platinum, but the specific team I worked with, Team Taura, is really young and powerful and they’re very talented in going through a lot of volume of work at a really fast pace. Especially compared to our generation. I felt that this entirely new generation of developers has started to bloom.

GamesBeat: For Platinum, what was challenging about taking this project on, compared to previous games?

Takahisa Taura: At Platinum, we’ve really never created games with an RPG element to them. We’ve been creating a lot of action games, but not RPGs. We did feel a lot of pressure to create a good RPG, especially because Square Enix is known for that. We had to try to keep up the brand image of Square Enix as much as possible. We also wanted to bring over what was really good about the original Nier. That was very difficult for us to do, a challenge for us to do. Also, the functions and back end development side of trying to create an RPG was all new to us too, that was very challenging.

GamesBeat: For people like me who didn’t play the first Nier, would you recommend that they go back and play that first one after finishing Automata?

Taro: No, I won’t. [Laughs] We make games that fit within a generation and an era. We also try to make sure that each game is fun to play on its own. So I wouldn’t recommend anyone to go back our previous title.

Taura: I personally would, as a fan. I would definitely recommend that you play. Especially if you don’t know anything about the previous titles.

GamesBeat: It’s a popular trend now to remaster old games. Would you like to see your older games remade, or do you think those should stay in the past the way they were?

Taro: That’s definitely up to Square Enix to decide. But personally, if we had that opportunity, I think I’d rather create something new than try to revisit something old. 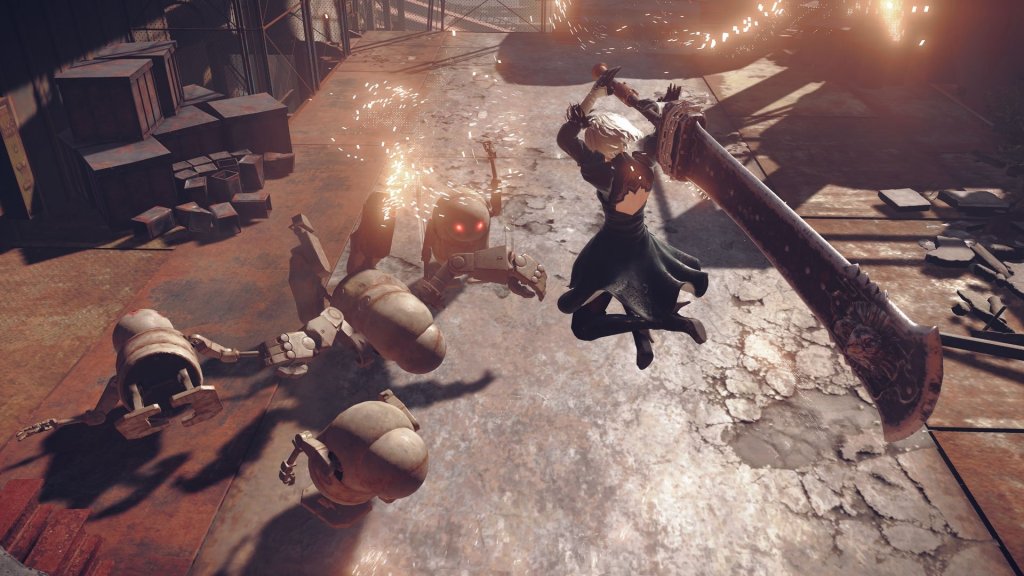 Above: Nier’s combat is over-the-top and fun.

GamesBeat: You’ve been famous for doing things like multiple endings and deleting players’ save files. Now that they’ve become your trademark, do you feel pressured to reusing those ideas?

Taro: Actually, multiple playthroughs and deleting save files are things that other games have done, so I don’t see myself as a forerunner of those elements in the game. If I am going to create a new game and I need to look for a surprising element, I’ll look for some kind of other great feature in a certain game that I can probably copy again. [Laughs]

GamesBeat: Does 2B’s popularity, and the popularity of Nier: Automata in general, pressure you to make a direct sequel featuring the same character?

Taura: I’d want to create something completely different. Since we’ve already completed one package, I feel more interested in creating something that’s completely new and different from what we’ve just made.

Taro: I feel the same, because I’ve completed that story of 2B in Nier Automata. I don’t really want to revisit that storyline. But I was just imagining, when you asked me, what if Square Enix comes to me and asks me to create a game that has 2B in it, if that was their order? I was thinking, because 2B is an android. Maybe I’ll just make her into a little bug. She’s an android, so she can be in any body. We’ll just put her eye cover on that bug. That might be fun to do. Nier, in the first game, turned into a truck in Automata. If that’s possible, then 2B could be a bug as well.

GamesBeat: I might actually like that! As long as she has the blindfold, we know it’s her. So much of the game is very dark and melancholy. Why did you want to ultimately end it on a happier, more optimistic note?

Taro: Our previous titles, the Drakengard series and Nier — because the protagonist kills so many enemies, it wouldn’t feel right if I gave them a happy ending after killing so many people. But for 2B and 9S, of course they kill a lot of enemies in this game as well, but they have been killing each other over and over again. In that sense I felt like they’re cleansed of their sins, in a way? I felt that it would be appropriate to give them a happy ending.

GamesBeat: That puts you in an interesting position. You’re passing judgment on and sentencing your characters. Do you think of the process that deeply, or is it something that naturally comes as you’re writing the story?

Taro: To your question, I guess I think it comes more naturally in a sense. I’ve always felt that it didn’t feel right for me when a protagonist goes through a storyline where they’re killing a lot of enemies, and at the very end of the story he ends up kissing the heroine and that’s where you end the game. It just didn’t feel right to me. So when I was creating my games in a way that I felt was right, it just ended up like that. 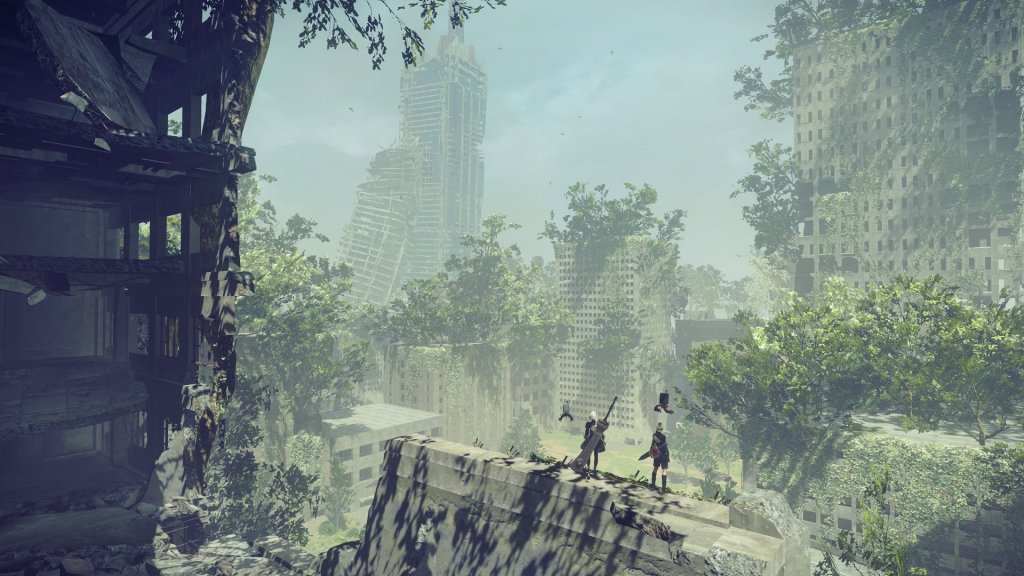 Above: It’s a ruined world, but it can still be beautiful.

GamesBeat: Does working on such a melancholy game affect your mood in your life in general?

Taura: Not at all! [Laughs] When I work on the storyline, I don’t really dive into a story. I think about how to create it, how to depict it in the game. I have a creator mentality. It just completely changes to that. I don’t necessarily empathize or sympathize with the characters while I’m creating the game.

GamesBeat: You mentioned during your panel at GDC panel that having a few drinks while you’re writing the scenario helps you. What do you like to drink when you’re writing?

Taro: When I’m writing it’s better to not drink something that’s too high in alcohol content, because I fall asleep right away, but those drinks taste better, so I end up doing it anyway.

GamesBeat: It’s been a year since the game’s release. What do you think is the main impact the game has had on your audience or the industry?

Taura: I think that at least in the industry, we were able to tell people, show people, that you really have to have a good ending to your storyline, and to your game in general.

Taro: I don’t think this has greatly impacted the industry yet, but I feel like we did open up a pathway with these weird-looking characters. We were able to show that blindfolded protagonists are okay to have. In the future we might have characters with weird masks on for the entire game.