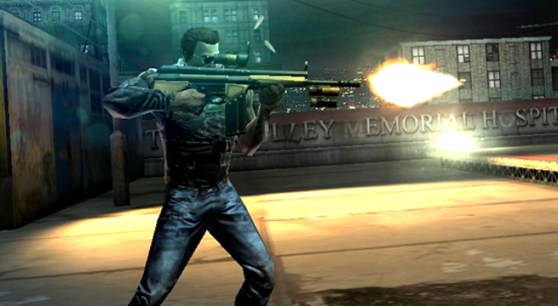 Something about Fightback just didn’t want me to take it seriously. Maybe it was the dark-haired Duke Nukem-type alpha male sporting tattoos and man cleavage on the title screen. It could’ve been his gold-plated assault rifle with a sniper scope and two laser sights. Or the fact that the game is a beat-em-up played on a tablet with touch-screen controls.

Then Fightback (due this summer on iOS and Android platforms) won me over. It’s not complex — it’s the opposite of complex — but it works far better than a touch-screen brawler has any right to.

That’s exactly what I’d expect from developer Ninja Theory (DmC: Devil May Cry, Enslaved: Odyssey to the West) and its creative director, Lu Gigliotti. This might be his company’s first free-to-play mobile game, but it carries a lot of the familiar Ninja Theory touches.

“We didn’t take [mobile game development] seriously until a big group of us went to this free-to-play summit,” says Gigliotti. “It really opened our eyes. We came out of there saying there’s a massive challenge and a massive opportunity here. After that, we decided to challenge ourselves professionally.” 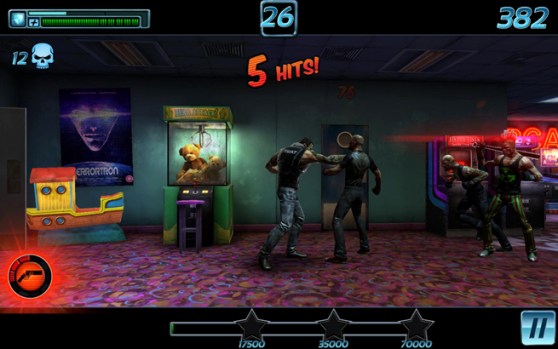 The result — “it’s Donkey Kong,” says Gigliotti — takes a throwback ’80s action-movie premise and shotgun-weds it to a throwback ’80s brawler using some of the tightest touch controls I’ve seen lately. You play a hulking bruiser ascending skyscrapers floor by floor to rescue your kidnapped sister. Each floor breaks down into three stages where waves of thugs come at you from both sides. Tapping the screen greets them with a knuckle sandwich. Swiping launches kicks. If you run into a particularly tough wave, pull out your upgradable gun, tap-tag every enemy you can in the second you have to aim, and mow everybody down in the ensuing cutscene.

Oh, but here’s where it gets interesting.

You control the angle of your kicks, and launching an opponent into the air with an upward swipe to the jaw turns him into your personal punching bag. Keep whaling on him to your heart’s delight; let him drop when you’re done. That gave me a surprisingly deep combo system to play with, nailing all comers with a blindingly fast mix of attacks and tactics. The touch controls are completely intuitive and surprisingly responsive thanks to some code that uses predictive behavior.

“If you even start moving your finger across the screen, [the game] anticipates it. ‘Oh, he’s swiping up; therefore, it’s a kick,'” says Gigliotti. 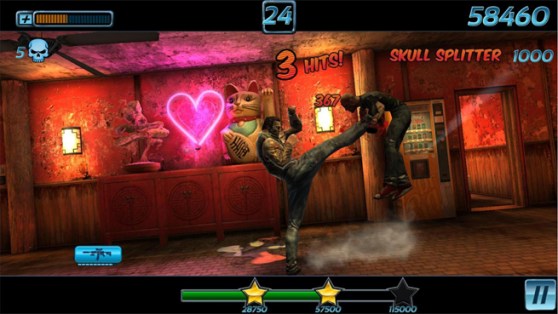 Once you reach the roof, Mr. Big drops a few taunts and flies off in his helicopter. Then it’s time to pick another building and work your way to the top again. Two districts were open in the demo, each with six or seven high-rises to conquer. You can also take that time to refill ammo and buy more upgrades with in-game cash (which you can purchase with real-world cash). Those increase punch/kick power, up the kill ratio on your guns, or even turn you invincible for the low-low price of 10 gold bars.

But the real fun begins when Fightback starts throwing different enemy types at you, some of which require dodging with down or up-swipes before slo-mo countering with an insane amount of whoop-ass.

“We created a base of more than 15 types of enemies,” says Gigliotti. “It’s like a bunch of ingredients in a recipe. We can adjust everything about them — spawn rate, speed, accuracy, damage, defense, and their special attributes on top of that. Mix that all together, and you have quite an extensive palette to play with.”

That’s a formula that Ninja Theory exploited to great effect in the past. Gigliotti added that boss characters also come into the equation later on, and some of them just keep turning up even after you defeat them. He almost made it sound like the last few buildings will be wall-to-wall bosses on every floor.

I enjoyed the small dose of carnage I got out of Fightback. Even with its bite-sized stages, Fightback looks like a fairly large game with dozens of levels, and it’ll take quite a lot of carefully-mixed challenges to sustain it all the way through. The opening moments, however, pulled me right in.

If anything, some of the enemies died too fast — I wanted to keep beating on them. In particular, I wanted the option to keep pounding on the last thug on each stage ad infinitum, working him over for as long as I could keep him juggling in the air. Gigliotti assured me that feature would be in the final game.