Ninja Theory announced that it will publish Hellblade: Senua’s Sacrifice on the Xbox One and enhanced for Xbox One X on April 11.

The game debuted last summer on the PC, and it was my favorite title of the year. Hellblade captures the journey of its main character, Senua, into a delusional nightmare. The Celtic warrior struggles with inner demons as she goes on a quest to save her beloved from the mythical Norse underworld. It is a terrifying game, thanks in no small part to the screams of Melina Juergens, who played the role of Senua and won an acting award for her first-ever acting role.

Tameem Antoniades, chief creative director at Ninja Theory, gave a talk about the making of Hellblade at the Game Developers Conference in San Francisco. He conveyed what it was like for the team to consult with mental health experts and patients and then envision what it was like for a warrior like Senua to suffer through psychosis — or seeing and hearing things that no one else could see. 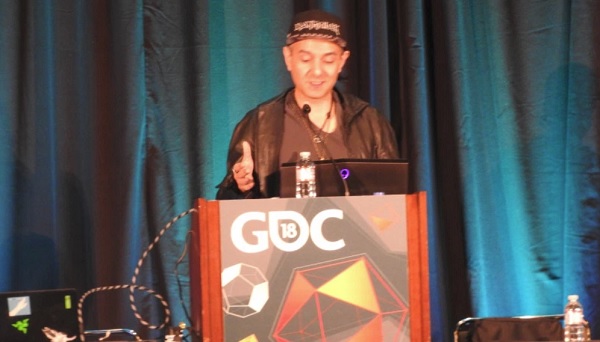 “Our goal was to create Senua’s mind’s eye,” Antoniades said in his speech. “We like to think that we are objective, seeing the world as it is. But we are so far removed from objective reality that this notion is almost nonexistent. We don’t experience the world in real time. The time for understanding what you’ve just seen can take a half a second. Our visual processing and auditory processing happen at different speeds, and so, it’s not in sync.”

When that breaks down, as it does with Senua, it can become a nightmare. Ninja Theory’s Juergens created a video documentary of the research and the game’s development, and the company even created a website to find out more about mental illness. 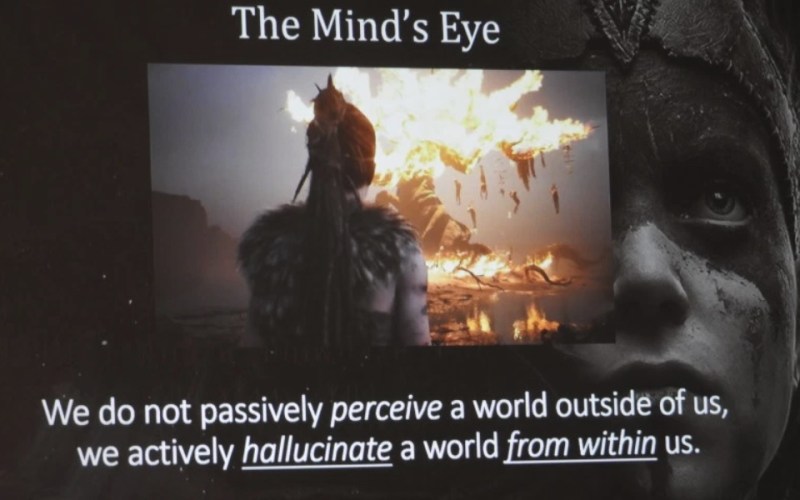 Above: How Senua sees the world.

“We don’t always perceive the world,” Antoniades said. “We actually hallucinate the world. It’s a simulation of the world our brain has created for us. Once we realize we do not see through our eyes but create worlds through our mind’s eye, we have a model of reality we can then deconstruct. Combined with the real-world experiences of people with psychosis, we have a real coming together of science, art, and human experience. This was the eureka moment for me. It means we are not seeing this world through the eyes of a camera man. Everything has to feel subjective, as it would look and feel to Senua through her mind’s eye.”

Hellblade on Xbox supports HDR, and the game is enhanced for Xbox One X, with players having the choice of three enhanced modes to select from. Enhanced Visuals mode offers extra effects and visual quality throughout the experience. High Framerate mode runs the game at 60 frames per second. And High Resolution mode runs the game with dynamic resolutions up to 4K. 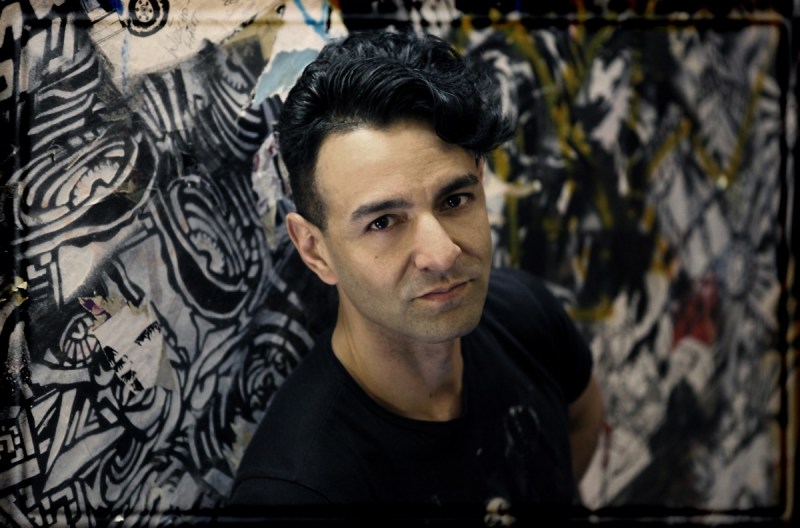 Above: Antoniades is a lead developer on Hellblade and chief creative director at Ninja Theory.

Xbox players can preorder Hellblade on the Xbox Store starting Monday and preordering or buying in the first week comes with a 10 percent discount on the $29.99/€29.99/£24.99 price.

If you didn’t catch this game last year, I’d encourage you to pick it up. The extremely detailed facial animations made this the first game for me that crossed the “uncanny valley,” which posits that the more realistic you try to make the face of an animated character, the weirder and more artificial it seems. Senua’s face expresses raw emotion, even if she isn’t speaking.

I liked how everything came together in Hellblade to support the idea of getting the gamer to empathize with Senua in her psychosis, a mental-illness condition where she sees things that other people can’t see. It lets you walk in her shoes. Senua solves puzzles by looking at a landscape from a different perspective. 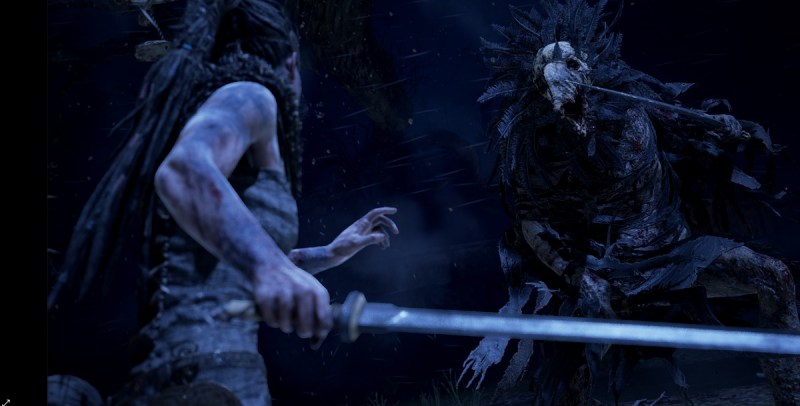 Above: Hellblade’s enemies may be in Senua’s mind.

She is haunted by voices in her head and chooses to listen to her own inner voice. As Senua descends into the underworld and battles monsters, you can’t really tell what’s real and what’s not. The dramatic tension is enormous, as the nearby sounds of creatures in the darkness are as terrifying as the scenes where you actually battle a demon in the darkness.

Four years in the making at an indie studio, the game was funded in part by biomedical-research charity Wellcome Trust, which gave Ninja Theory a $395,000 grant to do research on mental illness. That was money well spent, and gamers are the beneficiaries. 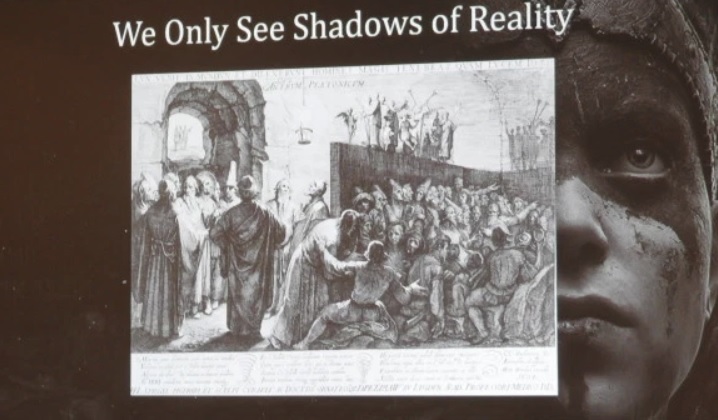 Above: Hellblade asks what if we only saw shadows of reality?

“Our mind’s eye doesn’t always see in the first person, and sometimes, we see ourselves in the third person,” Antoniades said. “I felt this would create a feeling of dissociation — like people who feel they don’t live inside their own skin.” 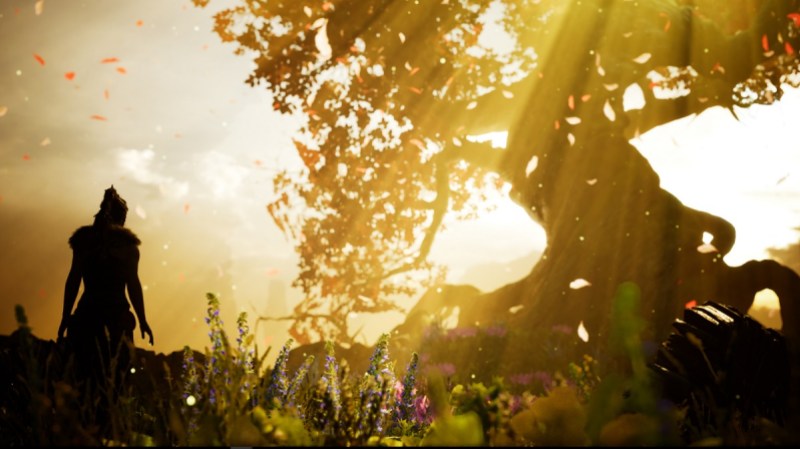 One consultant said that the thing about psychosis that hurts the most is that you can move from a scene of beauty to one of a nightmare in an instant, and Hellblade created such scenes to convey that sense of pain.

I encourage you to play this game. You won’t look at gaming the same way again.