Nintendo announced in Japan today that it will launch a new version of the Nintendo DS gaming handheld. Called the Nintendo DSi, it will be smaller than the current DS Lite but it will have larger screens.

It will also have an SD memory card slot for digital downloads, MP3 playback capability and two cameras, including one with a 0.3 megapixel camera with 640×480 resolution. Players can edit photos on the touch screen of the device and adjust the playback speed of music. Photos can be synched to the Nintendo Wii’s photo channel. 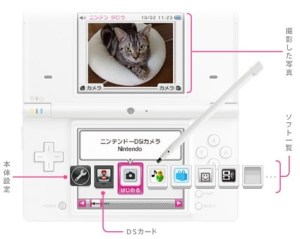 Users can buy downloadable games from Nintendo’s online store using the current form of money, dubbed Nintendo Points. The games will come in four categories: free, 200 points, 500, or 800. Nintendo will give away 1,000 points with the purchase of a DS-i for a promotional period.

Compatibility with the GameBoy Advance has been sacrificed. Without the cartridge slot for GBA games, the device can be smaller. Nintendo says that a web browser will be built into the DSi. It’s not yet clear when the system will make it to the U.S. or Europe. Some of the details, such as internal storage, are sketchy. 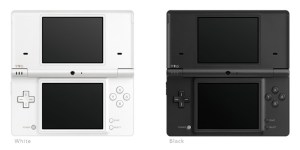 One of the interesting things about the new design is that these features will make the DS into a much more Internet-powered device, making it far more useful and flexible. The MP3 playback means that Nintendo is for the first time showing interest in making a foray into music, outside of games. That’s what Sony has done with the PlayStation Portable.

The cameras are also a nod to the camera-phone generation, though they will no doubt be useful in the cutesy games that Nintendo creates. 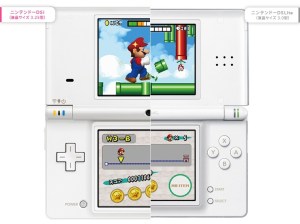 I wonder, however, if these features are going to make the DSi appealing to the broader market of music lovers who embrace Apple’s iPod. Nintendo may be responding not only to the competition from the PSP, which also has broader entertainment features, but the iPhone, which has been hailed as a cool gaming device.

It isn’t clear what steps Nintendo has taken to make a broad library of music or videos available on its online store. And, of course, it won’t be able to play songs that are protected in Apple’s own format. Hence, I don’t think this is much of a threat to the iPod. It’s more like a necessary modernization that will make the DS more appealing.

It’s very interesting that Nintendo isn’t waiting for anyone to knock it off its throne. Nintendo has sold more than 77 million DS units worldwide, while the PSP has sold just over 41 million. That’s a huge spread. The original DS debuted in 2004 with a fairly clunky design. Nintendo quickly replaced it with the DS Lite in the spring of 2006, and now the DSi is the third iteration.

Nintendo CEO Satoru Iwata demoed the new device at a press conference in Jpan. He also showed off the finished version of Wii Music, with debuts on Oct. 20 in the U.S. With that game, you can hold the Wii controller and pretend to play a musical instrument. As you move, you can make sounds.