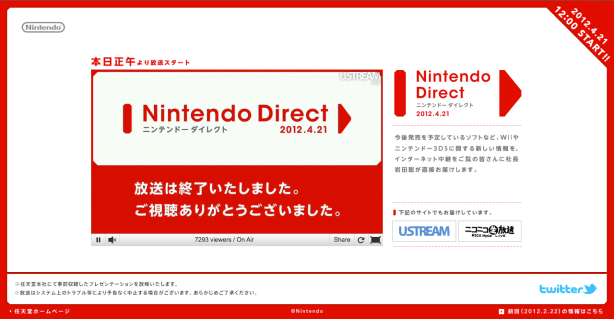 Nintendo announced an upcoming firmware update and a number of games coming soon for the 3DS in the latest installment of its sporadic Nintendo Direct video briefing from Japan tonight.

The firmware update, coming “soon,” will add folders to the system’s Home screen. Each folder can hold up to 60 items, and names are customizable. The update will also support software patches, one of the first of which will repair shortcut glitches in Mario Kart 7.

Nintendo also briefly showed a couple of new games, including a new installment in the Animal Crossing series due out in Japan this fall called “Tobidase Doubutsu no Mori.” “Tobidase” means “jump out,” in reference to the game’s 3D graphics as well as its wireless functionality.

The final announcement of the event was New Super Mario Bros. 2, a 2D side-scroller coming to the 3DS in August. Nintendo CEO Satoru Iwata said that with this title, Nintendo is “aiming for the new 2D Mario standard.”