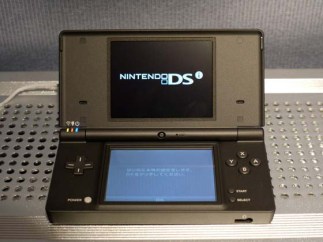 In what is sure to be a nice shot in the arm for the portable game industry, Nintendo announced today that its handheld DSi game player will hit shelves in the U.S. on April 5.

The DSi is an upgraded handheld with two cameras and is the third major version of the DS, which has sold more than 90 million units since its launch in 2004. It will sell for $169.99 in blue and black colors.

The upgraded DSi is as much a response to the Apple iPhone as it is a jab at second-place Sony, whose PlayStation Portable has sold more than 40 million units.The DSi launched in Japan in the fall and was a hot seller there.

New features have been named Nintendo DSi Camera, Nintendo DSi Sound and Nintendo DSi Shop. The cameras are positioned so you can shoot something in front of you and shoot yourself at the same time. The new DSi Sound can play music in the high-quality AAC format, and the DSi Shop lets you buy things right from your handheld using a WiFi connection.

These new features should give developers more ways to exploit the DS platform creatively. You can play your own music on the device, and you can control the pitch and speed of recorded voices or music. Games purchased via WiFi, dubbed DSiWare, can be purchased for as little as 200 Wii points, or a couple of bucks.

There are already more than 850 titles for the DS. A new one coming soon, made specifically for the DSi, is Rhythm Heaven, which has already sold more than 1.6 million units in Japan.

The timing is very important this year, given the recession. The game industry may have a tough time beating last year’s numbers for sales growth, given the headwind of the recession. But new launches such as the DSi may help counter that and keep sales chugging along.