Nintendo’s earnings for the fiscal year ended March 31 fell 60.6 percent to 16.5 million yen, or $148 million, on revenue of $4.53 billion (down 8 percent). That was a relatively weak performance for a company that once dominated video games and is now trailing behind rivals Sony and Microsoft.

Nintendo’s stock price has fallen slightly in trading, down 0.9 percent to $18.72 a share. The Japanese publisher saw diminished assets, cash flow, and profits during the year as the Wii U console’s sales sagged, and the Nintendo 3DS continued to suffer as a result of competition with smartphone and tablet games.

Rumors were rife that Nintendo would announce its NX dedicated game console to replace the Nintendo Wii U, which has been sagging in third place in the console battle. Nintendo finally confirmed today that it will launch the NX in March 2017.

Nintendo has also begun releasing mobile games, and others are expecting the debut of more on mobile in addition to the Miitomo social app. Nintendo said the launch of Miitomo went well,with about 3 million downloads altogether, according to App Annie. Nintendo launched Miitomo in partnership with mobile game company DeNA.

Back in February, Nintendo reported that it missed earnings targets for its third fiscal quarter ending December 31, largely because the Japanese video game company didn’t launch any major hits during the popular holiday selling season. 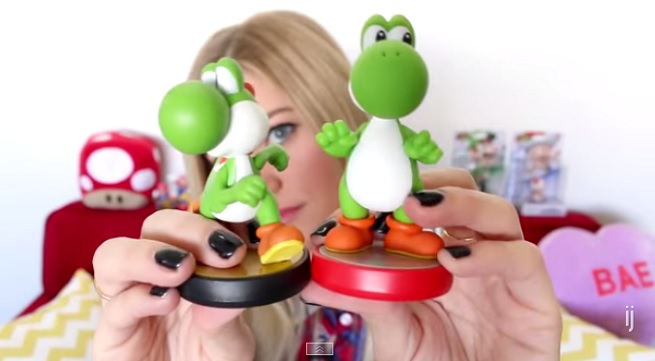 Above: Justine “iJustine” Ezarik shows off her Nintendo Amiibos

In the previous quarter, the Kyoto, Japan-based video game company reported net income of 29.1 billion yen, or $241.3 million. Nintendo was expected to report 33.2 billion yen ($275 million) in net income for the quarter, according to FactSet, up slightly from 31.8 billion yen ($263 million) a year earlier.

Nintendo has had a hard time keeping up with supplies of the Amiibo, the chip-based figurines that can sync with its games. Nintendo sold 24.7 million units of Amiibo figurines, while it sold 28.9 million units of cards.

During the year ended March 31, 2016, Nintendo said it sold 3.04 million units of Animal Crossing: Happy Home Designer, on the 3DS. It also sold 1.22 million units of Pokémon Super Mystery Dungeon. But these couldn’t make up for big sales of 3DS games like Super Smash Bros. from the previous year.

As for upcoming games, Nintendo will release Pokémon Sun/Pokémon Moon globally in winter of 2016 (holiday 2016 in the U.S. and late 2016 in Europe). These are the latest titles from the Pokémon series, which has sold 200 million units worldwide since the first title from the series released 20 years ago.

“Strongly anticipated titles from third-party publishers are also scheduled for release,” the company said. “With the release of these titles, we will re-energize the platform and aim to expand our reach globally to a broad audience, including female and younger consumer demographics.”

Nintendo plans to expand Amiibo sales and offer “new gaming experiences with the use of Amiibo.” Nintendo will release new smartphone games beyond Miitomo.

The company said, “We will aim to create a synergistic effect between the smart device business and Nintendo’s dedicated game system business to maximize the Nintendo businesses overall by growing our smart device business so that it is profitable on its own while continuously strengthening our connection with our consumers by enhancing features of our new membership service called My Nintendo.”

Nintendo said it will also continue branching outside of video games.

“Furthermore, our endeavors will not be limited to video games. We are planning to offer new attractions at theme parks featuring Nintendo characters. We will also strive to further increase opportunities for consumers to come in contact with Nintendo characters in their daily lives, such as through visual content and merchandising in order to maximize the number of people who come in contact with Nintendo intellectual property,” the company said.

Overall, Nintendo doesn’t have a lot to worry about from a financial point of view. Its cash hoard declined, but it has $4.8 billion in cash.