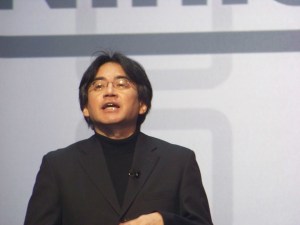 While Microsoft and Sony bash each other over hardcore gamers, Nintendo remains fixated on winning over nongamers. Satoru Iwata, chief executive of Nintendo, speaking at the E3 conference in Los Angeles today, said the company is trying to break down the psychological barriers between gamers and nongamers through more accessible games and more intuitive game interfaces.

“We want to be a pioneer in new paradigms,” he said.

Cammie Dunaway, head of sales and marketing for Nintendo of America, demonstrated this for the E3 audience with a snowboarding game starring U.S. Olympic star Shaun White. The game uses the Wii Balance Board, the bathroom-scale-like accessory that measures which way you’re leaning. White himself came out to show Dunaway how to lean back and forth to simulate snowboarding.

That’s an example of how big Nintendo is getting with the mainstream. But it’s also reaching hardcore gamers. How so? There will be a version of Grand Theft Auto, dubbed Chinatown Wars, for the Nintendo DS handheld. Just as Electronic Arts showed yesterday, Nintendo can span all of gaming from the hardcore to the masses of older and female gamers. Perhaps the broadest title that Nintendo will launch is Wii Music, coming this fall. You can use the motion-sensitive Wii controller in that game to play drums, orchestra instruments, all by waving your arms around in the air. The spectacular thing about this game: you can’t mess it up. All you do is swing to the rhythm or pretend to know what you’re doing and wonderful sounds come out. Nintendo chief game designer Shigeru Miyamoto, who demoed a saxophone song, said he didn’t even know how to play a sax. You can swing your arm over your shoulder to play a violin. You get the idea? Anybody can do it.

One way to get more consumers into games is to get consumers to become creators, Iwata said. But Nintendo’s formula is tried and true. It introduces new experiences to consumers, but it does so through the familiar franchises it has used over and over again. That’s how games such as Animal Crossing for the Wii, coming soon from Nintendo, can seem fresh to gamers. With that game, Nintendo is introducing a new accessory for group speak. Wii Speak is a community microphone that allows people to have a kind of group party line. With so much momentum behind it because of the success of the Wii console and the handheld DS, Nintendo can build a profitable and growing business just by dusting off a few franchises a year.

In the U.S. alone, DS unit sales have passed 20 million and the Wii has sold more than 10 million. That’s a $5 billion business alone, said Reggie Fils-Aime, president of Nintendo of America. Wii’s sales pace is increasing, he said. The Wii already leads worldwide and soon will eclipse the Xbox 360 in the U.S. About 19 third-party games have topped 400,000 sales in the U.S. alone.

But will it keep going as broader consumers start to feel an economic pinch? Can Nintendo get those casual gamers to start spending money like hardcore gamers? That’s a heavy burden for Nintendo to carry. The DS is going to get market-broadening titles such as Guitar Hero On Tour and Spore.

With the Wii so successful, Nintendo is breathing new life into the accessory business. In the past, this meant selling extra controllers. But now Nintendo is introducing a new accessory, the Wii MotionPlus, which attaches to a Wii controller, so it can more accurately capture your movements. So now you can use the Wii controller to throw a frisbee in a new game, Wii Sports Resort. You can also use it to throttle a jet ski. Dunaway and Fils-Aime also showed off how to use the controller in a realistic sword fight in that game, which launches next spring.

This move will answer complaints that the Wii controller hasn’t been accurate enough and that there was an opening for a rival to introduce a more accurate motion-sensitive device. Perhaps there is. But in the video game market, it’s becoming tougher and tougher to bet against Nintendo.

“We’ve all heard the same thing about Nintendo: fad,” Fils-Aime said. Some hoped that the Wii would pass out of favor like a fad. “I’m here to tell you that fad is no longer operable.”