Nintendo upped it spend in August to an estimated $6.2 million from July’s $5.8 million, while PlayStation is back on the chart after dropping off in July — but this time with just a single spot, promoting Marvel’s Spider-Man. FoxNet Games continues to apply a healthy budget to TV, while Niantic overtakes InnoGames to snag fourth.

GamesBeat has partnered with iSpot.tv, the real-time TV ad measurement company with attention and conversion analytics from more than eight million smart TVs, to bring you a monthly report on how gaming brands are spending. The results below are for the top five gaming industry brands in August, ranked by estimated national TV ad spend. 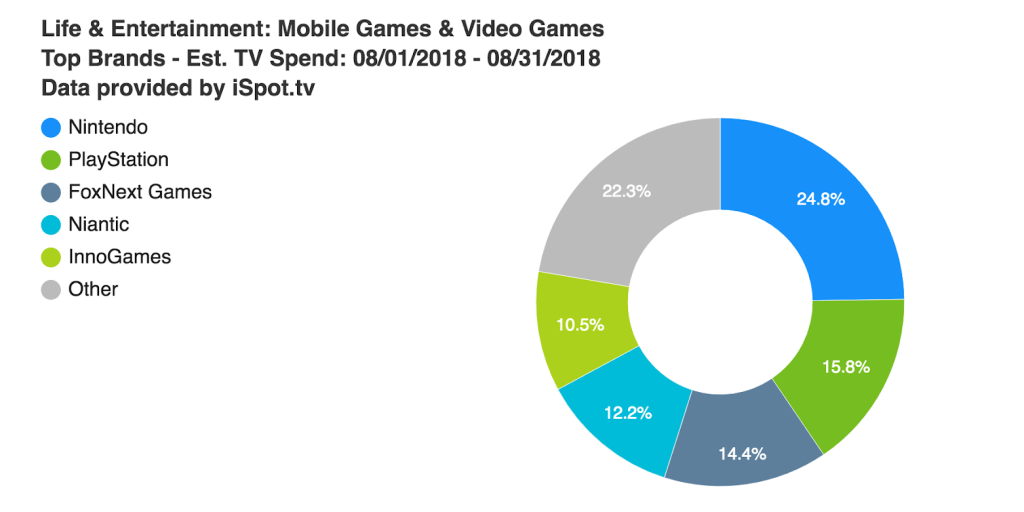 Once again Nintendo takes the lead, this time with an estimated spend of $6.2 million on 11 commercials that aired over 3,200 times, resulting in 395.5 million impressions. The ad with the biggest budgetary push — an estimated $2.6 million — was “Epic Games,” promoting multiple games for the Switch including Fortnite. The brand didn’t deviate from its favorite networks and programs; as usual it spent heavily across Comedy Central, Adult Swim, and Nick Toons, and during specific shows including South Park, SpongeBob SquarePants, and The Office.

PlayStation was back in the saddle for August, spending about $3.9 million placing one ad that generated 249.5 million impressions from 792 airings: “Marvel’s Spider-Man: Gameplay Launch Trailer,” promoting a game that’ll be available on Sept. 7. The company prioritized spend on networks including Comedy Central, Adult Swim, and ESPN, and during programming such as the 2018 Little League World Series, South Park, and The Office.

With an estimated budget of $3.6 million, FoxNext Games grabs third place. Its two spots had over 3,400 airings, which resulted in 387.3 million TV ad impressions. The bulk of FoxNext’s spend went to “Assemble Your Squad.” Fox, NBA TV, and History Channel were some of the networks it prioritized, while programs with high budgets included Hardwood Classics, The Orville, and The Simpsons.

At No. 4: Niantic, with an estimated spend of $3 million on one ad for Pokémon Go (“Play Together, Trade Together!”) that aired over 2,600 times and generated 310.8 million impressions. Niantic prioritized spend to reach a pop-culture-loving audience: top networks included Adult Swim, Comedy Central, and MTV, while some of the shows with the biggest budgets were South Park, Family Guy, and Bob’s Burgers.

Closing out the chart is InnoGames with an estimated spend of $2.6 million on five commercials that ran over 1,300 times and generated 284.2 million impressions. The Forge of Empires ad “Develop Your City” had InnoGames’ biggest push, an estimated $1.1 million. Some of the networks with the most spend were NFL Network, History Channel, and FX, while top programs included NFL Football, American Pickers, and The Simpsons.