Nintendo has officially unveiled its new Nintendo Network, a collection of services that will include personal user accounts on the Wii U, downloadable content on both the Wii U and the 3DS, and digital distribution of retail products.

Although we have known about Nintendo Network ever since the logo appeared on Theatrhythm Final Fantasy’s box art, there was no clear indication of exactly what the service would offer. During Nintendo’s third quarter financial results briefing, it was specifically outlined how Nintendo Network is going to be integrated into the two big Nintendo consoles: the 3DS and the Wii U. 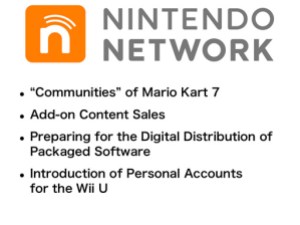 Unlike the current, archaic Nintendo Wi-Fi Connection, Nintendo Network will be a more integral part of how the systems function, much like PSN and Xbox Live for their respective consoles. There were mentions of DLC earlier in the month regarding the new Fire Emblem, and Nintendo of America chief executive Reggie Fils-Aime discussed the paid add-on content that would be coming to the 3DS late last year. Now it appears all of these plans are linked to Nintendo Network.

Paid DLC is not the only thing Nintendo will be adding with its new network. Wii U owners will be able to create a personal account system, a step Nintendo hopes will alleviate the frustration of countless families who share a Wii, but do not have dedicated profiles. Competitions and online communication will also be handled by Nintendo Network, a feature that has already been implemented in Mario Kart 7 as “Communities.”

Nintendo cautiously discussed the idea of offering digital distribution of full retail games, something the company says both the 3DS and Wii U are already capable of. There was no detail in terms of Nintendo’s long term plans regarding digital distribution, but the company is exploring the option. The huge losses and falling stocks have set a fire under Nintendo, one that will hopefully catch them up with the rest of the video game world.

Theatrhythm Final Fantasy is expected to be the first North American release that will include paid downloadable songs. We can expect to see a lot more of Nintendo Network in the near future leading into a very important showing at E3, and the launch of the Wii U this fall.