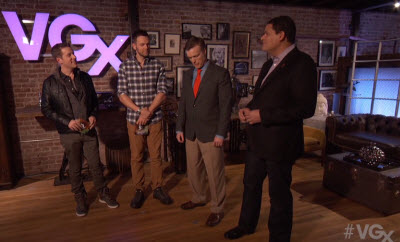 Above: VGX with Reggie Fils-Aime at Nintendo

Nintendo of America Reggie Fils-Aime took the stage today during Spike’s VGX online show to demonstrate the Cranky Kong character in the upcoming Donkey Kong Country: Tropical Freeze for the Wii U.

Fils-Aime showed how you can play cooperatively with Donkey Kong and Cranky Kong (the older, white-bearded character) on the show, hosted by Geoff Keighley and Joe McHale. The game is coming to the Americas on Feb. 21.

“It’s setting the stage for a huge year for the Wii U,” Fils-Aime said. “We’ve got Kart, Smash coming. It’s going to be a real strong year.”

Cranky Kong is a playable character who can jump higher than other characters using his cane. The demo showed two levels, including Bramble Scramble, which had nice graphics with plenty of interactivity. Cranky can kill enemies by doing cane jumps on top of them. He can also give Donkey Kong a piggy back ride and bounce jump across difficult areas. And he can also toss objects like bananas and barrels to get rid of enemies in the way.

In cooperative pay, you can fill up your “Kong Pow” meter and take out enemies much more easily.

Keighley and McHale engaged in a lot of banter with Fils-Aime about the competition from the Microsoft Xbox One and Sony PlayStation 4.

Nintendo is currently playing catch-up despite releasing its most recent home console a year earlier than Sony or Microsoft. The Wii U, which features a controller with a large tablet-style screen, isn’t selling very well. To remedy that, the publisher turned to its biggest franchises in recent months. The company released The Legend of Zelda: Wind Waker HD and Super Mario 3D World last month in the hope that its biggest characters could boost sales despite the system going head-to-head with Xbox One and PlayStation 4. But while Nintendo has some hot games, the Wii U’s sales have been stagnant this year. 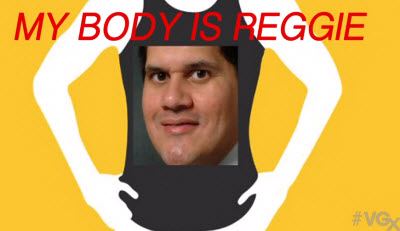 Above: Reggie’s body is ready

On the handheld side, Nintendo continues to perform well with its 3DS and now 2DS portables. Another new Zelda game along with a pair of Pokémon games have helped that system sell better than any other gaming device for the last four months.

“You need games,” Fils-Aime said. “We’ve got some of the highest-rated games anywhere. You can’t play these games anywhere else.”

Fils-Aime has been the subject of a lot of Internet memes, like his quote from a past Electronic Entertainment Expo video game show, “My body is ready.” Spike TV aired a few of those memes, like the one here. This was the first time Fils-Aime and Nintendo came to the VGX show. We’ll see if he comes again.