In the thick of the Super Nintendo Entertainment System zeitgeist in 1995, noted games magazine and company propaganda machine Nintendo Power started printing a section dedicated to role-playing games called Epic Center. It featured walkthroughs, previews of upcoming RPGs, import coverage, and sometimes even behind the scenes pieces. It was immediately clear that the intent of this new section was to grow interest in the ever-increasing genre’s presence on the SNES, but its appearance was indicative of a growing trend: the Japanese RPG as a subculture unto itself heralded in by the golden age of console RPGs. 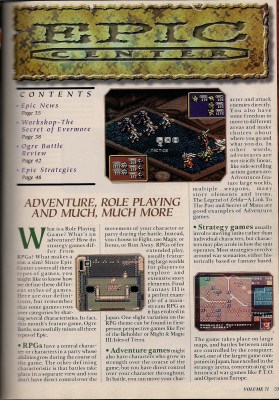 Above: Nintendo Power pulled out all the stops to build a subculture around RPGs.

Not that the genre was new at that point. The NES already had a respectable stable of RPGs that people loved. But the SNES upped the volume and pumped out classic after classic to the point where people had to pay attention, a strategy Nintendo is trying again very soon. The quality of the games, too, took a drastic leap forward in terms of presentation, narrative, and complexity. After Final Fantasy II (IV in Japan) came out, it was clear that the genre had finally come into its own.

It wasn’t long before all kinds of SquareSoft RPGs splashed the pages of Nintendo Power. One memorable spread featured a poster-length illustration of the Worlds of Balance and Ruin from Final Fantasy III (VI in Japan) along with Yoshitaka Amano artwork of several of the game’s main characters. Another set of pieces spent several issues revealing secrets and all the different endings of games like Chrono Trigger or Ogre Battle. One of the reasons Square dominated in this era is because they were experts at creating showpiece games, ones that you can share with people and they would immediately get excited to try for themselves. And the depth of content the games had compared to ones in other genres meant more excited playground talk about each other’s discoveries. JRPGs proved to be both incredibly visual and social in their appeal, and Square just about cornered the market of both.

Luckily, Square wasn’t the only company crafting classics. A lot of beautiful, experimental games showed up in the pages of Epic Center as well — ones that were just similar enough to Square’s lineup to capture the interest of the same audience. Take Lufia II: Rise of the Sinistrals, for instance. While not nearly as nice looking as Final Fantasy III, Lufia II was a colorful, beautiful game full of secrets and depth. At the same time, it fused typical JRPG conventions with overhead puzzle games, featuring dungeons with brain-bending puzzle rooms interspersed with enemies to fight. Publisher Enix was also very active during this era, publishing many cult classics and curiosities in the process, most notable of which was Quintet’s series of games like ActRaiser and Illusion of Gaia, which played around with strong, almost spiritual narrative threads. Illusion of Gaia was even published in partnership with Nintendo itself internationally in a bid to better promote the game, priming the public’s desire for epics. 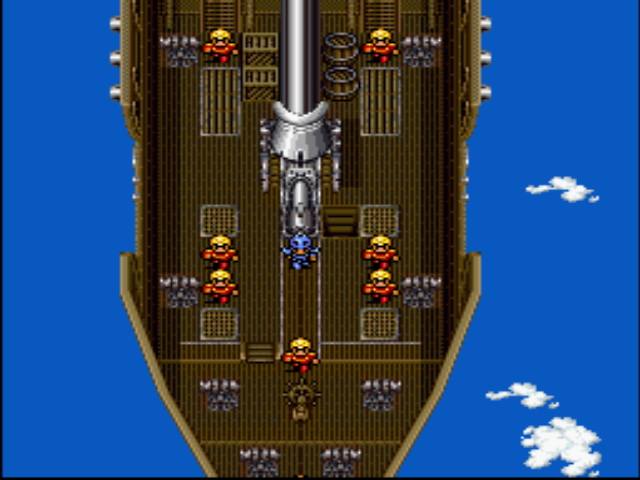 Nintendo didn’t get its hands dirty in this realm very often, but they did pave the way for some impactful RPGs to come out under their banner, emblematic of their knowledge of the JRPG phenomenon that was about to take hold. EarthBound, the brain child of celebrated author Shigesato Itoi, is often considered to be the best game ever made to many of its current fans who have formed incredibly active fan communities even today. But back then, it was clear that Nintendo knew it could be a big hit with the right prodding. And so the people at Nintendo Power pulled out all the stops to advertise this new, strange-looking RPG to the masses. It didn’t work, mostly because it used gross-out humor like scratch-and-sniff farts to appeal to the young audience, but the amount of effort they threw behind it is telling.

The other notable Nintendo RPG release is more obvious about the company’s approach to opening the RPG floodgates. Super Mario RPG: Legend of the Seven Stars, which was developed by Square, starred Nintendo’s mega-popular mascot. It’s a fun, influential game that introduced timed hits into turn-based battles, but the fact that Nintendo let someone make an RPG with Mario showed that it meant business when it came to the potential of RPGs.

In fact, it showed why something like Epic Center was necessary once the JRPG explosion hit. This generation of games was both visual and social, which meant that they were growing beyond the bounds of the playground. We needed to see these amazing adventures captured in memorable screenshots. We needed to salivate over all the secrets we could find in these games. And we needed a place where they all conglomerated, where we could find even more of these games. The world was ready to have a conversation about video games, and RPG fans of the era had a lot to talk about.

We’re still getting new releases of games from the 16-bit era that never made it to our shores. Both Final Fantasy V and Dragon Quest V weren’t released here until the turn of the millenium, and they’re now regarded as masterpieces themselves. And even well before that, avid import fanatics were dumping the game files onto the burgeoning Internet and translating the games so people could play them.

In fact, the SNES library at large became synonymous with emulation – playing old console games on your PC. Databases of dumped files known as ROMs sprung up as the Internet got more and more popular, and the SNES was one of the most popular systems featured on these sites. Rare and expensive games like EarthBound and Chrono Trigger could finally be experienced by the ever-growing SNES fanbase.

It’s safe to say that many of us got our love of RPGs from the SNES age, partaking in it even to this day. Today we have the Internet to talk about new RPG releases and learn about upcoming games, fulfilling what Nintendo Power started. Epic Center indeed.