Pocket monster are capable of amazing feats, like rallying investment in a game publisher.

Nintendo’s stock price is up 9 percent on the Tokyo Stock Exchange following the release of the location-based mobile game Pokémon Go. The iOS and Android app debuted Wednesday evening in the United States, and it has fans outside walking around looking for digital creatures to catch on a GPS-powered world map. The free download shot to No. 1 on the top-grossing chart in less than a day. With that level of demand, developer Niantic is having trouble keeping its servers up, and players are complaining about outages and connection issues.

Despite those early issues, investors like what they see.

A surge for Nintendo is not surprising. Most people associate Pokémon with Nintendo, and if that game is in a position where it is near the top of the revenue charts on iOS and Android in the U.S., that equates to a lot of income. But Pokémon Go isn’t exactly a Nintendo product. It comes from The Pokémon Company International, which is a separate entity that Nintendo only owns one-third of in partnership with Pokémon developers Creature Inc. and Game Freak. Having even just a piece of the Pokémon Go party should mean significant revenue for Nintendo, but this also keeps the brand relevant. That can only help Nintendo when it goes to release the next round of full role-playing Pokémon games, Sun and Moon, on the 3DS this fall and then whatever followups end up on the next-generation NX. 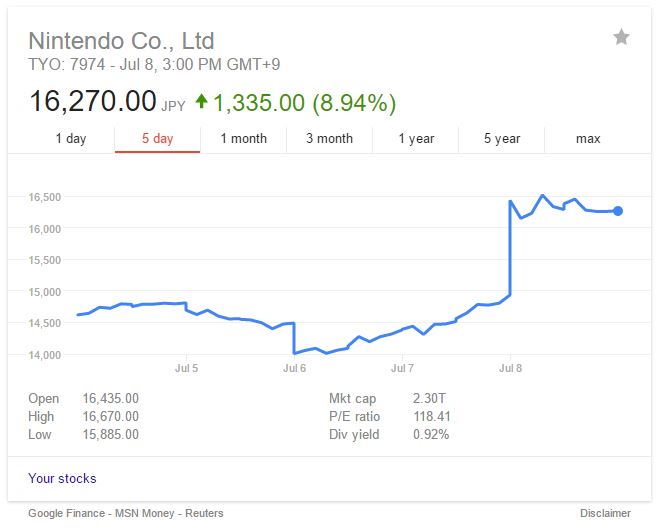 Above: Nintendo jumps thanks to Pikachu and walking.

Pokémon Go is also a demonstration of what traditional Nintendo console-only games can do on mobile. In March 2015, Nintendo said it was moving its properties onto iOS and Android. So far, that has only manifested as the Miitomo social platform. That communication game saw a massive spike in early downloads, but it never turned into a real revenue stream. That might’ve created some doubts about how Mario, Zelda, and others would perform, but Pokémon Go is proving that Nintendo’s brands have the appeal to compete with the top mobile games in the world.