After an initial teaser in October, Nintendo finally fully revealed its newest console — the Nintendo Switch — last week. The hybrid system — part home console, part tablet — is following the Kyoto-based company’s Wii U, which debuted in 2012 and has racked up less than 14 million systems sold.

At the Nintendo Switch event in New York City, I played the console for the first time. The good news? It’s better than I was expecting it to be, especially after watching Nintendo’s lackluster presentation the night before. But just the hardware itself may not be enough to win back consumer support, even more so after the Wii U.

The Switch will launch on March 3 for $300. Its main unit has a 6.2 inch screen with a 1280-by-720 resolution. It also has a capacitive touchscreen. As for the chip, all Nintendo is saying is that the console features a “custom Tegra processor powered by Nvidia.” When hooked up to a TV, the Switch can go up to a 1080p resolution, with a max of 720p in its portable mode.

The Switch’s audio outputs in 5.1 surround sound via HDMI (in other words, it has no optical out to the TV), but it does have a headphone jack. 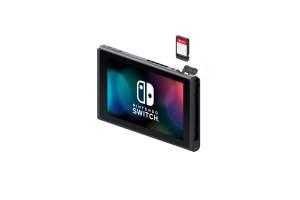 Above: The Switch will use game cards, not discs like the Wii U.

The system itself is smaller than I thought it would be, but I’m still not sure it is quite as portable as Nintendo is claiming. It certainly isn’t going to fit in anybody’s pocket, and even with a screen protector, it would still probably need some sort of case. At that point, things are starting to get bulky to carry around.

For software, Switch uses game cards — no discs this time (though you can download games digitally, too) — and has a paltry 32GB of internal memory. Nintendo’s solution for that is to allow players to expand that memory at will with microSDXC or microSDHC memory cards, but it’s still a far cry from competitors’ offerings for internal storage.

Given the system’s hybrid nature, battery life is also important. Nintendo is giving a wide range for that and claiming up to six hours per charge, while some titles (like The Legend of Zelda: Breath of the Wild) bring it down to around three. In my experience, both the Wii U GamePad and the 3DS had notoriously bad battery life, so we’ll have to see how the Switch actually performs in this regard when it launches. At least the console charges via USB-C this time around, as opposed to the proprietary charging methods of Nintendo’s past.

Joy-Con to the world

Nintendo spent a lot of time in its presentation talking about the Joy-Cons, the new attachable and removable Switch controllers that players can use in various configurations. The Joy-Cons weren’t easy to release from the system. The controllers have a release button on the back that you need to hold down while you slide them out, which can be tricky to do at the same time with one hand, depending how you are holding the controller or if you set it down.

Similar to the Wii, each controller can also be turned on its side and used individually. I was a little concerned about using them this way given their smaller size, but when playing games like Mario Kart 8 Deluxe Edition, this mostly worked, though I’m curious to see how longer play sessions will hold up. The Joy-Con strap, which docks to the top of the controllers when used sideways, does add height to the controller and two shoulders buttons.

It is a little weird, though, that the two controllers (Joy-Con L and Joy-Con R) don’t have identical button placement when turned on the side, and one of them (I’m not quite positive which it was), was more comfortable playing in the sideways fashion than the other. 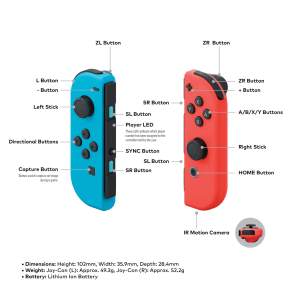 Above: Here’s a break down of the Joy-Con buttons.

The Joy-Cons can be docked in the Grip, which brings the two controllers together into something that resembles more of a traditional controller, though it does look weird being as square as it is.

But, the grip isn’t completely necessary. When playing Zelda, I actually used the Joy-Cons individually in each hand without the dock. I love controllers that can be work separately in each hand, and Nintendo is delivering on something I’ve wanted since the GameCube controller. 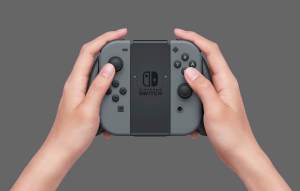 Above: The Joy-Con can be docked into the Grip to form a more traditional controller.

Some differences exist between the controllers, though. Joy-Con L has a share button while the Joy-Con R has an IR motion camera and an NFC reader for all those Amiibo sitting on shelves. I also wish the Joy-Cons and the unit itself had a bit more color symmetry. The gray (or neon red and blue) colors of the Joy-Cons make them look like detachable pieces when attached, not cohesive parts of the same system.

Nintendo has also packed a lot of tech inside the Joy-Con controllers. Both have a gyroscope and accelerometer, as well as the much touted HD Rumble. I’m a little torn on the new rumble. It isn’t anywhere near as deep as players have come to expect from other controllers, and it feels weird in some titles. For example, in Mario Kart 8 Deluxe, it felt like little balls were rattling inside the controller, something I’ve never felt when using, you know, an actual steering wheel. In Arms, the rumble felt like a fishing line casting and and unreeling in my hands. It made sense with the giant expanding arms in the game but was still a bit odd. 1-2-Switch showed how the rumble could work in minigames. One of the games, Ball Count, was interesting. I almost went to put the controller next to my ear to try to listen for the balls before remembering they weren’t actually in there. But it didn’t feel precise enough, and I’m not sure how the HD Rumble can add more outside of specific situations like that. 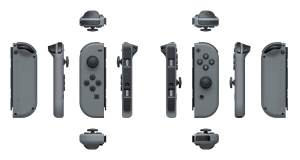 Above: The Joy-Con come in neon red, neon blue, or grey (pictured).

To do the titular switch, the device needs to be pulled out of — or put in — the dock, which then connects the console to a TV.  Putting it in the dock wasn’t as easy as it could have been, and it did take a little bit to get the Switch to fit correctly. Something to line it up properly in the space on the first time, every time could have helped alleviate that.

I’m also concerned about the constant wear and tear that may happen from pulling the screen in and out of the dock. Little bumpers are in place in the dock to prevent this — and one demo rep did assure me that they had put the units through a lot and hadn’t seen any scratches yet — but especially given the scratched screen fiasco of the 3DS, I’m skeptical. 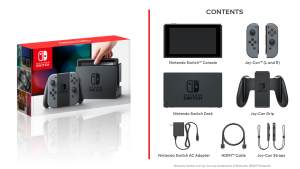 Above: Here’s the full list of what is included in Switch’s retail box.

I left the Switch event feeling better about Nintendo’s newest console. I’m excited for it, but Nintendo is far from nailing its launch. The initial price is high (the Internet is already foaming at the mouth over accessory prices), and I’m not sure if the ways they are showing it off are going to be enough to attract consumers, especially after the lackluster Wii U.

I also don’t think that HD Rumble — no matter what they end up doing with it — is going to be as big of a selling point as Nintendo hopes. It’s akin to trying to sell expensive top-shelf wine to somebody who just wants to get drunk or giving somebody Shakespeare when they asked for comic books. I don’t think most consumers are going to go crazy for it.

And if the Switch continues without a strong slate of games, it may not actually switch Nintendo’s home console fortunes around and end up being yet another new Nintendo console that fails to reach a wide audience.