You’ve climbed every mountain in Hyrule and raced your friends in karts across the Mushroom Kingdom. Now its time to beat people silly with Slinky fists in Arms for the Nintendo Switch.

Arms is a big deal for Nintendo. Its Switch console is an early success, but it needs more hit games if it wants to keep that momentum going. Following the launch title The Legend of Zelda: Breath of the Wild and last month’s Mario Kart 8 Deluxe, this is Nintendo’s third big software release for its new system. Many could have guessed that those games would be hits, but Arms could be the surprise success story of the Switch’s early days thanks to its unique fist-flinging gameplay when it comes out on June 16.

But Splatoon succeeded because it took a familiar format — the multiplayer shooter — and added a Nintendo spin to it by making it less about killing people and more about covering stages in your team’s ink color. And that’s how Arms earns its Splatoon comparison. Nintendo took something familiar — the 3D fighter — and gave it the Nintendo twist. 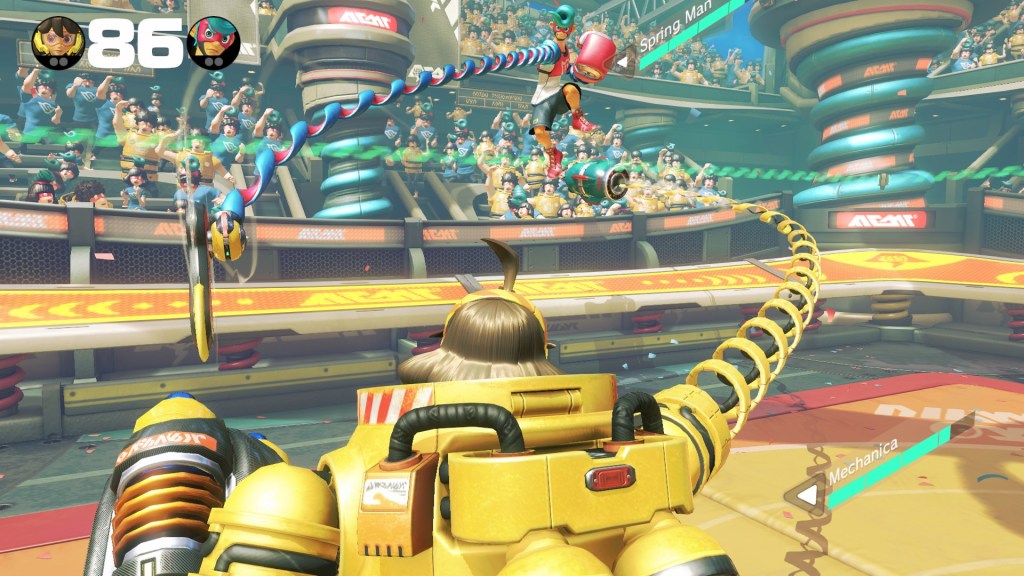 It’s a fun take on 3D fighting, and it’s much easier to explain how it plays than how it feels. Nintendo excels at making attractive games full of personality that control beautifully. Arms might not have legs (ha) if another developer took on the simple idea, but Nintendo is able to make the action feel responsive. Even small things like sound effects, which make those connecting punches feel much more rewarding, help make Arms a more visceral experience.

It works well even if you’re using the motion controls, which at first feel like a relic from Nintendo’s Wii days. Holding each JoyCon in your hands (these are those little controllers that slide into the sides of the Switch), you can throw punches and twist your fists to steer them. Sure, it’s a little gimmicky, but it does work. And there is something amusing about playing with a friend when you’re both jabbing like crazy toward the TV screen.

But I prefer playing with the controller. It’s just more comfortable, especially if I plan to play with friends or online for a while. And Arms’ unique fighting still works well on a traditional controller. Each arm has it own button, so you can still try to throw opponent off by timing your punches correctly. 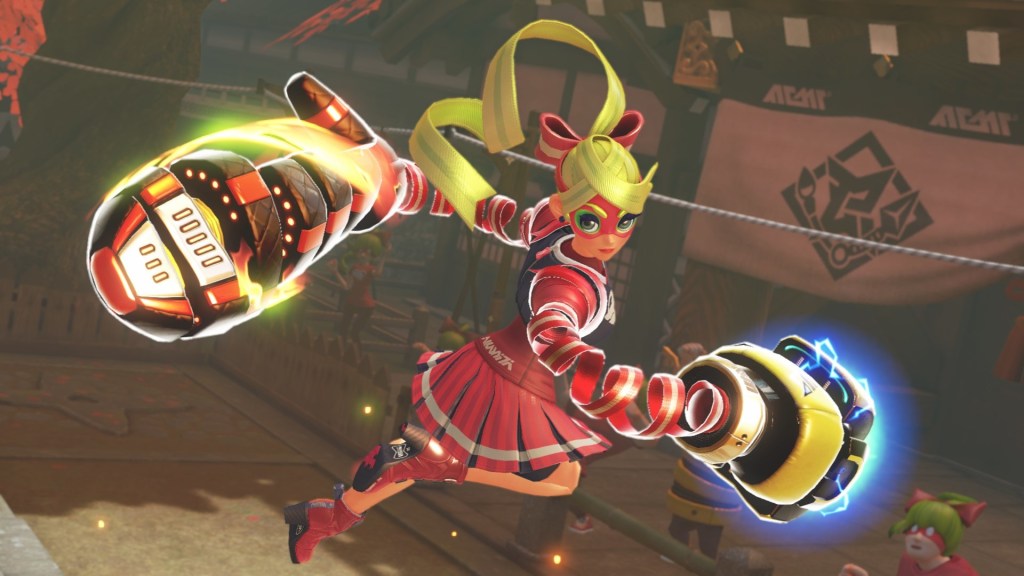 Above: You can equip different kinds of arms.

A lower barrier to entry

It can be hard to get your friends into fighting games, especially if you’ve been playing Street Fighter II since you were a child and they have no experience. These games can have a tough to learn because of their reliance on complex button inputs. You know, stuff like hitting down, forward, and the A button to shoot out a fireball.

Arms gets around that problem by forgoing special moves. You have three kinds of attacks. You can punch with your left arm, punch with your right arm, or throw people. Of course, there are complexities above all that with jumping, dodging, and charging your shots. You also have that super meter thing.

But compared to most fighters, Arms is easy to pick up and enjoy. New players will pick up the nuances, but they can have fun right away since the basics involve throwing simple punches.

It’s even easier to understand than Super Smash Bros., Nintendo’s other fighting game series. While the inputs for special moves in that game are easier than in Street Fighter, each character still has a lot of them. Every fighter has an arsenal of dozens of different punches, throws, and special attacks. Arms is a much simpler game.

The online modes are fun

When it comes to the online stuff, I’ve had good experiences. Multiplayer pairs you up with random strangers, pitting you into different modes. You could be fighting each other one round, and then you’re all teaming up against computer-controller boss in another. It might seem annoying that you can’t pick how you’re going to play, but there is something fun about the randomness of it. There is ranked mode if you’re looking for more serious, 1-vs.-1 stuff.

I also love that you can mess around and throw punches at target dummies while waiting for a match to start. It makes that wait feel less painful. The whole online lobby system feels less like waiting in a virtual queue to be paired against strangers and more like entering an arcade where you meet new friends to play games with. Arms keeps players together as long as they want, putting them up against a variety of game modes. Sometimes a player will drop out, but a new one will take their place. 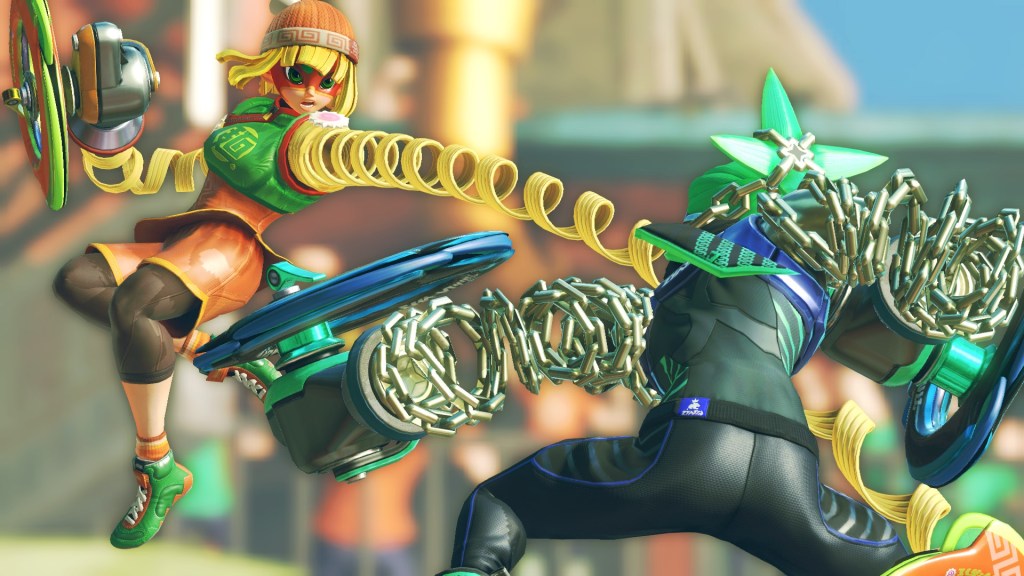 Above: Another benefit of having arms like that is reaching all of those itchy spots on your back.

Arms is a lot of fun, and the presentation is cheery and colorful. But it’s short on modes. It does not have a lot of single-player options. You have the standard fighting game arcade mode which has you play against computer-controller characters until you go up against a boss. It’s the same kind of thing we’ve been seeing since Street Fighter II. But even that old game gave you endings based on your character. Here, you just stand on a podium while the announcer congratulates you. I wasn’t expecting an Injustice 2-quality campaign, but a few still images with some dialogue bubbles between fights helping to flesh out the characters would have been nice.

It is fun that you’re not just spending credits directly on the arms or some kind of loot crate system, but it’ll take a long time to unlock all of them. You earn credits slowly, usually just a few or less for each match. You need 30 of them to spend the lowest amount of time allowed in the minigame, and that’ll probably just net you one arm for one character. 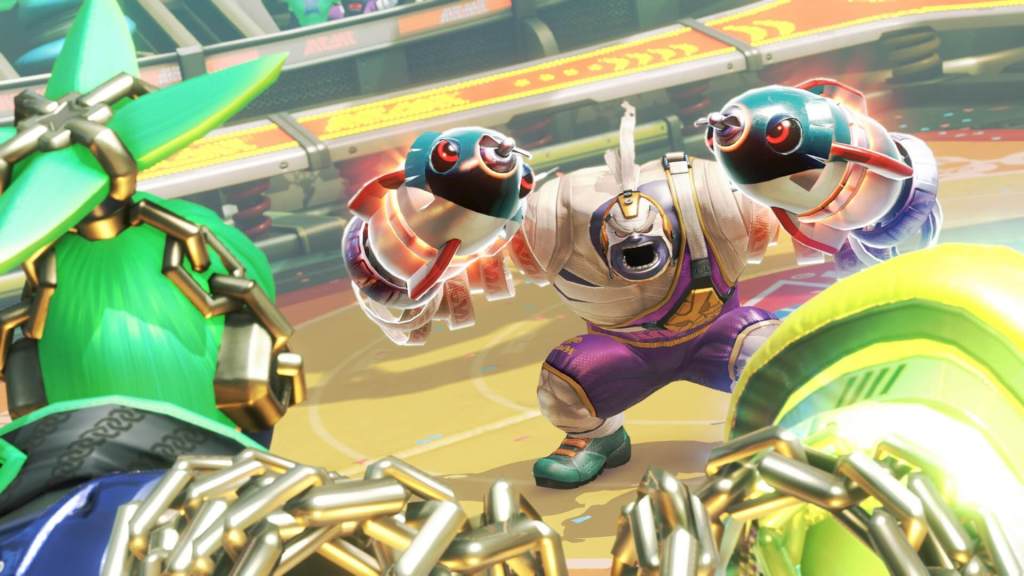 The package could be on the light side, but Arms is fun enough that it’s still worth owning. After all, most people will stick with a fighting game because they enjoy the competition. They want to try to master the game, and while Arms doesn’t have a lot of mechanics, you’ll need precision and timing if you want to consistently win.

But Arms also works with the more casual crowd. Friends that could never enjoy Street Fighter or Mortal Kombat because of their complexities can pick up and understand how this fighter works immediately.

Arms comes out on June 16 for the Nintendo Switch. Nintendo gave us an eShop download code for this review.