GamesBeat: Some of the higher-end 3D games are still going only to Sony and Microsoft. The Wii U seemed to be intended to catch some of that, but it doesn’t seem to be happening with games like Battlefield 4. Is that a worry for you, that some of these things that have not historically been on your platform have not been something you’re able to pull in?

Moffit: I look at it this way: We have a tremendous lineup of content coming. Those are experiences exclusively available on our system. We have great content coming from third parties as well.

Not every title will be coming to our platform. That’s been the case in the past. But the system is easier to program for and easier to bring a game to. So you’ll have to ask third parties those questions. They’re going to make their own business decisions as far as which titles make sense for our platform. But if you look at Skylanders, from Activision, we were the leading platform for that game. There are third-party publishers making great games for our systems. That will continue to be the case.

GamesBeat: Some consumer issues, like used games, are demanding more attention from platform holders and publishers than they once did. Has Nintendo experienced any change on its opinion on used games, since people seem to care about this more?

Moffit: The decisions we’ve made with Wii U are fan-friendly decisions. It doesn’t require you to be constantly connected to the internet. It is backward-compatible with Wii accessories and Wii games. We find that a lot of our fans are enjoying playing their Wii content on the system. We also allow for used games. On all of those dimensions, Wii U is publisher-friendly but also gamer-friendly. We want to respect gamers’ rights to own their games and do what they want with them.

GamesBeat: Community is another thing that’s changing. Things like e-sports and live streaming of game videos  have become pretty big. It seems like it’s consistent with this notion of directly conveying to the consumer what gameplay is like. Which is sort of what you guys do with Nintendo Direct. So that’s the part that I think everybody likes. But there’s also a kind of scary part, where people take Nintendo content and put it up on YouTube and potentially violate copyright. What do you do about that? How do you look at where this is and where it’s going and how you navigate it? 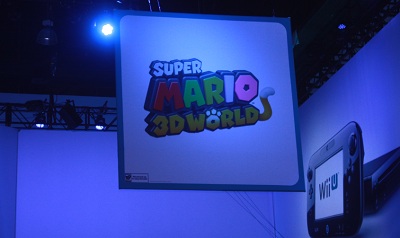 Moffit: I’d say our fans enjoy it when we put content on YouTube and show them gameplay. They like to share it. I guess I would bring it back to, a year later, how we’re seeing consumers respond to and use Miiverse. That social network for gamers has been embraced and has been a popular feature of the system. It allows game fans to share their gameplay, but also we’re seeing a lot of people share tips and tricks, share special moments that they’ve discovered in a game, and find help when they get stuck. We’re also seeing people have tremendous artistic abilities with their GamePads. They’re posting drawings and artwork that have astounded us.

So that notion of a safe, fun Nintendo community is one of the features of the system that gamers have come to enjoy. They’re sharing their gameplay that way. Yes, they also post videos out on YouTube, and fortunately the Wii U interfaces well with YouTube and other social media.

GamesBeat: I noticed that you had this CEO change, and the responsibility for that went back to Japan. Did that cause any changes in the way things are done in the U.S. division?

Moffit: No, not at all. It’s intended to help make decision-making quicker and allow [Nintendo CEO] Satoru Iwata to feel closer to the U.S., to be able to appreciate the needs of our market, and be able to respond to them more quickly. I think it makes a lot of sense. It’s not going to change the way we operate.

GamesBeat: What do you think of this soup of things happening with Android games and iOS games and free-to-play games and online games?

Moffit: The industry is ever-changing. It’s incredibly dynamic. Gamers are obtaining content and using content in so many more ways than they used to. It’s growing the overall universe of gamers. More people than ever are gaming in some form or fashion. That’s good for the industry.

GamesBeat: And the Android guys want to come break their way into the living room.

Moffit: As does Microsoft. Our mission is for Wii U to be the center of the living room and be a device that’s used every day. That’s why features like Nintendo TV and Miiverse are important features of the system – because those are features that almost beg you to use them every day. We find that it keeps the console active. It goes along with services like Netflix or Amazon Instant Video. It lets people use their console every day – many times for gaming, but not exclusively for gaming. The worlds of entertainment can converge there on the system.

GamesBeat: This whole marketing thing is complicated. I don’t know if I understand it myself. We have the idea of a gamer. We don’t call people “movie-ers.”

GamesBeat: Gamers watch movies, but when you have a press conference like Microsoft did where you talk about movies, then people get all mad, because they say, “What about the games?” Sony then says, “We’re all about the gamers. If you want games, come to us. If you want entertainment, go to the other guys.” But then Sony has an entertainment strategy that they talk about here. You guys have Netflix. There’s something puzzling to me about all of this. Do game console makers really have to make gamers the center of the universe, or can you just appeal to all kinds of people: the mass market, the hardcore — everybody at the same time?

Moffit: It’s a good observation. Nintendo has always been about pitching a big tent. We want to extend an invitation to gamers of all types, ages, and abilities. A game like New Super Mario Bros. U has all of that reflected right there in that game. The boost block allows you to play your game with a less experienced, less advanced gamer while you can play as a more difficult character. You can both enjoy that experience, even though your abilities differ. With Super Mario 3D World, you can play as one of four characters. Each character has a different style of movement and different abilities, so it allows you to play that same game in four different ways. They’re each a new experience and a new game.

GamesBeat: In New Super Mario Bros., my older kids were always yelling at my younger kids for not keeping up.

Moffit: Exactly. [Laughs] I was playing Super Mario 3D World with Reggie and someone from our product development team. Obviously, the product developers play the games deeply all day long. They were way in front of me. But we had a great time playing together, even though my skills are not nearly as developed as theirs. They enjoyed it as well as I did, and you can play it right there in the same game. 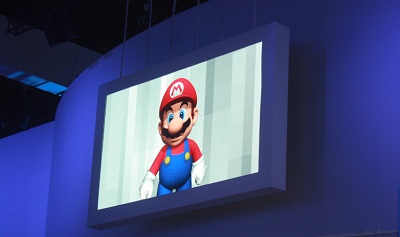 GamesBeat: Has anyone solved the question of how to properly market a console? Timing is maybe one thing. You target gamers with you initial message, get the box in houses, and then spread it out from there with a larger entertainment message. I think that’s how it’s been done in the past.

Moffit: Certainly. Hardware, like anything else, has a typical adoption curve where early adopters are going to be your more avid fans, people who need to be the first on the block to have a new experience. As you go through the middle stages of the life cycle, if you’ve had success, you see the user base broaden to more casual fans. By that point the price has come down a little bit. It’s more approachable for a more mass market. Then you have the late adopters at the end of the life cycle who don’t always come on board, but you hope they do. The price is at its most affordable and the game library is the broadest. You can reach into segments of the population that maybe don’t have as much disposable income. So I think your target does evolve over the life of a console.

GamesBeat: Have you thought about changing the price?

Moffit: No. We have no plans to change the price of Wii U. The Wii U is a great value. With great content coming, that will drive the hardware installed base. We’ve gone from being the highest-priced console on the market to now being a great value with the announcements from our competitors. The perception of our price has changed, but what’s also changed is that people now see what great content is coming. They’ll see the value in those games. They’ll be able to enjoy a Wii U in their household for a lot less than a competing console.

GamesBeat: Different things that have happened over the years have been midlife kickers that have come in to the market. You had some changes to the Wii platform with accessories like Wii Fit with the Balance Board. Are you thinking about any opportunities like that with the Wii U?

Moffit: There’s nothing we’re showing here today. I can’t predict what’s coming two years from now. Our developers are always looking forward to imaginative new experiences, though. We’ve only begun to unlock the potential of the GamePad. And we’ve got the Fit Meter for Wii Fit U, a device that allows you to track your calories away from home and at home. That’s an innovative extention of the Wii Fit franchise, which was a powerhouse launch for Wii. We hope it can have the same impact for Wii U.