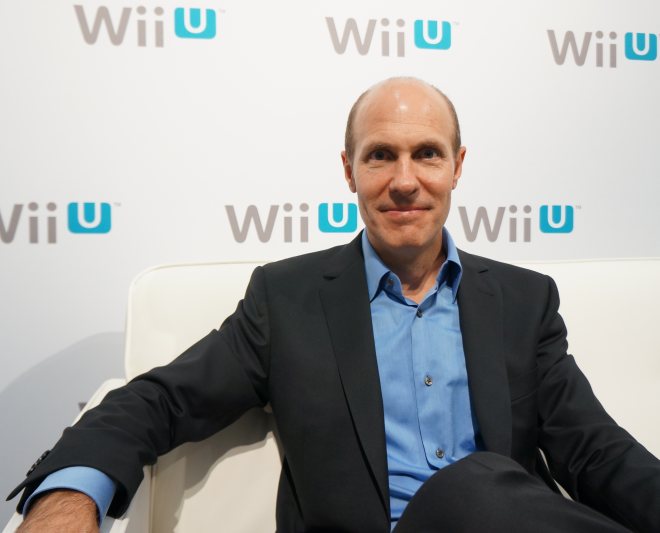 I love Nintendo. I hate Nintendo. As the company that first got me into gaming and technology, Nintendo will always hold a special place in my heart. But I’ve been frustrated by its move toward casual gaming with the Wii and its past missteps with the 3DS.

Now Nintendo is gearing up to release the Wii U, its newest console. It sports high-definition graphics and a tablet-like game controller. Yesterday the company announced that the Wii U will be available in the U.S. on November 19, starting at $299 for the base model and $349 for a deluxe model with added memory and a copy of Nintendo Land. It’s also taking a stab at living room entertainment with Nintendo TVii, a unified interface for searching and interacting with media across live TV, Netflix, Hulu Plus, and other services.

At the launch event in New York City, I got Nintendo’s executive vice president of sales Scott Moffitt take on the announcements. After joining the company last year, Moffitt has become the main person responsible for creating excitement for the Wii U. And as you can see from our conversation below, he’s thought quite a bit about what makes the Wii U compelling.

GamesBeat: Can you talk about the $299 price for the base model? That’s more expensive than the current consoles, and it also doesn’t come with a game. What was the decision in terms of pricing?

Scott Moffitt: Yah many factors go into pricing. … Let me talk first about our goal with going to a two-tiered model, to have two prices and two configurations, is to give consumers choice and provide flexibility. …  That philosophy really permeated a lot of the decisions. It permeated what price point it should be but also what to pack in with each of the configurations.

The $299 price point in the basic sense allows the broadest amount of consumers access to the Wii U and all of its technologies at a really affordable price. For $299 you get everything you need to enjoy Wii U, and you have the capability to add memory as you want, and we know the price of memory is dropping precipitously. But it also allows you the choice of game…you’re not locked into a certain game.

Certainly, we think a lot of those consumers may really enjoy Nintendo Land if they choose to buy it — but they may not. They may choose to buy New Super Mario Brothers U; they may choose to buy Zombie U. We don’t know. It gives them at least one option that does not have a game, that allows them to choose a game. The deluxe set [$349] comes with added memory, a couple of added accessories, and it comes with Nintendo Land, all of which also puts it at a great value for those consumers that know they’re going to want that extra memory and they know they want that game. 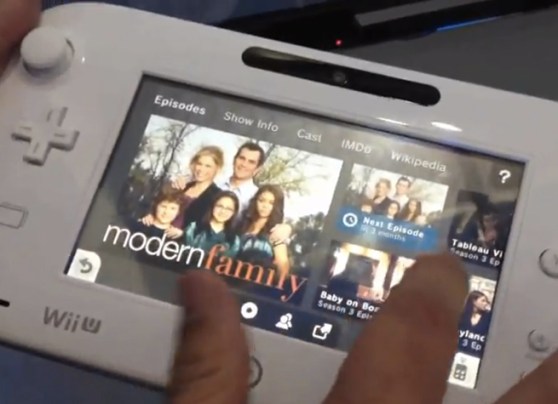 GB: So Nintendo Tvii, it seems like this has been a long time coming. How exactly are you guys trying to differentiate from what the Xbox and PS3 is offering?

Moffitt: So the idea behind Wii U is first we want it to be an everyday device. We wanted it to be the entertainment hub in the living room, in the family room, and we want it to be used every day. There are many ways to do that. Not everyone has a chance to sit down and play a three-hour video game every day, but they may want to access the web every day. They may want to watch TV every day. So having an application like Nintendo TVii increases the probability that consumers will turn on the system every day, use it every day, and interact with it every day.

Nintendo TVii is a great innovation. It differentiates ourselves from other consoles in a couple different ways: First of all…the vision is you can find, you can watch, and you can interact with TV like you’ve never been able to before. Starting with “find,” the gamepad allows you a very intuitive way to search for content regardless of its source. Whether it’s VOD, whether it’s live TV, coming from Direct TV or your normal cable provider, or any recorded content that you have, it searches all possible sources and displays for you what your options are. So it makes TV for me more fun and more intuitive, and easier to find something.

Once I find something you can activate it right from the gamepad controller, you can turn on that program, and it starts displaying on your TV. Then the interesting part begins, you can interact with that content  in ways you haven’t been able to before on a gaming console. You can share thoughts about the program you’re watching, you can let your friends know about that content and if they’re not watching it at that time you can message them and say, “Hey, great show here, you may want to turn it on,” and you can chat back and forth. So it integrates the social and interactive component with TV in a way that hasn’t been possible before.

Next: Wii U as Nintendo’s tablet stab, and the mystery of the tablet gamepad’s battery life