With Russia’s alleged hacking of the 2016 U.S. presidential election and the ongoing investigations related to it, the hidden worlds of cyberwarfare and cyberterrorism have never been more prevalent in pop culture. For Montreal developer Alice & Smith, that also means it’s the perfect time to release a game like NITE Team 4.

Out now on PC through Steam Early Access, NITE Team 4 is a simulated hacking game where you play as a new agent at the elite Network Intelligence and Technical Evaluation cybersecurity team. After grasping the basics of hacking at the training academy, you’ll take on missions for the U.S. government.

While the game doesn’t actually teach you the specific command lines and methods to pry into a global network of computers and cell phones, it’s still realistic enough to have a hardcore group of fans at the National Security Agency.

“We have a little fan club at the NSA, so a group of players working there are playing our game and we send them goodies and stuff like that. Part of the package never made it past their security, but we do send them stuff,” said NITE Team 4 creator and studio cofounder Andrea Doyon, laughing.

The irony of having NSA fans isn’t lost on the developers. Much of the concepts and technical jargon used in the game come from the infamous Snowden leak in 2013, when former NSA contractor Edward Snowden provided confidential documents to the press about secret government surveillance programs. Some of the hacking tools in the game, including XKeyscore and Foxacid, were taken directly from the leak.

But since the information in those documents have been outdated for quite some time, Alice & Smith had to speculate about how much more powerful those tools have become over the years.

“We want to make you feel what it’s like to be a cyber security specialist in 2018,” said Doyon. “Whether you do network intrusion, digital forensics and analysis, drone operations, raids — we want you to live that experience. To achieve that, we’ve done a lot of work with real professionals and companies from the industry to design the missions and the tools.” 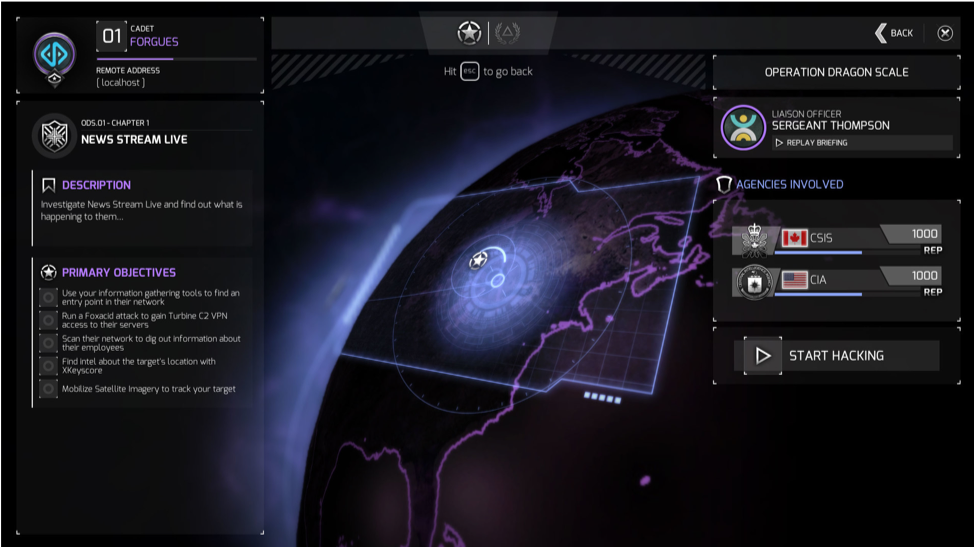 The key elements of hacking

But unlike the real world, where the NSA uses drab online forms and pull-down menus (as seen in some of the leaked documents), NITE Team 4 presents a futuristic, Hollywood-esque vision of cyber espionage with its fictional Stinger operating system. The StingerOS is your all-in-one hacking solution, putting a variety of powerful tools and technologies at your fingertips. The slick interface makes even file browsing through someone’s PC feel really cool.

Navigating through StingerOS can feel intimidating at first, but the tutorials are easy to follow and your colleagues (who speak to you via audio messages) help you along the way. The lessons you learn build on each other, to the point where just a few hours after playing, I was already cracking online passwords and using the game’s souped-up version of XKeyscore to search for personal information about my target.

While the developers are proud about the amount of research they put into the game, they didn’t forget that at the end of the day, NITE Team 4 still has to be an entertaining product. That meant simplifying some of the more mundane or obtuse aspects of hacking. A real password attack, Doyon noted, involves several more steps than what NITE Team 4 shows you and could take several hours to complete, which wouldn’t make much sense for a game.

“We focus on the key elements of a hacking scenario and how you can reenact those elements and think of what your hacking strategies are,” he said.

When designing the missions, the team asked themselves two questions: have they simulated the broad strokes of an actual operation, and have they encouraged players to think strategically. Alice & Smith wanted the gameplay to be more about those decision-making situations, like deciding if you should use network intrusion or your data forensics toolkit to gain access to a file, and less about technical solutions that would befuddle anyone who doesn’t have an engineering degree.

That said, the studio hopes that players will still learn something new about how
cybersecurity specialists work in the real world. 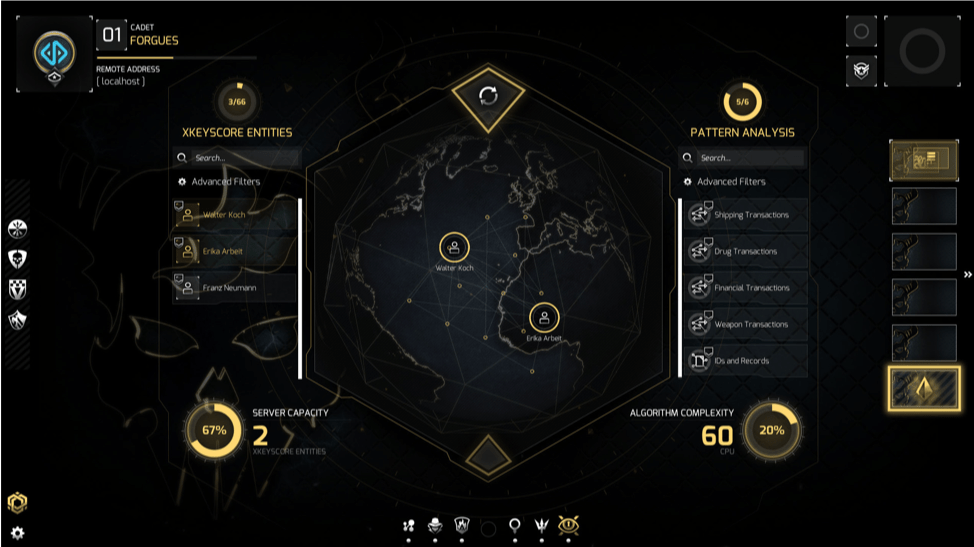 “If you’re an IT person, I think we can help you learn about tactical principles and approaches for hacking,” said Doyon. “And if you’ve never done that before and you’re just a gamer, you will still get a kick out of NITE Team 4, and you will get an understanding of real cyber scenarios and how they’re being executed and how they operate. The missions are mostly based on actual events that either have happened or we’ve been briefed by security companies on how they’ve happened.”

Even real-world industry folks want it

Alice & Smith enjoyed working with the security firms so much that it started selling a special version of NITE Team 4 that corporations can use to train their employees. In addition to the base game, the software also contains the Hivemind editor, which allows companies to construct a cyber range, a digital environment where users can safely create and test hacking scenarios.

The developer recently signed a contract with IATA (the International Aviation Transportation Association) to use NITE Team 4 for training security analysts in the aviation industry.

“Not many games bridge professional and entertainment products like we do,” said Doyon.

Players can also get their hands on the editor as a $60 piece of DLC called NITE Team 4: Network Administrator. The reason for the high price point (the game itself is $30) is that the studio only wants people who are serious about making content — and who have the technical background to do so — to purchase it. Anyone who has Network Administrator or the corporate version can then publish their custom-made missions for all NITE Team 4 owners to play. A peek into a larger world

Between user-generated content, monthly mission updates (based on the latest hacking incidents), and bounties (additional side quests), players will have a lot to do even after finishing the main campaign. It’s part of Alice & Smith’s plan to make NITE Team 4 an ongoing experience, one that fleshes out its growing Black Watchmen universe.

NITE Team 4 is actually part of a loose trilogy of games that started with 2014’s The Black Watchmen, an alternate reality game (ARG) about investigating paranormal mysteries using both the game and real-world interactions (scouring websites, receiving calls and text messages, etc.). The developers further explored the occult side of the plot with puzzle-solver Ahnayro: The Dream World. Some characters, including NITE Team 4’s Agent Wheeler, appear in all three, with their personal stories evolving with each new release.

Weaving all those disparate gameplay styles and story threads into a coherent narrative is an ambitious task. But it’s an expertise that Doyon and his cofounders have been building since 2007, when they were working at a marketing company that created ARGs for developers. That’s what made them fall in love with the game-making process in the first place, enough to ditch the advertising industry in favor of full-time development.

“Transmedia is the core DNA of the agency and it’s the core signature in all of our games. That and the fact that you’ll learn something and it’s all based on something from real life. That’s always been our goal,” said Doyon.