Professor Layton vs. Phoenix Wright: Ace Attorney is a pleasant surprise. It’s a mashup with production values galore and a deep story that handles its popular characters in a lighthearted fashion.

The new Capcom/Level 5 production brings a high-end score and a lovely layered 3D animation style to the puzzle-solving Layton and courtroom-drama Wright series. It provides a couple dozen hours of solid gameplay — more if you’re the type to find every last hint coin and press every last witness’ statement.

Much of the gameplay remains the same. As in the original series, Professor Layton and his apprentice sidekick Luke examine environments for clues, talk with people and solve puzzles for points. If you get stuck, you can use “hint coins” — which you find by clicking their hiding places on screen — to get progressively more helpful hints on the puzzles.

Phoenix Wright also conducts his trials much as he does in his original games. You’ll interview witnesses on the stand, pressing them when you think they’re not telling the whole truth, and present evidence that contradicts their statements. Layton vs. Wright adds the wrinkle of using one witness’ testimony against another, but the old “Objection,” “Hold It,” and “Take That” bold, red splash screens remain the same.

Alas, Layton and Wright aren’t pitted against each other in this installment, despite the title. They’re both sucked into the alternate medieval-style universe of Labyrinthia, where they must work together, but separately, to figure out the whodunit. 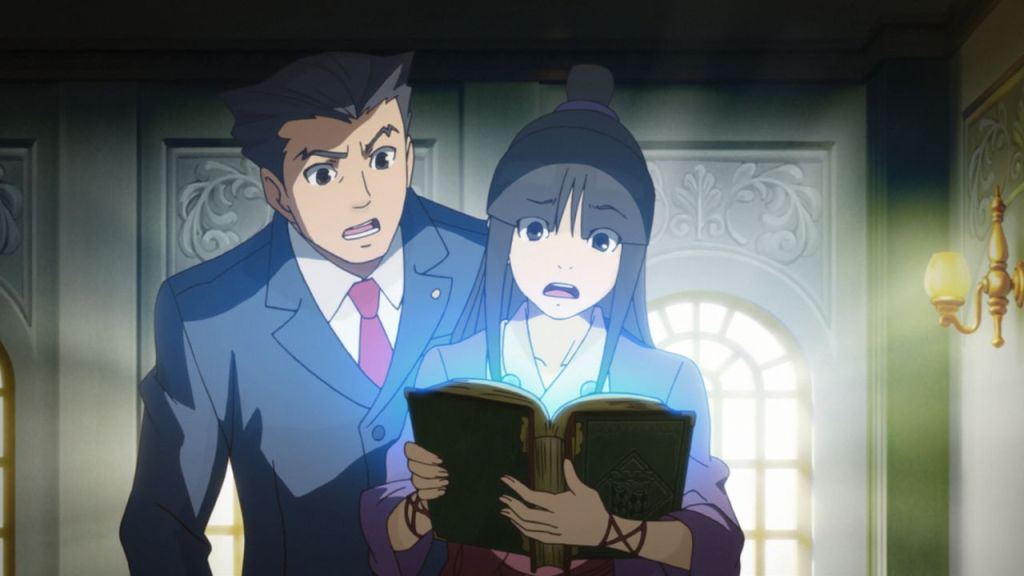 Above: Phoenix Wright and Maya prepare for a trip to Labyrinthia.

A fun, deep, detailed story with a dark side

Most mashups are afterthoughts, a quick way to earn a little cash, like walk-on crossover cameos on TV sitcoms. Not so in Layton vs. Wright. The game has a full, deep story, as both men help a mysterious girl with a secret, who gets them pulled into her world. Even minor characters get tiny, better-than-average side storylines, making the game world feel fleshed out and immersive.

As the adventure begins, Professor Layton and his apprentice attempt to help a young girl, Espella. She’s stranded in London after a mutual friend helped her escape the clutches of some mysterious witches, who are still chasing her. Layton and Luke are eventually drawn into the book the girl always carries.

Phoenix Wright is across the pond as well, part of a U.S.-U.K. legal exchange program, and the client he’s drawn to represent … is the girl, again, apparently unaware of the previous story. He proves she’s not guilty of assault and burglary as charged, but then he’s drawn into the same book with his assistant, Maya.

Layton and Wright make their way in the strange medieval world of Labyrinthia, where they soon meet.

You know you’re in for a serious story when after close to two hours of play, you’re still getting the occasional tutorial-style hint and haven’t yet hit the first chapter. Settle in, because this plot will captivate you for the long ride, and the dénouement is just as satisfying as the start. 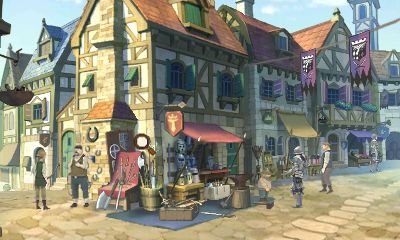 Above: Environments in Layton vs. Wright are painterly and beautiful.

Layton vs. Wright remains a 2D game at its heart, based on the prior series, so the 3D conversion for the 3DS is through layering. Dialogue, characters, and background elements stack up to provide a beautiful, deep look without making the full-3D animation cheesy.

Characters are beautifully drawn and animated, their movements helping to build their personalities. Yes, Layton and Wright still do a lot of dramatic pointing — series fans wouldn’t accept anything less — but even secondary characters get some major love in this production.

Phoenix Wright’s animations in particular help his “fish out of water” role in Labyrinthia to truly stand out.

A soundtrack worthy of leaving the volume up

Forget plinky Nintendo DS soundtracks. Layton vs. Wright brings you a robust score. Key moments are voice acted, and the dialogue is both well written and well delivered. The orchestral score brings strings and drama to the soundtrack. And the sound effects at key moments throughout the game make it feel three dimensional and real. The overall sound mix would be at home in a TV animated series.

The sound all but disappears into the animation, bringing drama at the right moments and adding to the immersive experience. Tomohito Nishiura and Yasumasa Kitagawa’s musical score is beautiful and worth listening to on its own. It’s a tremendous addition to the proceedings.

If you’re looking for hardcore challenges, this isn’t the game for you. But that doesn’t mean the puzzles and courtroom twists aren’t satisfying.

Layton vs. Wright accomplishes something extremely difficult. It poses puzzles and evidence challenges that are fairly easy. But they feel difficult — thereby making you feel smart. Multiple cross-examination scenarios, where you use one witness’ testimony to contradict another witness, add to the complexity.

If for any reason you do run into problems on a given challenge, the hint coins you can use to guide you to better choices all but fall from the sky (typically three hide in any particular setting). You can use them to help select or eliminate options in both Layton’s puzzles and Wright’s courtroom exchanges.

If the game wasn’t so long, speeding through challenges would feel frustratingly easy. As it is, the pace of gameplay during puzzles and trials is quick — quicker than it is in dialogue sections (more on that in a minute) — keeping your interest in the story high. 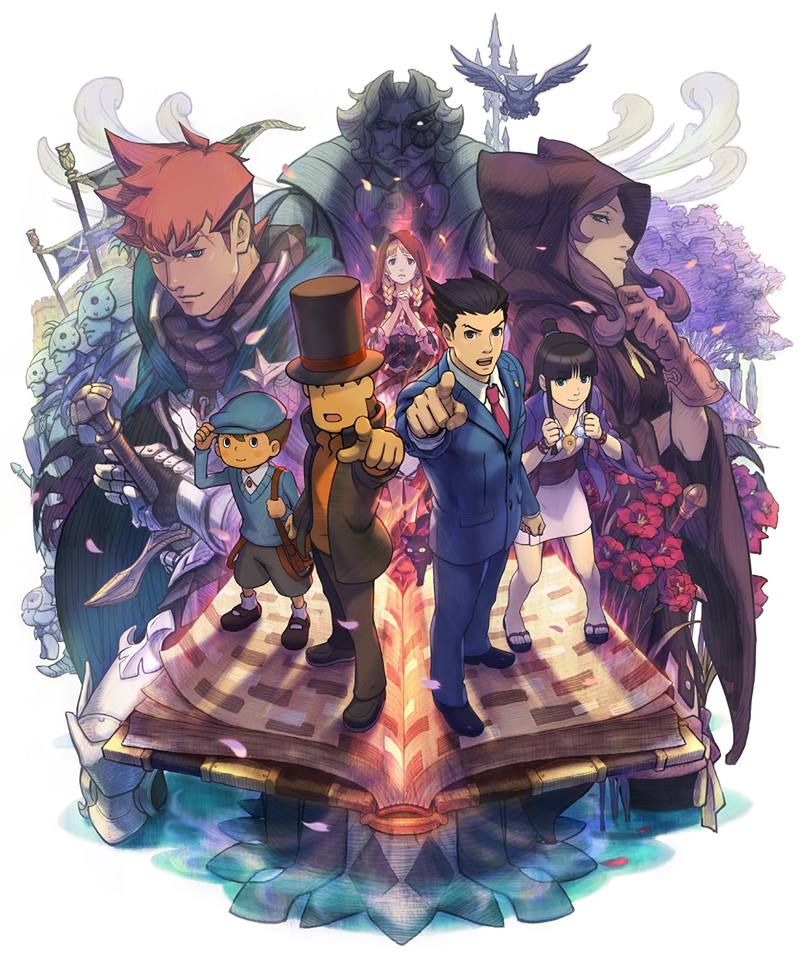 Above: Professor Layton and Phoenix Wright: two people who like pointing.

A terrific sense of humor

Both series have had humorous elements in the past, but Layton vs. Wright takes it to a new level for the two franchises while still being affectionate with its main characters. On Layton’s puzzle-game side, you’re rewarded with dialogue chains as you hunt for hint coins to give you a leg up on the puzzles. Some of the dialogue pokes gentle fun at you, for your dogged hint coin hunting.

Wooden crates, nothing to see here, one character tells another as you click, looking for a coin. You click again. Wait! I see a scorpion! You click again. Never mind, it’s just a piece of wood.

Layton plays it mostly straight throughout the game, as he’s almost always fully aware of what’s going on in the moment, even if he doesn’t yet know the big picture. Wright is not always fully aware of his situation, which adds enormously to the humor. His confusion allows the title to poke fun at his core features (that pointy hair, that habit of pointing and yelling) without making light of his real abilities.

That’s … a lot of reading

You know any 3DS game that comes with the tag “deep storyline” is going to come with lots of dialogue. Lots and lots and lots of dialogue in the case of Layton vs. Wright. You’ll eventually find yourself madly tapping to get through the comments and back to the action, especially in the beginning. With voice acting this good, you almost feel guilty for speeding through it.

That balance becomes better later in the experience, so hang in there.

The challenges that aren’t that challenging

You won’t find Layton’s best brain-bending puzzles or Wright’s best twisty courtroom challenges here, as noted above. Even if they were in this adventure, the abundant hints (and the fact that this game has been out overseas for months, meaning dozens of walkthroughs are available online) would make them trivial.

Yes, you’ll still feel smart, but if you’re looking for the kind of gameplay that sets your brain to smoking, you’re better off with the individual franchises. Try Professor Layton and the Unwound Future or Phoenix Wright Ace Attorney: Trials and Tribulations. 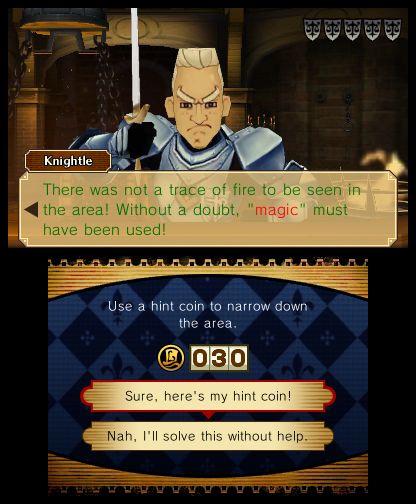 Above: Hint coins during cross-examination: as crossover as the gameplay gets.

Gameplay styles that don’t cross over

Layton and Wright interact. And you can use hint coins for both puzzles and court. Yet, almost no real crossover exists in the gameplay.

Think of this as the peanut butter cup of mashups. We’re not mixing the chocolate and the peanut butter. We’re putting them next to each other, and you’re going to love them. The title switches between puzzle solving and exploration phases with Layton and trial phases with Wright.

While both are satisfying, this means if you don’t like puzzles or hate the courtroom cross-examinations, you’ll be mashing through those scenes trying to get back to the things you love. Stick with the individual game series instead in that case.

Professor Layton vs. Phoenix Wright: Ace Attorney is an extremely satisfying pairing — if not actually a blend — of the puzzle solving and courtroom twists from the two series. The game’s high production values add charm and character to the experience. The compelling storyline and animation make up for dialogue that might linger a little too long and puzzles that might speed by a little too quickly. If you like both nonviolent handheld heroes, “Take That” copy of Layton vs. Wright, without hesitation.

Professor Layton vs. Phoenix Wright: Ace Attorney is available Aug. 29 on Nintendo 3DS for $29.99. The developer provided GamesBeat with a free download code for this review.