Nokia may be a dinosaur of the smartphone world, but the Finnish company has been pushing its technology smarts in other verticals recently — one of which is the Ozo virtual reality (VR) camera. 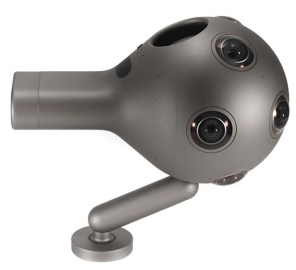 But today, Nokia has announced that it’s extending sales to a triumvirate of third-party sellers — OffHollywood, Radiant Images, and AbelCine — in a deal that will also see the camera offered on a weekly or monthly rental basis. This could prove key to the camera’s success, given that VR is still a fledgling medium and many companies simply won’t want to risk $60,000 on something that is still in its infancy. Nokia also confirmed to VentureBeat that Ozo orders placed through its own site on preorder will be shipping imminently.

While Nokia hasn’t ruled out a return to smartphones after it sold its mobile phone division to Microsoft for $7 billion, it’s clear that it could be a long road back — one involving many partnerships and licensing agreements. Since offloading its Here mapping unit, Nokia has consisted of Nokia Networks, a broadband network infrastructure business; and Nokia Technologies, a division that will aim to keep the brand alive in the public realm — and it’s this arm that’s behind the Ozo VR camera.

“AbelCine, OffHollywood, and Radiant Images are vital to helping Ozo reach the professional VR creation audience, especially in the primary markets they play in,” said Guido Voltolina, head of presence capture at Nokia Technologies. “We have carefully selected these first three partners because of their expertise in the space, their relationships with our core customers and their affinity with our vision for VR.”

It has become increasingly clear that VR is the hot technology trend of 2016 — it was the talk of the town at Mobile World Congress (MWC) last month, while we’ve recently seen the opening of VR roller coasters and even a VR movie theater. With all these new experiences entering the VR fray, in addition to gaming, what we need now is content — and with the Ozo, Nokia is betting that this trend we’re seeing continues.

None of the three companies have publicized their weekly or monthly rental rates, though it appears that quotes will be given based on individual needs and any additional equipment they may need. In other words, the prices may vary — we’ve reached out to the companies and will update here if or when we receive any clarification on this.