THQ died a few years ago, but now it’s coming back. Nordic Games acquired the rights to the name and THQ’s library of titles, and it is rebranding itself today as THQ Nordic.

The Vienna, Austria-based video game publisher acquired the rights to THQ’s assets in 2013, after the legendary Los Angeles publisher of games such as Darksiders and Red Faction was liquidated in a bankruptcy sale. Since that time, Nordic Games has been working out what to do with those properties, and it is taking its first step toward rebranding ahead of the Gamescom game event in Cologne, Germany.

Nordic Games started in Sweden in 2008 as a mini-venture to self-publish such games such as Dance Party Club Hits, Kart Racer, and Truck Racer on the PlayStation 2 and Nintendo Wii. The following year, the company published We Sing, a million-plus selling karaoke franchise for the Nintendo Wii. In 2011, Nordic Games began its transformation from small scale, two-platform games publisher to a multi-platform, multi-genre global player.

In a hilarious press release, founder and CEO Lars Wingefors said, “One could say the most defining moment for our company happened in 2013, grabbing headlines like; ‘Who the FUCK is Nordic Games?’, ‘Darksiders Gets Bought By…Nordic Games?’ and ‘Nordic Games explains who the f they are, plans for THQ assets.'” 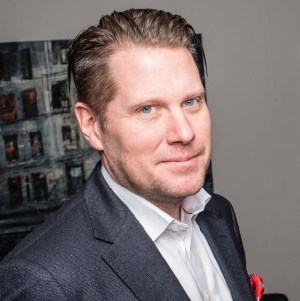 He added, “Funny enough, back then, this was so true. Until that point, we had been a low profile publisher uttering expletives of our own along the way, and all of a sudden we found ourselves in the international gaming media spotlight. We knew then, with great certainty, that we’d just made the best deal in our company´s history.”

Since 2008, Nordic Games has acquired 16 different individual intellectual properties and franchises in the game business. It now has a catalog of more than 250 actively sold games, more than 60 trademarks, hundreds of web domains, and a few patents for hardware and software. 61 game development projects were initiated and have launched. The company has offices in both Vienna and Karlstad, Sweden.

The company has created 82 jobs, not counting external development teams that bring the number to 325. Nordic games has set up studios in Phoenix, Ariz., and Munich, Germany.

“Whilst we take great pride in our Swedish roots and accomplished a great deal under the NordicGames masthead,” Wingefors said, “We decided it was time to incorporate the THQ name. Those key brands will continue to shape our business in a meaningful way going forward, and THQ Nordic represents a core approach of doing much more than ‘owning’ a highly competitive portfolio of IP. We cherish them, and align them with the very best development resources to expand upon them with the level of experience that communities and established fan bases expect and deserve. Side note – another upside to this whole rebrand thing is we don’t get asked about the Nordic Game parties at Gamescom anymore – it was the other guys who threw them.”

He added, “With this rebrand we are entering the next phase in our company’s evolution. As of now we have 23 game projects in development, 13 thereof have not yet been publicly announced, but are sure to be in the next months. Needless to say, the majority of these projects are based on former THQ owned IPs and franchises.”

Wingefors said, “THQ Nordic is meant to represent a core approach of doing much more than “owning” a highly competitive portfolio of IP. It revolves around cherishing them, and aligning them with the very best development resources to expand upon them with the level of experience that communities and established fan bases expect and deserve.”

Asked why Nordic Games saw value in the THQ brand name, Wingefors wrote in an email to GamesBeat, “We agree that the real value for consumers lies in individual game brands such as Darksiders, Red Faction, and MX vs ATV. Since the acquisition, however, we’ve of course monitored the chatter surrounding these brands among consumers and media and the THQ name remains closely tied to those great gaming brands. On a personal note, having worked in the industry since 1993, I have a lot of respect for what THQ accomplished in the video game marketplace. Their licensed and eventually hardcore games portfolio provided a lot of fun to millions of players, including me.”

Wingefors said it wasn’t much work to change the name, and he said, “After news of our THQ catalogue acquisitions hit and nobody — and I mean NOBODY — knew who we were, we figured it behooved us to buy a trademark with at least a little more awareness. Lo and behold, THQ was up for grabs! At the time, we thought we might publish certain games under the THQ label. Obviously that initial strategy changed.”

He said, “The THQ Nordic brand is a combination of our Scandinavian and Austrian roots and our ongoing strategy to make great games and deals. Our philosophy behind continuing to expand upon the THQ Nordic brand starts with fun games – that’s what attracted us to the THQ catalog. Look at Darksiders, as an example. It’s been a few years since the release of Darksiders II and that growing community remains very active — very hungry — for what will come next. THQ Nordic very much looks forward to satiating gamers’ appetites in the months and years to come.”