The report from Palo Alto, Calif.-based Liftoff is based on 7.9 billion ad impressions and 3.6 million app installs, and it verifies that North America is still the king when it comes to generating revenues in the $36 billion mobile game industry..

Liftoff works with a range of mobile gaming companies including Storm8, Wooga, and InfiApps. Based on an analysis of impressions and downloads collected between October 2015 and October 2016 from more than 180 global gaming apps, Liftoff’s report found that 11.96 percent of users in North America who installed a gaming app went on to complete an in-app purchase.

Purchasing behavior varies widely by geography. These differences are staggering considering the fact that China alone had 366 million mobile gamers during the first half of 2015. That’s more than the entire U.S. and Canadian populations.

But North Americans are more willing to shell out money. This suggests that if mobile marketers want to optimize their business and better engage users, they should focus on quality over quantity — and that means directing efforts to North America. 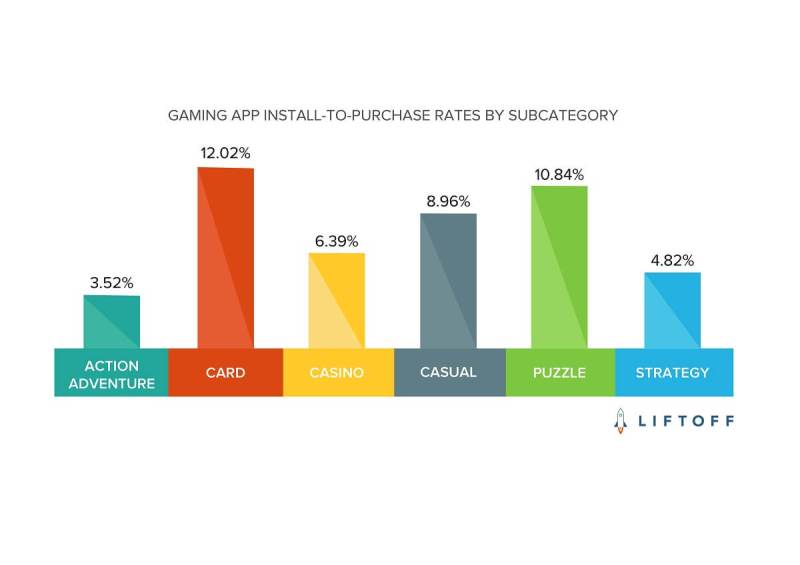 Above: Card games monetize well compared to other categories.

“As we expand our business into APAC, we’re interested to see how mobile engagement varies in regions across the globe,” said Mark Ellis, Liftoff’s CEO, in a statement. “Only by analyzing in-app behavior throughout the world can marketers truly understand how to target the best users and get the most value out of their marketing spend.”

A lot depends on the type of game. Mobile card game players are 241 percent more likely to purchase in-app than action-adventure players.

There are also surprising contrasts between gaming app subcategories, specifically those that differ in ease of gameplay. You might think that the level of involvement required by action-adventure games — with gameplay that emphasizes problem-solving and draws from a complex storyline — would result in the most engaged users. 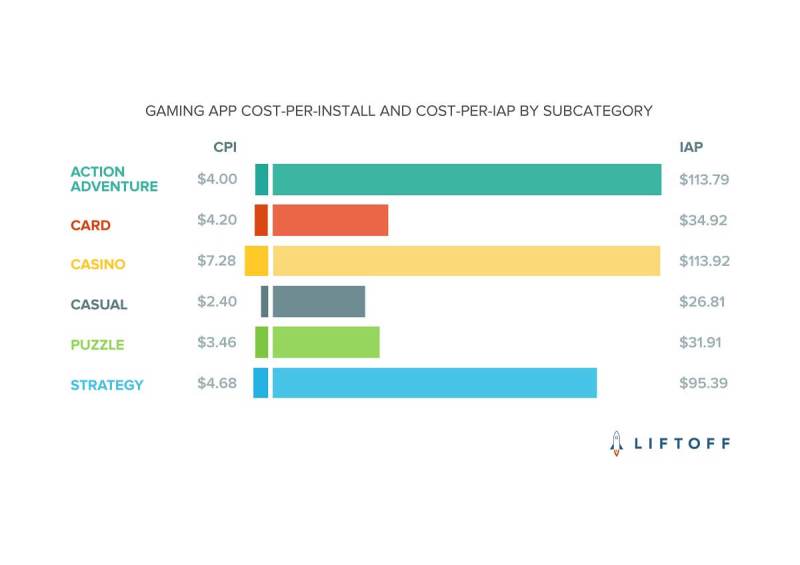 Above: Gaming app cost per install.

But Liftoff’s data suggests the opposite: Mobile card gamers are nearly 3.5 times more likely to make an in-app purchase than those that play action-adventure games.

While the reasons behind increased user engagement in mobile card games are unclear, one possibility is that simple rules and straightforward gameplay often result in increased overall play and frequency of in-app purchases. Whatever the cause, there is ample evidence that marketers can wring high value out of card game players, the report said.

Historically, men have been stereotyped as gamers while women tend to be linked to commerce. But when it comes to mobile, Liftoff’s data tells another story: According to the report, women beat out men in gaming app engagement.

While it may initially be less expensive to acquire male players, the extra effort to acquire female players pays off in the end as women lead in registrations and in-app purchases. That makes them more cost-effective to acquire overall. 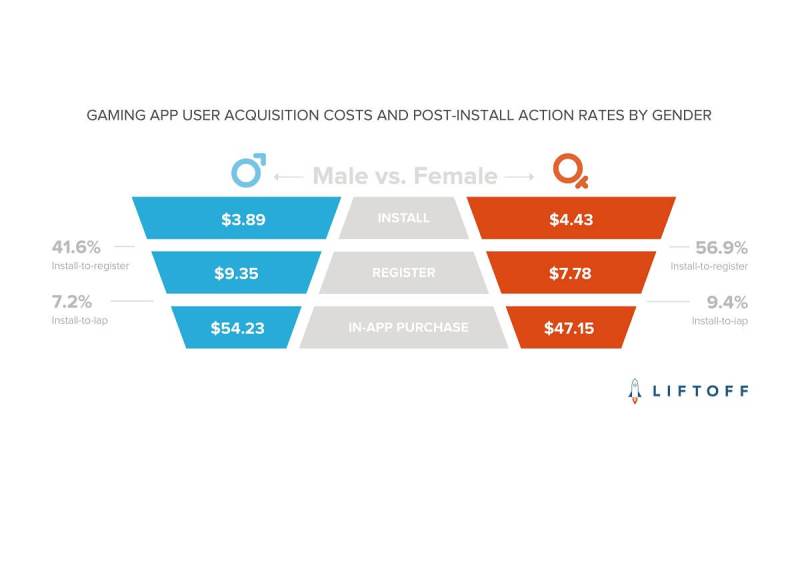 Above: Women spend more than men in mobile games.

The overall conversion rate for gaming apps is above average compared to other app categories.
The data shows that the average install-to-purchase rate for mobile games was above 8 percent, which is higher than other common app categories, including shopping, finance, and utility.

In 2015, mobile games generated approximately 85 percent of the total mobile app market revenue — or $34.8 billion worldwide. Liftoff’s data confirms that games continue to account for the lion’s share of revenue on mobile, scoring them the top spot on the app leaderboard.