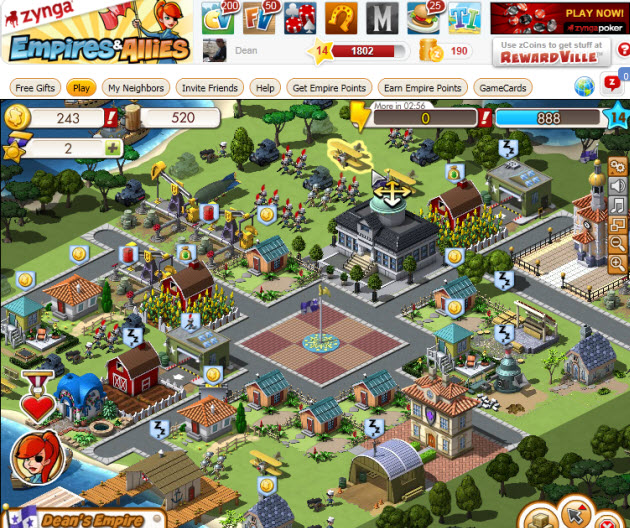 This kind of rapid growth is becoming normal for every new Zynga game launch. That’s going to make it easier for Zynga to go public, if it actually files for an initial public offering, as rumored. Public markets like predictable performance, and Zynga can churn out the hits because it uses its older games to promote its new ones. The company has become a Facebook distribution powerhouse. That makes it a lot easier for Zynga to generate revenue, since a percentage of users usually pays for items in otherwise free games.

Ho hum. What else is new? For Zynga, this kind of spectacular growth is becoming the norm. Empires & Allies is one of the fastest-growing games in history. But before that, Zynga’s CityVille, which still has 90 million users on Facebook, saw similar spectacular growth. And before that, Zynga’s FarmVille, which has 42 million users, was the darling game. Empires & Allies is described as CityVille meets Risk. Just seven days, ago, Zynga had 249 million monthly active users on Facebook. Now it has 267 million. That shows you how fast Zynga can grow when it has a hit game.

I’ve been playing it since the start, on and off, and this one is starting to feel like a real game. I actually get a kick out of being attacked by friends and defending my empire. Already, in the short time I’ve been playing it, I’ve seen other players build huge cities at a far faster pace than I have.

This game was a deeper dive into actual gaming than Zynga has ever taking. The blending of combat and casual is a big risk for Zynga, since many of its fans are middle-aged women who may not be a natural target audience for a game where you lob an artillery round at a good friend. But so far, it looks like the bet is paying off.

Your job in the single-player campaign is to rebuild your forces and take a total of 15 islands. You can enlist your friends to help you along the way. I haven’t event expanded beyond one island yet after a few weeks of very casual play.