The mobile gaming world is incredibly dynamic, and that is clear from a glance at the November game download data collected by market researcher AppAnnie. 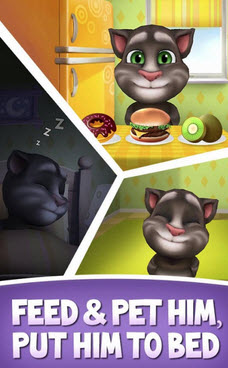 Above: Outfit 7’s My Talking Tom.

Consider, for instance, the battle among the “big three.” I could be referring to just about any game or publisher. But in this case, it’s the stamina of three games that have stayed at the top of the charts for a year: GungHo Entertainment’s Puzzle & Dragons, King’s Candy Crush Saga, and Supercell’s Clash of Clans.

For instance, France’s Gameloft rose to No. 1 in monthly iOS game downloads for the first time since July, as it had four titles in the top ten: Despicable Me, Thor: The Dark World, GT Racing 2, and Tank Battles.

China has also broken into the top ranks. China’s Tencent saw its WeRun title on the WeChat mobile messaging platform come in at No. 8 on the top iOS monthly revenue list.

Meanwhile, games on Japan’s Line and South Korea’s Kakao mobile messaging networks are still hot. Two Kakao games made it into the top 10 Google Play list in terms of monthly revenue, while Line had one title on that list. Line is now a top five mobile game publisher, just a year after the launch of its mobile gaming platform. It has had 220 million downloads in its first year.

And AppAnnie said that children’s game saw a resurgence. After a brief slowdown following the summer break, children’s game publishers rose in the November top downloads list. Chinese publisher Tiny Piece hit No. 1 in Google Play game downloads and Ireland’s Bluebear moved into the No. 6 position in iOS game downloads. Both companies are making children’s titles around fashion, salons, and fun science.

Electronic Arts had a strong showing on Google Play with the release in late October of Plants vs. Zombies 2. Sequels have started to make their mark. Among the top games were the sequels: Plants vs. Zombies, My Talking Tom, NinJump Rooftops, Asphalt 8 Airborne, and GT Racing 2.