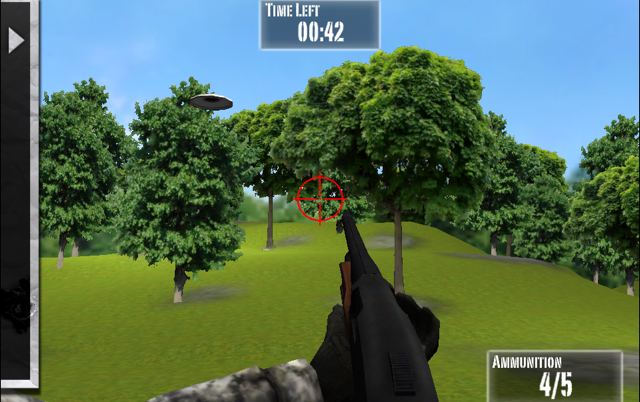 The NRA is an organization of lying hypocrites.

That was my first reaction upon seeing that the 501(c) organization had released an iOS shooter app in the wake of its own comments regarding violent video games.

But the finished product, NRA: Practice Range (by MEDL Mobile), is little more than a crude bait-and-switch (much like this article’s first sentence).

NRA: Practice Range touts its educational benefits on the front page (of the iTunes site, anyhow). But it dresses this “edutainment” in the guise of a low-rent shooting game that serves as the proverbial “bait.”

One minor confession: I’m a gun owner and a supporter of the 2nd Amendment. I love taking my Smith & Wesson 1911 .45 to the local range. And the app’s gameplay won’t win any awards … to put it kindly. “Infuriating” would be a good way to describe NRA: Practice Range’s gyroscopic shooting action (the analog mode improves matters slightly).

I’m not concerned here with the morality of firearms or the objective or artistic merits of the app itself. I’m more interested in analyzing the app’s purpose (or lack thereof) when juxtaposed with NRA President Wayne LaPierre’s statement that “vicious, violent video games with names like ‘Bulletstorm,’ ‘Grand Theft Auto,’ ‘Mortal Kombat’ and ‘Splatterhouse” led – in part – to the Sandy Hook shooting.” 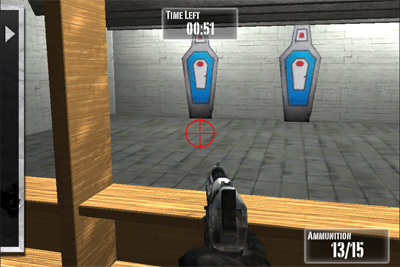 The game portion of NRA: Practice Range places you in an indoor range, outdoor range, or skeet shooting and tasks you with mowing down targets with an assortment of weaponry ranging from an M9 to an M16. And that’s about it.

Each mode offers one free weapon (you may purchase additional guns for $.99). The gameplay – via gyroscopic or analog controls – is repetitive and downright annoying.

But the raison d’etre of NRA: Practice Range is the “Facts” and “Gun Safety Tips” that display during loading screens – much like the historical facts and quotes in a Call of Duty or Medal of Honor title.

Some of these “Tips” – like “Never use alcohol or drugs before or while shooting” – seem simple to the point of pandering. Others – like “Always keep your finger off the trigger until ready to shoot” – aren’t so readily obvious to those weaned on Hollywood’s lax depiction of gun safety.

These are all useful links and – for the novice shooter – afford a great primer on the basics of gun ownership and pertinent background info. And most of the “Facts” and “Gun Safety Tips” are at least somewhat illuminating (though anyone who’s picked up a firearm in their life should have internalized most of them already).

But I question the existence of the shooting game. With its derivative gameplay, what purpose does it serve other than a bait-and-switch for the educational portion of NRA: Practice Range? I’d have no problem with an app that educates about responsible gun ownership – but then, the “game” segment is right there in the app’s title. It’s fundamentally dishonest.

And what is the purpose of the shooting game? I can’t picture anyone tolerating the infuriating gameplay for longer than 5 or 10 minutes. And coming from an organization dubbed the National Rifle Association – dedicated to educating the populace on firearms and their responsible operation — NRA: Practice Range is surprisingly light on gun-related details.

To its credit, NRA: Practice Range gets some minuscule details right. For example, the M16 only fires in semiauto mode (civilian AR-15 models don’t reach full-auto). But at its core, the shooting game is simply point-and-shoot. You’re not shooting at living targets and your victims don’t spew blood and guts, so no one would (or should) accuse the NRA of hypocrisy for simultaneously criticizing violent video games and endorsing an app like this.

But the game portion of NRA: Practice Range serves little to no purpose. Unlike the popular iOS shooting App, i-Gun by Vanilla Breeze, you won’t even learn the proper way to load a weapon and cock the hammer (for revolvers) or rack the slide (for semiautomatic pistols). It won’t familiarize you with the basic layout of a range (mainly because you won’t have the patience to play for more than 5 minutes), and you won’t learn anything about the real crux of firearms – the wood and metal of the firearms, themselves.

NRA: Practice Range isn’t hypocritical. And unlike some of my contemporaries, I see no problem with teaching responsible gun ownership to young shooters (though the iTunes site, in fact, rates it “12+”, which clashes with earlier reports). But the app serves little purpose, the game portion is a transparent bait-and-switch, and interested parties would do better to browse www.nra.org for pertinent info.