Graphics chip maker Nvidia is barging into the battle for the living room with a high-performance machine that will challenge both console makers like Sony and Microsoft as well as set-top box vendors like Amazon.

The company announced today its Shield Android TV Console for gamers at a press conference at the Game Developers Conference in San Francisco. The machine is expected to come out in May with a couple of options for cloud-gaming subscriptions.

It’s a small Android TV OS set-top device with a powerful Tegra X1 processor, but Nvidia believes its $200 box is just the right thing to squeeze in between the $100 Internet set-top boxes (Like Amazon and Android TV) and the more expensive dedicated video game consoles. If Nvidia has targeted right, it could carve out a chunk of the market for living room hardware that is now split between the set-top box makers and game console companies — a market that hit $67 billion in 2014, according to market researcher Jon Peddie Research.

The machine provides entertainment for the whole family, not just gamers, as it delivers video, music, and apps as well as controller-based Android games. It can display 4K video and games at 60 frames per second on televisions. The Shield Android TV Console works with an Nvidia Shield Controller as well as the Shield Tablet. You can also purchase a TV remote control separately to give voice commands to the box. If you add it all up, it’s about delivering both gaming and broader entertainment to the gamer and the gamer’s whole family, for a price that costs less than most other consoles.

“We worked on this for more than five years, and we tried to take whatever technology we invented to the market as soon as we could,” said Jen-Hsun Huang, chief executive of Nvidia, at an interview with GamesBeat at Nvidia’s headquarters in Santa Clara, Calif. “It’s an incredible way to bring awesome gaming to your TV, and it can broaden the reach of games. This is about gaming for everybody else. We are doing for gaming what Netflix has done for movies.”

On stage at an event at San Francisco’s Nob Hill Masonic Center, Huang showed off the Nvidia Shield set-top console playing Grid2, a fast-action racing game on a big screen. The racing action was fast, and there were no dropped frames in the demo. 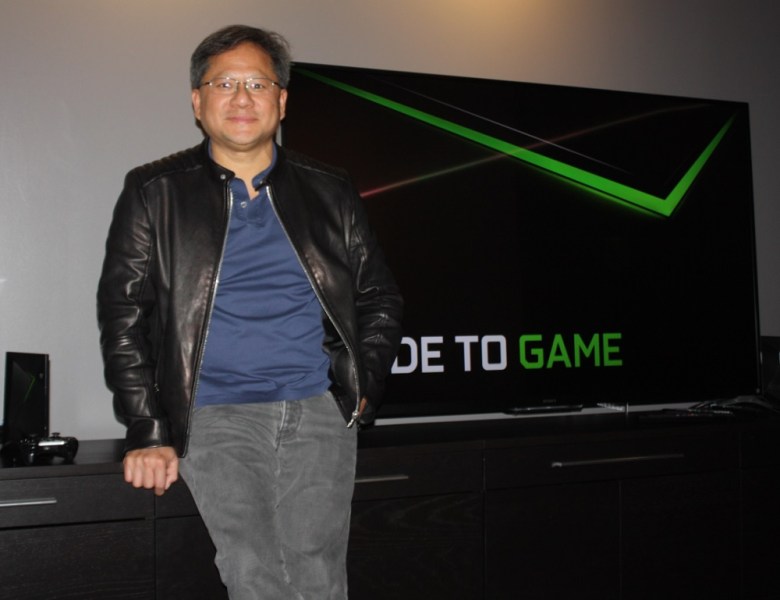 Above: Nvidia CEO Jen-Hsun Huang with the Shield Set-Top Console.

The challenge for Nvidia is that it is entering a crowded market at a relatively late stage. Sony, Microsoft, and Nintendo have their next-generation consoles in the market. Valve is about to launch a number of Steam Machines with its partners in hardware manufacturing. Razer is launching its own cloud-based Forge TV Android set-top box, which will stream games via the cloud. Amazon also has its own Amazon TV set-top box that can play games.

Nvidia is positioning its box at the high end of set-top boxes because of it can play triple-A, first-run games, Huang said. The system will have more than 200 Android games that work with the Shield Controller. Those games are available for download via an Internet connection from Nvidia’s own app store. But players will also be able to play games that are stored and executed in the cloud, or Internet-connected data centers.

“You can play games instantly in our store without going to a physical store or waiting for a massive download,” Wuebbling said. “You can pause the game and pick up where you left off.”

The Tegra X1 processor, which Nvidia announced in January, has 256 processing cores, and it is based on Nvidia’s state-of-the-art Maxwell architecture for graphics processing. It’s a “desktop class GPU,” Huang said. The set-top box will be available in the next few months.

The cloud games are part of a subscription service dubbed the Nvidia Grid game-streaming service. In contrast to earlier cloud gaming offerings, Nvidia is offering higher quality, high-end games via the cloud. If a user has a 30 megabit-per-second cable modem Internet service, they can then play games in 1080p (high-definition) resolution at a full 60 frames per second. Other services offer 720p quality, often at 30 frames per second. The better quality will enable Nvidia to offer high-end PC games to players such as Warner Bros.’ Dying Light. Grid will initially start with more than 50 cloud games.

Kevin Krewell, analyst at Tirias Research, said that Nvidia has positioned the set-top and cloud service well, in between the set-top boxes and the high-end game consoles and gaming PCs. 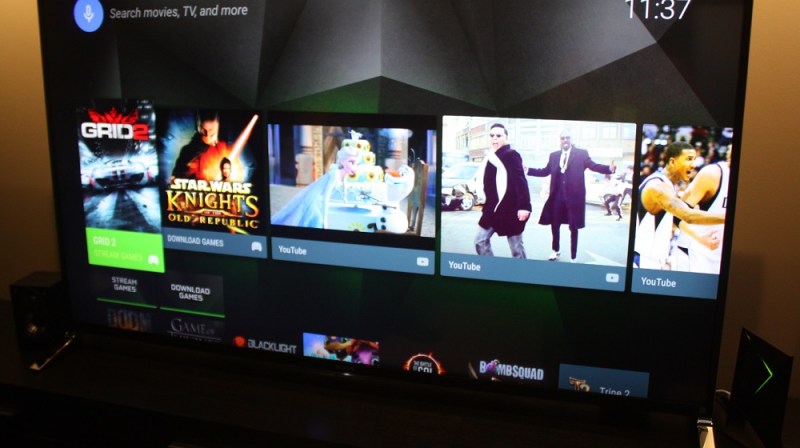 Matt Wuebbling, the director of Shield marketing at Nvidia, said in an interview that Nvidia is able to do this because it has outfitted its data centers with supercomputers that have Nvidia GeForce GTX graphics processing units (GPUs). Thanks to that heavy-duty, virtualized GPU infrastructure, Nvidia believes that its cloud games deliver an experience that is just as good as disc-based games.

“It’s a supercomputer at your fingertips,” Wuebbling said. “It combines a lot of Nvidia technology into one experience.”

I saw a demo of the cloud games, and I couldn’t tell them apart from disc-based PC or console games. It was an instantaneous experience.

It’s difficult to deliver 1080p gaming over the cloud, but I didn’t notice any flaws such as dropped frames. For those who have a 10 megabit-per-second Internet connection, Nvidia will offer 720p games via the Nvidia Grid game-streaming service. At the higher quality level, Nvidia will be able to offer games such as Street Fighter Ultra IV (which I played in fast-action matches), Crysis 3, and Doom 3: BFG Edition. In fact, I didn’t even realize I was playing Dying Light in the cloud, rather than on the set-top box itself.

“This is in the cloud,” Wuebbling said. 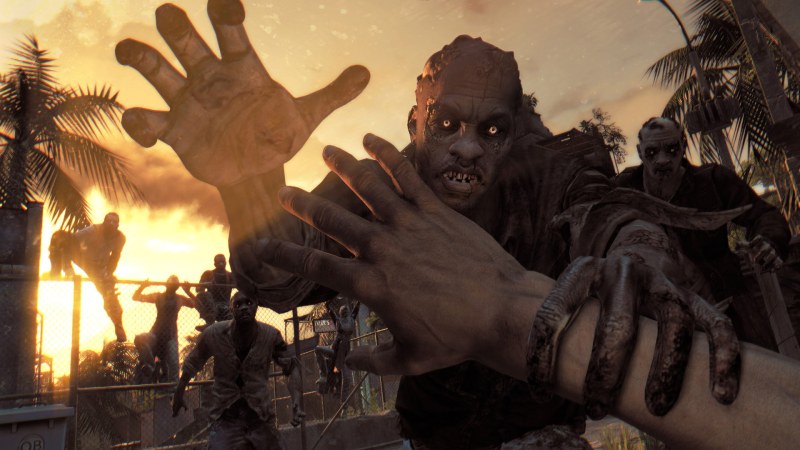 That’s the difference between the Nvidia Grid game-streaming service and early cloud-gaming applications, Wuebbling said. The capability to run Crysis 3 shows that the Shield set-top box can offer high-end PC games that no other Android set-top box can, said Andrew Coonrad, the technical marketing manager at Nvidia. Because the Crysis Engine is natively ported to the Shield set-top, the Nvidia box will be able to run just about any game built with Crytek’s high-end Cry Engine.

As for movies, the Shield set-top box can stream them at 4K resolution, or twice as many pixels as 1080p HD. The Android TV gives you access to services such as Netflix, Hulu Plus, Vevo, Red Bull TV, YouTube, and many others. Some apps are missing, such as HBO Go, which you can get on the Xbox One via Xbox Live if you have a subscription to that network. 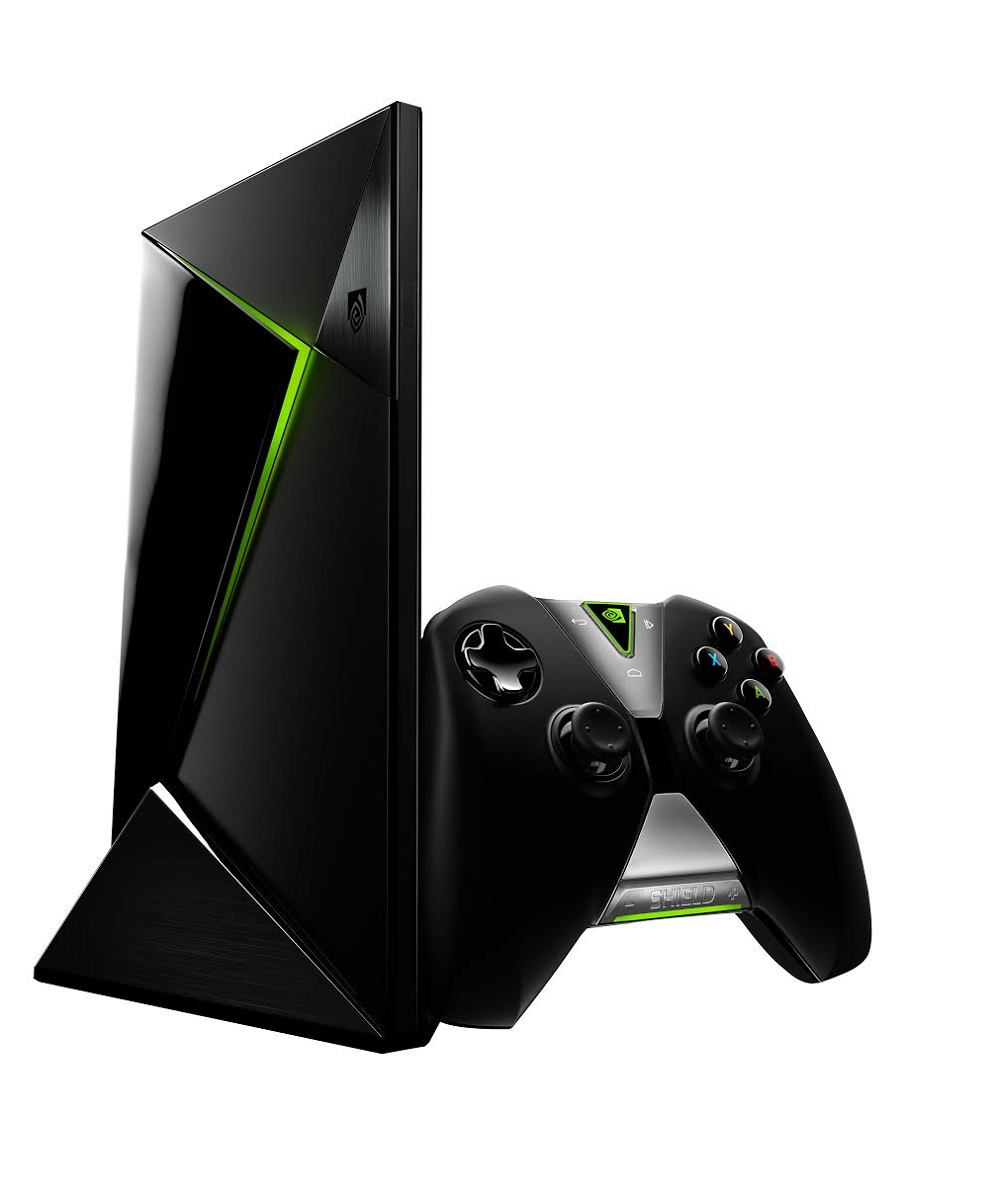 Above: Nvidia’s set-top box for gamers.

You can also use a separately purchased remote control to navigate through the video menu. And you can use Android TV’s Google Voice Search feature to search for movies using voice commands. You can use the Android TV voice-recognition feature to speak voice commands to the set-top box. You can do Google searches with voice commands, and you get recommendations based on your gaming history. It has Google Chromecast built into it, so you can display the screen of your Nvidia Shield Tablet to the big-screen TV via Chromecast. You can also stream a game from the Steam digital distribution network and community from a GeForce-based gaming PC to the TV using the Shield set-top box.

The machine itself is smaller than a laptop computer. It is a glossy black box topped by a pitched green chevron. It plugs into a TV’s HDMI port and has Wi-Fi, Ethernet, and Bluetooth connectivity. The high-end processing power distinguishes the Shield set-top box from other Android TV set-top boxes. The box has HDMI 2.0 and USB 3.0 connectors. It supports 5.1 and 7.1 audio via HDMI.

The box has 3GB RAM and 16GB of flash memory. It has no hard disk drive. If you want to expand the flash memory, you can purchase your own SD card (up to 128GB) and add it via a microSD slot. The device measures 8 inches by 5 inches by 1 inch. It weighs 23 ounces.

“This product is self-contained,” Huang said.

Huang said it took five years to make this because Nvidia had to create a GPU that was energy-efficient so that it could cost-effectively process games in the cloud.

“We had to build a virtualization stack for cloud to be able to offer the Grid service,” Huang said. “We had to build the Tegra X1 processor and get the right operating system.” 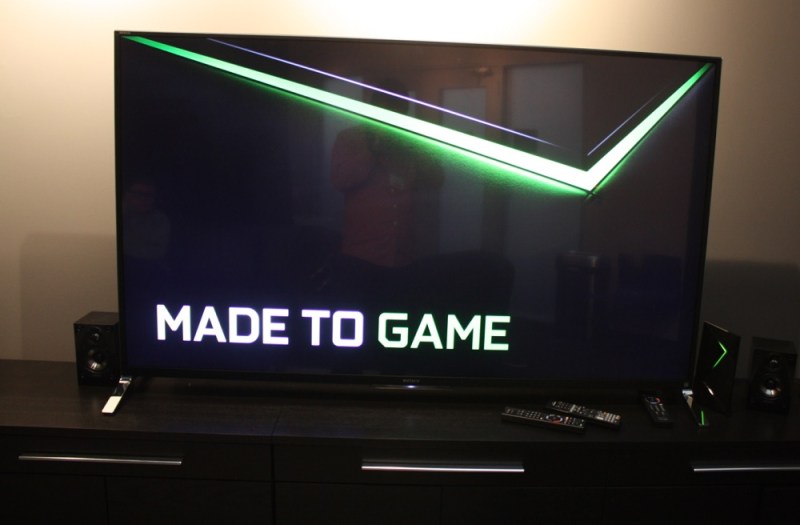 Above: Shield set-top box and a big-screen TV