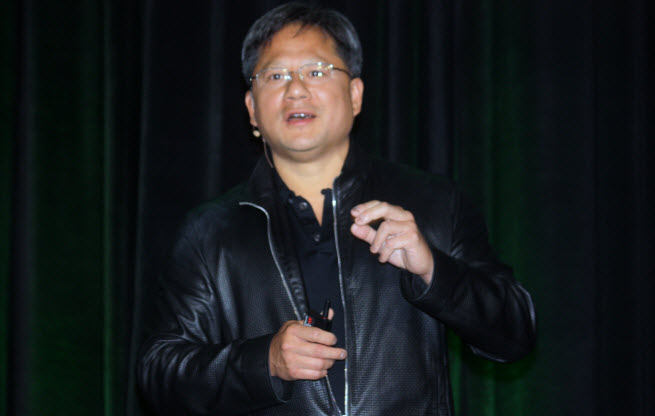 Nvidia chief executive Jen-Hsun Huang told analysts today just how important cloud graphics will be to the world. The company announced last week that its recently announced Kepler-based graphics chips are capable of cloud graphics. That means they can process graphics for multiple users in a data center and then dispatch the appropriate graphics as needed to the displays of distant remote users.

That allows big new applications for cloud computing in the enterprise. You can, for instance, use your own puny laptop to access huge visual projects such as engineering designs. Your computer will tap the graphics computing power in the cloud to render the images that your laptop could never display in real-time. One graphics processing unit (GPU) in the cloud can supply the graphics for at least four remote users today, compared to just one for prior chips. That makes cloud gaming and enterprise cloud graphics applications far more economical than in the past.

“Now we have a GPU for the cloud, a virtual GPU,” Huang said at Nvidia’s analyst day in Santa Clara, Calif. “What that means is that a whole bunch of users can see one GPU and use it as if it were their own.”

Nvidia has created a lot of software that enables the virtualized GPU, which can take graphics processing commands from a variety of users and process them on the GPU without regard for where those commands are coming from. No longer do the processing tasks have to come from just one computer.

This allows the graphics chip to catch up to the central processing unit, or CPU, which, when combined with hypervisor software originally created by IBM for sharing mainframe computers among many users, can serve many users from a single chip in a data center.

Huang said this cloud GPU will be valuable to the world’s 25 million product designers around the world. These users now buy Quadro-based graphics workstations in the millions each year. Power graphics users then make use of those designs and then share them. Other enterprise workers have to access high-end graphics, but in the enterprise, many of them don’t have beefy computers. Virtualization gets around that problem, so you can run high-end graphics applications on a device as simple as an iPad. Hundreds of millions of enterprise users could benefit from cloud graphics, Huang said.

“That is completely empowering,” Huang said.

The Nvidia technology can handle virtualization quickly. It doesn’t use a software layer, or emulation, because that approach is too slow. The hardware has been tweaked for virtual GPU tasks.

“We wanted to put this in the cloud and for the first time, a GPU needs to be aware that a display may not be directly connected to the GPU,” he said. “It could be anywhere in the world. You just tell the GPU an address, and the bits coming out of the chip are sent to that address” to display the graphics on a distant computer.

Huang demonstrated an iPad running Windows and other demanding PC graphics applications running on the cloud. The iPad was able to show a high-end design program displaying a photorealistic image of a car. A total of 1,536 Kepler cores were accessible to the iPad, so it could handle the computing task easily.

As far games, Nvidia wants to use cloud graphics to make games instantaneously convenient to play as TV shows. This taps a technology dubbed the GeForce Grid. You no longer have to download a big game for hours and have a powerful computer to play it. That’s similar to the vision that OnLive and Gaikai have, and both are partners with Nvidia in cloud graphics.

“This will do the same for video games what TV has done for video,” Huang said. “We think it could expand the market.”

Of course, high-end games that are played remotely could suffer from lag, where the inputs that a gamer makes aren’t immediately translated into actions in the game.  So serious gamers are playing online games on PCs, rather than consoles, since the delays on a high-end PC are about 65 milliseconds and they are 166 milliseconds on an online console.

With the GeForce Grid powered by Gaikai, Nvidia can reduce the lag of the cloud graphics games to 161 milliseconds, or essentially just as fast as a game console. That could enable large numbers of casual gamers and non-gamers to play high-end games on relatively simple computing devices, Huang said.

“For the game developer, we can expand their reach,” he said. “Today, you need to have the right hardware. But we can make it run on any hardware.”

On top of that, cloud-based games are piracy free, Huang said.