Nvidia CEO Jensen Huang has built Nvidia into the most valuable chip company in the U.S. It’s a pioneer in both graphics and artificial intelligence technology. And now the awards are catching up with him, as he was named one of Time magazine’s top 100 most influential people.

On November 18, he will also receive the chip industry’s highest honor, the Robert N. Noyce Award. These recognitions for Huang — as well as others who made Time’s list (Tesla founder Elon Musk and Apple CEO Tim Cook) — show how important the technologies that his company has built have become to the world.

“Artificial intelligence is transforming our world,” wrote computer scientist Andrew Ng in the story on Huang. “The software that enables computers to do things that once required human perception and judgment depends largely on hardware made possible by Jensen Huang.” 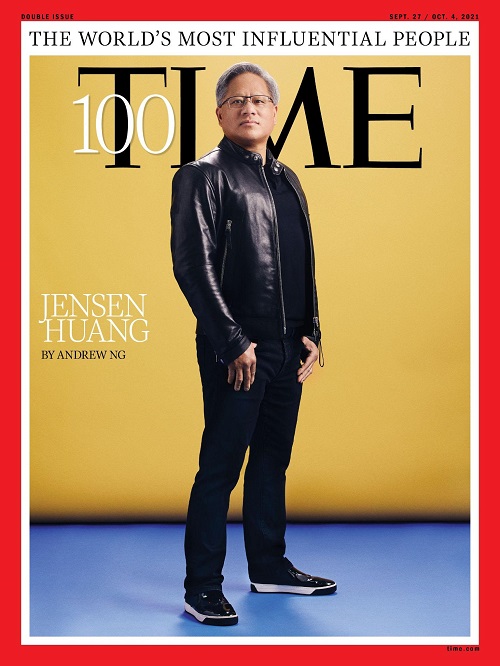 Huang founded Nvidia in 1993 and has served as CEO since its inception. (Huang showed me a demo of the company’s graphics chip and its “Windows accelerator” application. That was when I was at the San Jose Mercury News in 1995, and it was Huang’s first interview with the press).

The rapid innovations in 3D hardware for gaming were a big part of why it became the world’s largest entertainment industry. More recently, Nvidia tapped the parallel processing it used for its graphics processing units (GPUs) to do non-graphics compute tasks. That turned into a huge application in AI, where Nvidia’s chips are becoming the brains of computers, robots, and self-driving cars.

That relentless innovation has paid off. Nvidia is now worth $555 billion on the stock market and employs 20,000 people. Much of that growth came as Nvidia saw huge success in AI.

“Huang’s gamble paid off largely because he is among the world’s most technically savvy CEOs,” wrote Ng. “He’s also a compassionate steward of his employees and a generous supporter of education in science and technology. With still emerging AI technologies creating an insatiable hunger for more computation, Huang’s team is well-positioned to keep driving technological advances for decades to come.”

He also recently received a distinguished lifetime achievement award by the Asian American Engineer of the Year from the Chinese Institute of Engineers (CIE) group. Huang pointed out he was “destined to be an engineer,” as his father was an engineer in Taiwan. His brothers were engineers, and his wife, Lori, whom he met as a sophomore at Oregon State University, is also an engineer.