Nvidia is letting loose the first desktop PC graphics chips based on its new Maxwell architecture, the biggest overhaul since it launched its Kepler-based graphics processing unit (GPU) architecture in 2012.

The company says that these power-efficient chips will enable gamers to enjoy outstanding 3D graphics performance in PCs where the graphics cards cost a mere $100 to $150. In that sense, the Maxwell-based chips, formally known as the Nvidia GeForce GTX 750 Ti and the GeForce GTX 750, are high-definition graphics chips for the rest of us.

The Maxwell-based chips emphasize a blend of performance and low-power consumption, with a focus on a metric known as performance per watt. Scott Herkelman, general manager of GeForce for the desktop at Santa Clara, Calif.-based Nvidia, said in an interview with GamesBeat that the new GTX 750 Ti offers twice the performance per watt as older Kepler-based chips.

“We are investing heavily in the next-generation PC gaming sweet spot of $100 to $150,” Herkelman said. 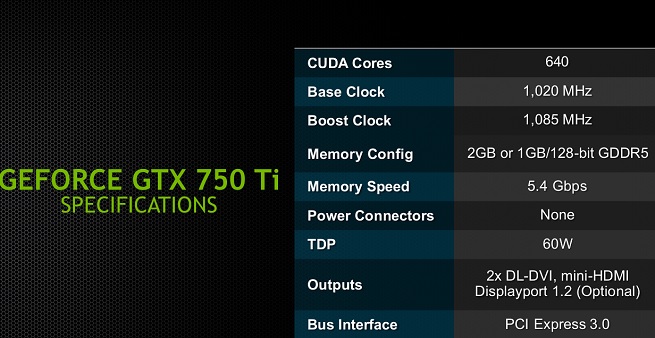 The new chips will enable smaller designs for PCs as they won’t require powerful fans or heat sinks. The GTX 750 Ti and GTX 750 consume 60 watts and 55 watts, respectively, or so little that a PC that uses them can run quietly. 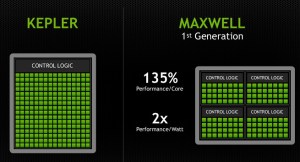 Above: Maxwell vs Kepler

The new chips include support for Nvidia’s GameWorks program, which includes the ShadowPlay game capture for broadcasting to Twitch; G-Sync, a display technology that smooths edges and avoids scenes where the screen “tears” because part of the animation can’t keep up with the rest of it; and GameStream, which lets gamers stream their titles to the Nvidia Shield handheld gaming system.

Herkelman said the competition in graphics is no longer just about providing raw performance. Rather, it’s about balancing power efficiency with performance so that new game systems are both powerful and affordable.

The chips are available now, with the GTX 750 selling for $119 and the GTX 750 Ti selling for $149. Add-in card suppliers include Asus, Colorful, EVGA, Gainward, Galaxy, Gigabyte, Innovision 3D, MSI, Palit, PNY, and Zotac.

Herkelman said the support for Twitch is important because players are broadcasting 12 billion minutes per month now. He said that Nvidia ShadowPlay users have captured 3 million videos to date.

In terms of architecture, Maxwell differs from Kepler because Nvidia was able to put more control logic among the cores within the chip for more fine-grained control of power consumption. Maxwell has twice the performance per watt as Kepler and 135 percent more performance per core. Compared to Fermi, which debuted four years ago, Maxwell is four times more efficient. Maxwell-based chips are built in the same 28-nanometer manufacturing process used to build Kepler-based chips. That means that a Maxwell-based GPU consumes only 60 watts, compared to 116 watts for a Fermi-based GPU.

“We used the learning from both Kepler and our mobile Tegra chips,” Herkelman said.

“It’s a fantastic architecture for performance per watt,” Herkelman said. 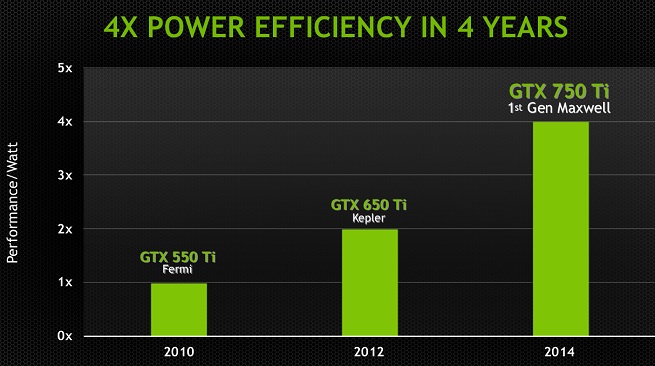