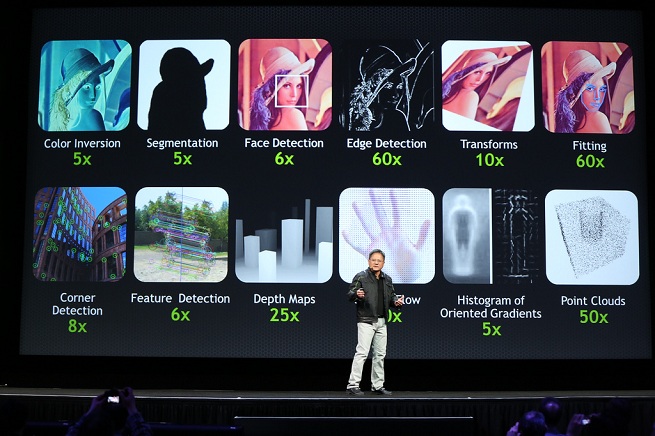 SAN JOSE, Calif. — Nvidia unveiled the next-generation chips in its roadmap for desktop computers and mobile devices today. And by 2015, those devices will be 100 times faster than they were in 2011.

Jen-Hsun Huang, the chief executive of Nvidia, made the announcements at its GPU Tech conference today in San Jose, Calif. He said that the company’s next-generation graphics core for desktop and high-end mobile computers will move from Kepler to Maxwell in 2014. By 2015, Nvidia will launch Volta, a chip that includes its first instance of Denver processing technology.

With Volta, Nvidia will move to 3D transistors and stacked memory, or memory chips on a circuit board that are stacked on top of each other.

Meanwhile, Nvidia is also refreshing its lineup of Tegra mobile processors for smartphones, tablets, and other power-efficient devices. Nvidia is currently shipping (or about to ship) its Tegra 4 mobile processors. By 2014, Nvidia will launch Logan, which will presumably be called Tegra 5, and it will launch Parker in 2015. From 2011 (with Tegra 2) to 2015 with Parker, Nvidia’s processing power in Tegra chips will have grown 100 times in performance. Normally, chip improvements would call for an eight-fold increase in performance.

“You’re not the only one who has been holding their breath for these chips,” Huang said in his keynote speech.