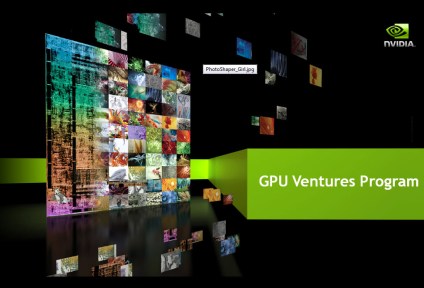 Nvidia is trying to stoke its own product ecosystem today as it launches the GPU Ventures Program to identify, support and in invest in early stage companies.

The investments will focus on GPU (graphics processing unit) applications such as video programs that tap the computing power of the graphics chip. Through Nvidia’s CUDA programming environment, the GPUs can now be used to handle non-graphics computing tasks and software companies are only just beginning to exploit that, said Jeff Herbst, vice president of business development at Nvidia.

The Santa Clara, Calif.-based graphics chip maker is extending a program it kicked off last year with its Nvision visual computing conference, which featured an investment conference that drew 60 startups.  Now the company has formalized its plans to invest in startups and to publicize them through a portal site, dubbed GPU Venture Zone. Nvidia offers more than just dollars. It lets some startups such as Elemental Technologies, whose Badaboom program converts video from one format to another, sell their wares on the Nvidia’s own web site or partner web sites.

Besides Elemental, Nvidia has invested in Keyhole, which was acquired by Google to create Google Earth. It also invested in Mental Images (and later acquired it) as well as MotionDSP and Right Hemisphere. Nvidia plans to do another Emerging Companies Summit in the fall of this year. Herbst is targeting companies developing CUDA software applications, as well as other sectors such as those making middleware tools for game companies.

While it’s not a great year to start something because of the economic turmoil, Herbst said that companies need Nvidia’s help more. He wants VCs to know that Nvidia is willing to co-invest, or sometimes be the only one to invest in a new company. Herbst said he continues to see more and more good startups. He acknowledged that the bad economy and Nvidia’s own losses are affecting his program some, in terms of the dollars available to invest, but he said the impact isn’t huge because the program is strategic to Nvidia’s future.

“This is about ecosystem development, and so we have decided to double down,” Herbst said.