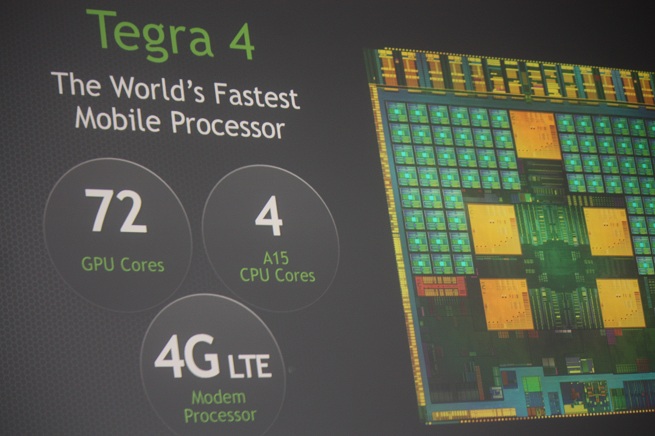 Nvidia announced its Tegra 4 mobile processor tonight at a press event at the Consumer Electronics Show in Las Vegas. The new chip will be at the heart of a next generation of smartphones and tablets that will be as powerful as laptops and personal computers from just a short time ago. 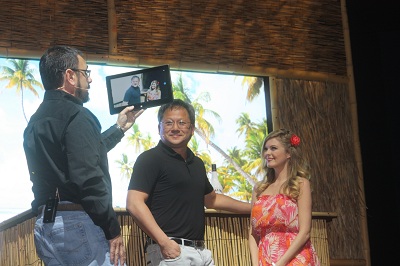 Jen-Hsun Huang, chief executive of Nvidia, said the chip is the fastest processor in the world for use in tablets and smartphones. The chip has 72 graphics cores and four microprocessor cores. It can process 4G LTE wireless signals and load web pages fast, he said in a press conference at the Rain nightclub in the Palms hotel tonight.

The new Tegra 4-based tablet could load a web page in 27 seconds, compared with 50 seconds for a Google Nexus 10 tablet, which uses a Samsung 5250 chip.

“Tegra 4 is the fastest application processor in the world today,” Huang said.

It is faster than Apple’s A6X processor in the new iPad when it comes to loading web sites, Huang said.

The chip also enables cool photo processing, such as high-dynamic range, where images with both dark and light parts come out clearly. Huang, pictured in the middle, right, demonstrated just how much better pictures with dark subjects in the foreground and bright objects in the background could look.

Tegra 4 is also part of the Project Shield mobile game console that Nvidia introduced this evening.