A few weeks back, I finally got around to reviewing a 17-inch MSI laptop with a built-in GeForce GTX 980 desktop graphics processing unit (GPU). Now, I’m running a 14-inch MSI notebook that is tiny compared to that older model — only it is just as powerful.

A new generation of laptops are starting to roll out that feature Nvidia’s 10-series cards built on the Pascal chip architecture. The company already unleashed the GTX Titan X, 1080, 1070, and 1060 in their desktop formats, but now manufacturers like MSI, Asus, and Razer are building the mobile versions of those chips into their gaming notebooks. Unlike previous GPUs, Pascal’s cool, energy-efficient 14-nanometer processors enable full desktop video cards to fit into a wide variety of portable PCs.

After a few days with one of these units, I keep thinking one thing: Pascal changes everything. 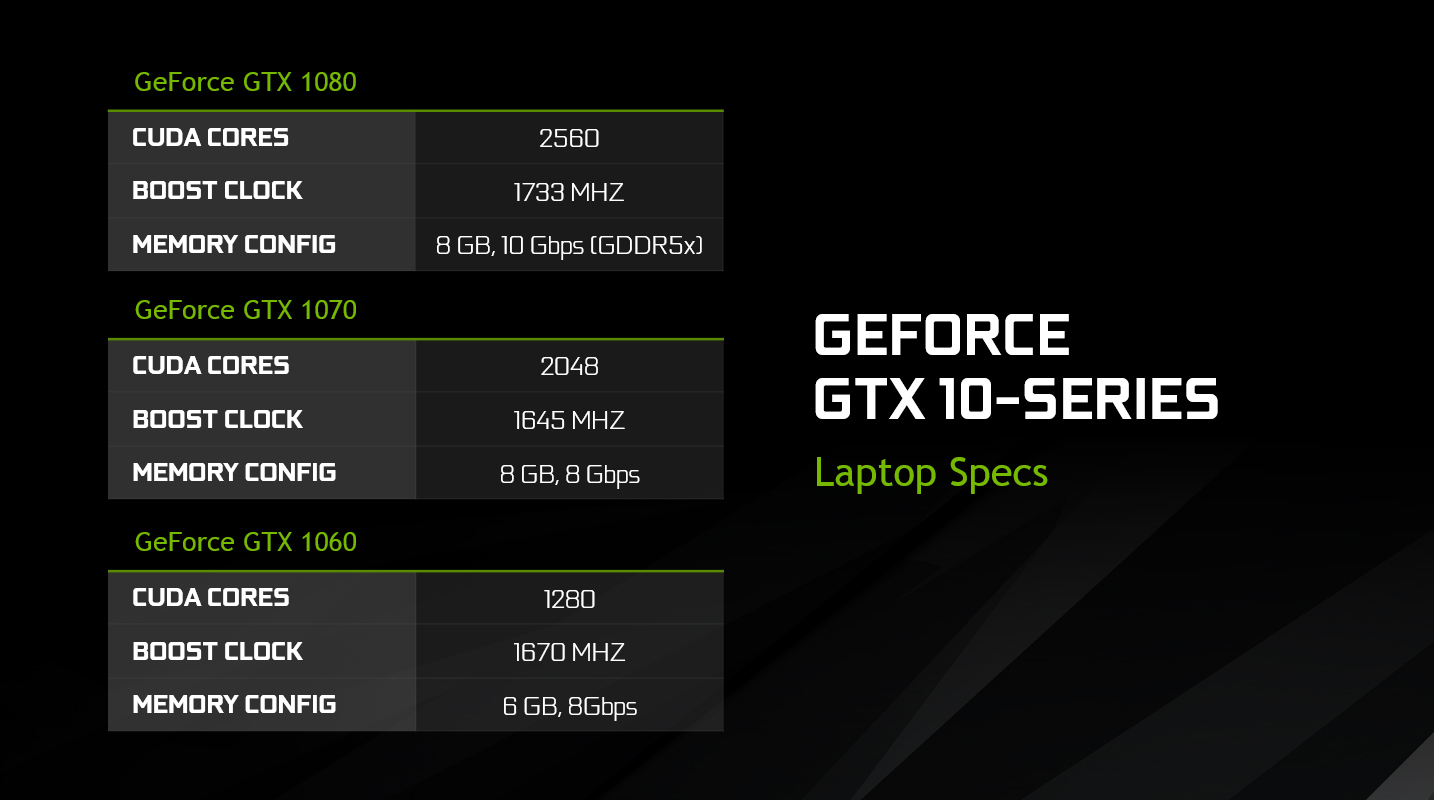 Above: The 10-series laptop chips are all nearly as powerful as their desktop cousins.

Gaming laptops have gained a bad reputation over the years primarily because you were often paying a premium for mobile graphics that were a year or two behind their desktop counterparts. I came around on that after experiencing the convenience of the enormous and expensive MSI GT72S. But now, the GS43VR has pushed me over the edge.

This latest device from MSI sells for $1,500, comes with a Core i7 and a GTX 1060, and it is infinitely sleeker than its predecessor.

Having a GTX 1060 connected to a full HD screen means that I now have a highly portable option for gaming at 1080p and 60 frames per second across almost any modern release. If you’re insane, you can even get a 4K behemoth in the MSI GT83VR Titan SLI. That beast puts two GTX 1080s into one 18-inch megalaptop that weighs more than 10 pounds.

The point here is that laptops can now do 1080p60 in a design that is comfortable and easy on the eyes, and it can do 4K resolution if you’re willing to carry around one of those portable desktops.

Finally, one of the biggest advances of Pascal and the 10-series cards is that anyone who buys one of these machines now has something that is capable of handling VR. This a crucial advancement for companies like Oculus VR, Valve, and HTC that have a lot invested in virtual reality. Moving forward, as people naturally upgrade their systems, it’s going to quickly get to a point where you’ll have a hard time getting a powerful laptop that can’t handle an Oculus Rift or HTC Vive headset. As kids start graduating this spring, many them might consider something like the GS43VR or the newest version of the Razer Blade.

And if you’re looking at a laptop, I would stop and make sure that you’re putting that money into a machine running an Nvidia Pascal chip or, potentially, AMD’s 14nm Polaris technology that will end up in laptops soon as well. These chips finally have us all in an era where gaming laptops are starting to make sense for most people.