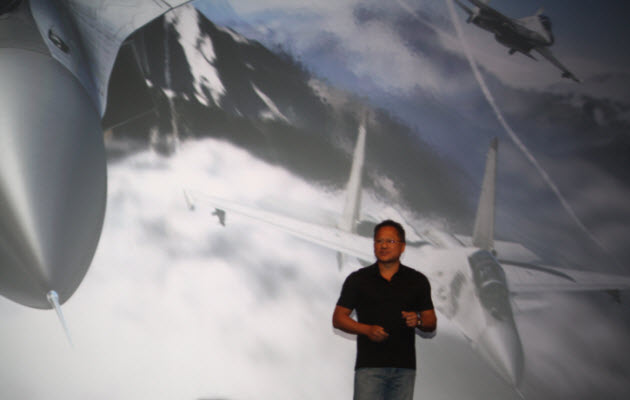 Amid a bunch of cool stereoscopic 3D demos, Nvidia announced today that it can run its graphics-based programming technology on any computer regardless of whether it uses an Nvidia graphics chip or not.

In short, Nvidia has worked with software company PGI to create a new compiler to take code for its graphics chips and run them on machines without its graphics chips. Before you dismiss this announcement as a narrow one, you have to realize that its programming technology, CUDA (Compute Unified Device Architecture), is part of Nvidia’s plan to steal more of the computing inside the computer for itself. It’s a platform technology that has been a big draw for those programming compute-intensive tasks, from sophisticated math computations to video encoding. The company has built an entire conference, the GPU Tech event in the San Jose Convention Center in San Jose, Calif., around CUDA. That’s where it announced CUDA-x86, as the new compiler software is called.

Nvidia created CUDA to take advantage of the parallel computing capabilities of its graphics chips. The graphics chips are able to process lots of things in parallel, or at the same time, compared to a microprocessor, which mostly works in a serial fashion. But CUDA allows the graphics chips to do non-graphics computing tasks that were formerly done by Intel’s chips. The more CUDA spreads, the more demand is created for Nvidia’s graphics chips. And, consequently, there is less demand for Intel’s chips. Looked at this way, CUDA is an attempt by Nvidia to defeat Intel, or at least rein in its ambition of dominating computing within the PC, without doing an Nvidia-made microprocessor.

There are some 250 million CUDA-enabled computers in the market, thanks to the inclusion of CUDA-processing hardware inside Nvidia’s GeForce graphics chips. Now, with CUDA-x86, CUDA will also run on Intel-compatible computers that don’t have Nvidia’s graphics chips.

“We can now run CUDA on any PC or server in the world,” said Jen-Hsun Huang, chief executive of Nvidia, in a keynote speech at the conference today.

CUDA-x86 attracts those software developers who want to reach a wider audience than CUDA can currently hit. Left unspoken is that CUDA is Nvidia’s thrust to beat back Intel, which has tried to take over Nvidia’s turf by putting graphics into a microprocessor with its latest chips, code-named Sandy Bridge. The tug-of-war between Nvidia, Intel and Advanced Micro Devices, is kind of like a thinly veiled Cold War between partners in the PC.

CUDA, viewed through this lens, is Nvidia’s bid to remain relevant by winning over the hearts of computer programmers through software that they can’t live without.